Abiy Has Lost His War but Ethiopia Could Reinvent Itself

By Matt Bryden and Rashid Abdi 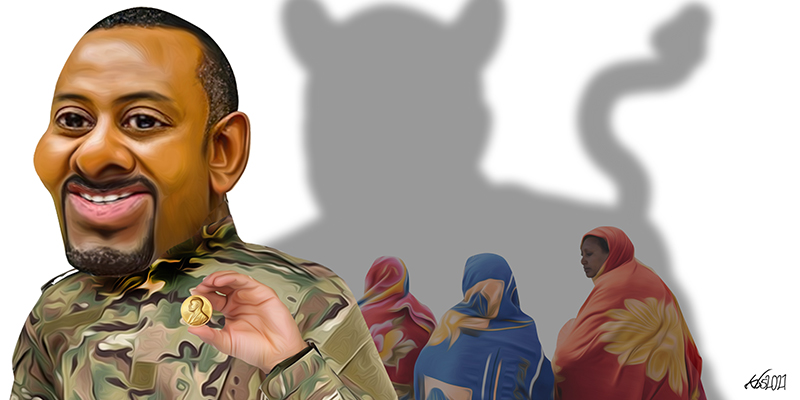 A coalition of Ethiopian opposition forces is approaching the gates of the capital, Addis Ababa, following a long, arduous offensive against forbidding odds. The Ethiopian army has effectively disintegrated, partly from major battlefield losses and partly from self-inflicted attrition as the high command weeded out and disarmed troops with ethnic ties to the Tigrayan and Oromo rebels. Addis is expected to fall in a matter of weeks, if not days.

The recent capture of Debre Sina – a town some 200 kilometres north of Addis – by the Tigray Defence Forces (TDF) and Oromo Liberation Army (OLA) triggered alarms in Addis and beyond. The Ethiopian capital is one of Africa’s vastest metropolises and has a population estimated at over 5 million. Western governments issued a flurry of advisories urging their citizens to leave Ethiopia, while numerous embassies, the African Union and United Nations ordered non-essential staff and dependents to quit the country. The US deployed special forces to nearby Djibouti as a contingency. The Ethiopian government, bizarrely, denounced such measures as malicious neo-colonial propaganda, an affront to national sovereignty, and called for pan-African solidarity in quashing the manifestly domestic insurgency.

Late last week, Prime Minister Abiy Ahmed announced he was heading to the front lines to lead combat operations and transferred executive powers to Deputy Prime Minister, Demeke Mekonnen. Two celebrity athletes, Feyissa Lelissa and Haile Gebreselassie, declared they would join the fight to defend the city. The Prime Minister’s apparent willingness to seek martyrdom in battle has inspired tens of thousands of volunteers, drawn from his hard-line “One Ethiopia” support base, to undergo hasty military training and dig trenches around the capital in anticipation of a ferocious – but familiar – grand finale. The war-unto-death martial paradigm has a long pedigree in Ethiopia’s blood-drenched political history. Emperors waged war without quarter and died in battle. It was either conquest or death. PM Abiy’s politics, rhetoric, posture, and self-belief seem almost eerily designed to reprise the country’s dark history.

The conflict in Ethiopia, undoubtedly, is entering its most dangerous phase. But fears of pitched battles in the capital between rival ethnic militias, accelerating the country’s violent slide towards chaos – or even collapse –  may yet prove to be overblown. Abiy’s boastful appetite for battlefield glory was taken down a notch when he appeared in staged videos on state television, supposedly leading troops in Ethiopia’s desolate Afar region, far from the fiercest fighting. Ill-trained and lightly armed volunteers, even in the thousands, are no match for disciplined, battle-hardened TDF troops equipped with heavy weapons and armoured vehicles. OLA units stationed around the capital, though less well-trained or equipped, could diminish any numerical advantage Abiy’s last minute recruiting drive might have achieved. A brief, orderly take-over of Addis Ababa is still possible.

The war-unto-death martial paradigm has a long pedigree in Ethiopia’s blood-drenched political history.

If so, then the battle for Ethiopia’s future will begin in earnest. Abiy and his supporters claim to be fighting to prevent the Tigray People’s Liberation Front (TPLF) from ever ruling Ethiopia again. Ironically, seizing power is the last thing the Tigrayans want. On the contrary many – if not most – have been so horrified by Abiy’s genocidal military campaign, and the enthusiastic support that it received from so many of their compatriots, that they seek even greater autonomy for Tigray, or possibly even secession from Ethiopia altogether. For the TPLF, the seizure of Addis Ababa is a limited strategic objective: a necessary evil to unseat Abiy, lift the devastating siege on Tigray, and secure their population against future threats. With Abiy gone, that will mean the TDF returning to Tigray to confront the Amhara militias occupying Western Tigray and the very real prospect of renewed conflict with Eritrea. The gravest danger to post-Abiy Ethiopia is not that the TPLF will reclaim the reins of government, but rather that they might abandon the capital, leaving the ill-equipped OLA alone to manage a perilous political and security vacuum. Likewise, Abiy loyalists in each of the regional states are also likely to be ousted, cascading uncertainty, instability and, tragically, violence down to the provincial level.

Post-Abiy Ethiopia will be a diabolically difficult country to govern. Abiy’s imperial conceit has unleashed even greater centrifugal forces. Having witnessed the hazards of federal overreach, regional states – with Tigray in the vanguard – are likely to demand even greater autonomy and devolution of powers – including security – to permanently weaken the centre. In some regional states, minority communities like the Qemant and Agaw may in turn demand some form of recognition or special status to protect them from domination and assimilation by ethnic majorities. The political, legal, and constitutional challenges involved in negotiating such radical decentralisation are almost impossibly complex and intensely emotive.

Abiy loyalists in each of the regional states are also likely to be ousted, cascading uncertainty, instability and, tragically, violence down to the provincial level.

International partners not only have a moral obligation, but also a pragmatic political stake in preventing Ethiopia’s descent into chaos. Rather than seeking to freeze the conflict with a ceasefire between implacable adversaries, the international community should concentrate on making the TDF/OLA takeover as orderly as possible, enabling the TDF to withdraw from the capital at the earliest opportunity, and helping to formulate a framework for national dialogue. International assistance will also be required in developing a credible mechanism for transitional justice for victims of war crimes and crimes against humanity.

A robust transitional justice intervention may be the only way to prevent another full-scale war with Eritrea, holding Isaias Afwerki, his commanders and party officials to account for atrocities committed by their forces in Tigray. But given the sluggishness with which international justice is delivered, and the lack of adequate enforcement mechanisms, this is a problem that the TDF may decide to resolve on their own terms.

Abiy’s war is lost, but Ethiopia is not. This conflict has indisputably left the nation weak, traumatised, and polarised, but it has produced no victor nor left any spoils. And it has confronted all Ethiopians with one inescapable truth: they must acknowledge their diversity or risk disintegration.