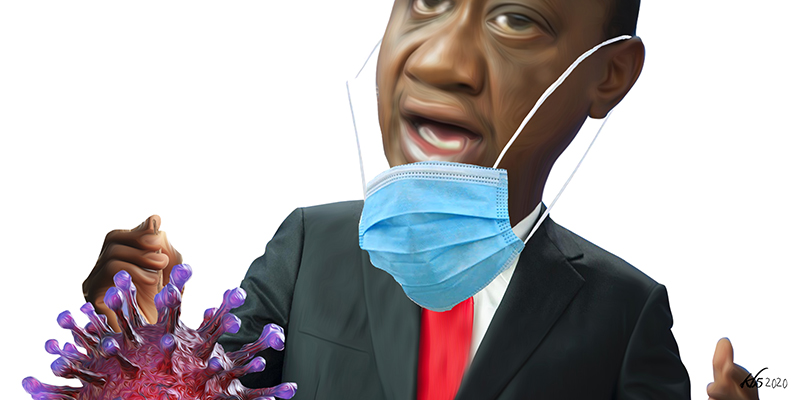 COVID-19 is here. Fatal errors have been made. People from Italy managed to travel to western Kenya when Italy was already the global epicentre of the pandemic. One of them was infected. This is unacceptable.

Last Sunday, the government suspended international flights and imposed mandatory quarantine. Passengers did not find quarantine plans in place. They were held up for hours, and then allowed to go home and report back the following day. The following day, they were shuttled from place to place for hours. Yet, the Government had given assurance that a contingency plan for every scenario was in place. This is not true. It was the usual public relations, then shambles. Unfortunately, we are accustomed to this.

Last week, in only your second address on the pandemic, you launched an Internet service. This was a serious error of judgment on your part, and distasteful opportunism on the part of Google. People are worried about food, and you call the nation to attention to launch balloons? Many Kenyans have accused you of being a prisoner of your privileged upbringing. Yet you continue to reinforce that perception. This was yet another one of many let them eat cake moment. It is one too many. Learn from it.

I do not know what your analysts and advisors are telling you but here is the low-down I think you need to have.

If the pandemic progresses to Europe level, we are sitting ducks.

The data we are observing shows that availability of intensive care (i.e ICU) beds is the most critical survival factor. Germany has 1.5 times more infections than France, 30,000 and 20,000 respectively as I write, but France has seven times (860) the fatalities in Germany (130). But it is also the case that Germany has 29 ICU beds per 100,000 people, three times France with 11.6 beds per 100,000 people, that is a 40/100 ratio. What this means is, for 100 people needing ICU beds at the same time, Germany will save most of them, but France could lose all 60 who fail to get ICU beds. In every country, deaths have risen sharply once intensive care capacity is exhausted. The UK delayed its emergency response. With only 6650 confirmed cases, a fifth of Germany’s, they already have two and a half times the number of deaths. But the UK has only 6.6 ICU beds per 100,000 people, less than a quarter of Germany’s capacity.

I gather that we have a total national ICU capacity of 200 beds. That works out to 0.4 beds per 100,000 people, or one bed for every 250,000 people. The global critical illness rate is at 4%. To exhaust our 200 ICU beds at this rate requires only 5000 infections. But many of these beds are already occupied; therefore the actual capacity that will be available is much less. We cannot afford 1,000 infections let alone 5,000.

Allow me to turn to the economy. As Kenyans watch other, mostly European governments roll out economic mitigation and social protection measures, they are wondering when their government will come to the rescue.

We could not be more ill-prepared.

You will no doubt recall that as Finance Minister, you rolled out an Economic Stimulus Package (ESP) to aid recovery from the 2007 global financial crisis and 2007/8 post-election violence shocks. You may also recall that the budget deficit at the time was running at below 4% of GDP, which left plenty of headroom to borrow and spend without risking macroeconomic stability. You will probably also be aware of a fiscal prudence rule of thumb, a deficit “red line” if you like, of 5 – 6 percent of GDP that should not be crossed for too long. You will certainly know that your government has been running a deficit in the order of 7-8 percent of GDP for six years now.

What this means then, is that we do not have the fiscal space for a borrow-and-spend fiscal stimulus. This year, your government has revised domestic borrowing upwards by more than Sh200b from a target of Sh300b at the start of the financial year, to the latest figure of Sh514b. The going just got infinitely tougher. Tax revenue performance which has been in decline throughout your tenure, is about to go in free fall. The deficit will rise regardless.

Ten days ago, I expressed the opinion that fiscal or monetary economic stimulus—what we call demand management instruments in economics— are not the appropriate response and argued instead for a “lifeline fund” to protect jobs. Several countries including UK, Denmark and the Netherlands have since adopted this approach.

What do I mean by “lifeline fund?” Let me use the simplest of examples — a hair salon or barber shop. Hair grooming is the very opposite of social distancing— and it can certainly wait. But thousands of people depend on it for their daily bread (ugali and githeri more like it). Most live day to day. How are they surviving?

The lifeline fund is first and foremost, a safety net for workers like these whose sectors are most badly affected. This is the government’s responsibility just as it provides relief to drought and natural disaster victims. These people, particularly those in the urban informal sector, have nowhere to turn.

Secondly, the lifeline fund aims to keep businesses, especially those that are providing essential goods and services open instead of closing because of low business. We want to avoid shortages that could encourage hoarding, heighten social stress, and drive up prices. Third, the more businesses we keep alive, the faster the recovery will be.

For people in Nairobi’s crowded informal settlements and elsewhere, who do not know where their next meal will come from, the language of social distance and on-line working comes across as a cruel joke. We already have volatile powder keg of gross inequality and social exclusion, and as I already remarked, you personally have reputation for elitist insensitivity. If people get hungry, the soldiers you love to turn to will not help you. Let us not tempt fate.

I have estimated in an op-ed published today on The Elephant that a lifeline fund in the order of 0.5 – 1% of GDP or Sh50-100b would be sufficient to save the situation. But having already argued that it is not prudent to borrow-and-spend, I am obliged to offer suggestions on how else this might be funded. I see two options.

The first is budget reallocation within the existing deficit by (a) drastic cutback on development projects and (b) mothballing non-essential functions thereby freeing up some non-wage recurrent budget. Certainly, monies budgeted for international travel; workshops and public events can be redeployed immediately. This will require political resolve and execution discipline, the lack of which has been the bane of your government. Time and again, austerity plans are announced, but not followed through. You do not have that luxury anymore. You can no longer kick the can and hope that we will muddle along until it becomes someone else’s problem. Mr. President, your luck has finally run out. If you do not impose financial discipline, you are looking at a financial meltdown in a few months, if not sooner. That will be your legacy.

The second is external finance. The IMF has stated it can avail $57b quickly to low income and emerging markets. If it was shared pro-rata between low and middle countries based on GDP, our share would be in the order of Sh18b ($180m), significant but inadequate in the context of the revenue shock referred to earlier. The Prime Minister of Ethiopia has appealed to the G-20 to advance Africa $150b in emergency funds and to write off debts. I am of the view that African leaders should unite around a moratoriam on debt repayment to official creditors (i.e. multilateral and bilateral lenders). New money even if it could be made available, which I doubt, couldn’t come fast enough, and all sorts of paper work would have to be prepared. The same applies to debt write-offs.

A debt service moratorium on the other hand is equivalent to budget support with money we already have. It is a case of a bird in hand being worth two in the bush. Moreover, on this, it is we the debtors who have the leverage because we can’t pay. Won’t pay is an option.

Our foreign debt service budget to official creditors for the coming financial year is in the order of Sh220b. I propose you reach out to Prime Minister Abiy and work together to champion this alternative.

The next question is how would the lifeline be delivered. The western countries are offering partial salary subsidies, up to 80 percent in UK to companies that keep workers on payroll. I think we should do it differently, for two reasons. First, I need not belabour that the government is broke. Simply put, they are rich, and we are poor. Second, and to my mind more importantly, it will be very difficult to target grants efficiently and fairly in our predominantly informal economy. If money is free, demand will overwhelm supply, and if truth be told, the corruption opportunities are beyond measure.

For these reasons, I propose that the lifeline fund be in the form of a very soft loan with long grace period (6 – 12 months) and reasonable tenure (3 – 5 years). The amount should be a fixed sum per employee and disbursed monthly over a fixed term. Should be entirely linked to the number of employees to the loans should be made available to both workers (as check-off loans) and businesses (business loans). To illustrate, working with a figure of Sh30,000 per worker per month for four months, a restaurant with 10 workers would be entitled to borrow Sh1.2 million. If shared equally between the business and workers, and is interest-free over five years, the business would repay Sh10,000, and the workers Sh500 a month each once the crisis is over. The screening of eligible businesses and actual nitty-gritty of loan administration should be left to banks.

In conclusion Mr. President, allow me proffer what I think are your leadership imperatives:

Mr. President, you need to get your act together for this. This is our last big ask from you. It’s also your last scene on the big stage. God knows your performance has not lived up to its billing—and that’s being polite about it. It is your chance for public redemption. It many not matter to you, but it matters to us— to the thousands, maybe millions of lives at stake. Stop listening to your buddies, sycophants and frontmen for commercial interests. You will not get away with throwing up your hands and asking the public what they expect you to do.

The race is not to the swift, nor the battle to the strong, neither yet bread to the wise, nor wealth to men of understanding, nor favour to men of skill; but time and chance happens to them all. For surely no man knows his time. Like fish caught in a cruel net or birds trapped in a snare, so men are ensared in an evil time than suddenly falls upon them. (Ecclesiastes 9:11-12)