Death by a Thousand Small Cuts: The Problem with Low Quality Oppression

By Christine Mungai and Dan Aceda 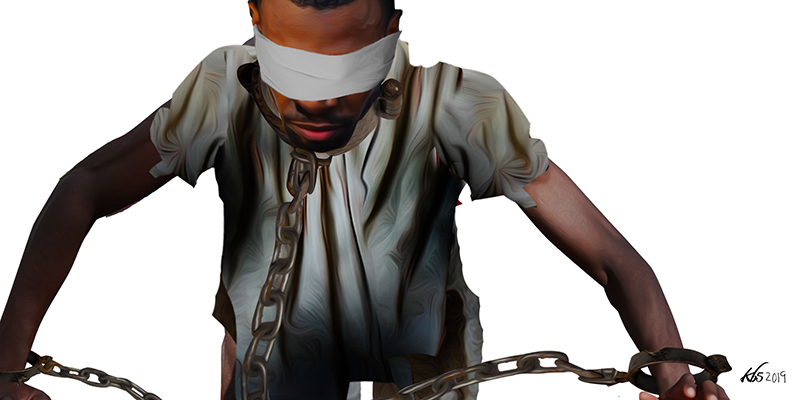 In 1961, in the year he died aged just 36, the philosopher Frantz Fanon published The Wretched of the Earth. It is a text that is as searing as it was prescient. With the clarity of an ancient prophet, Fanon expertly diagnosed the intellectual laziness, moral vacuity and spiritual penury of what he called the “national bourgeoisie”, the class of wheeler-dealers that was left in charge of African nations with the departure of colonisers.

Fanon wrote of a class that was bereft of ideas, that was caught up in “activities of the intermediary type”, scheming and hustling, but firmly entrenched in the role of business agent of more powerful, former colonial powers. The national bourgeoisie, he said, was already senile before it ever came to maturity. Its members were following their Western masters along the path of negation and decadence “without ever having emulated it in its first stages of exploration and invention”.

Fanon’s treatise came to mind when a few weeks ago, a Nairobi driver was pushed off the road by a convoy of siren-blaring “escorts” of an Important Person who made her, the driver, veer into a ditch and then drove away. It later turned out that the car belonged to the office of the Director of Public Prosecutions (DPP). It is ironic that a driver of such a high-ranking judicial office could behave in such a thuggish way. Or is it?

This “colonial mental disorder”, as Fanon would call it, is in our view, a broader problem that we call “low quality oppression”, whose insidious effects are more serious than you might imagine. And yes, it’s odd that we have reached the stage where we can rank and rate oppression the same way we give stars to online products.

This was by no means an isolated incident. Siren-blaring road bullies seem to be everywhere, flagrantly taking to the opposite side of the road to escape traffic, and seriously endangering other road users. Drivers may grudgingly give way, or refuse to do so as a small act of resistance. And why can’t the Important Person leave home early like the rest of us? What are they rushing to do? Is it to “network” or “benchmark” something or other?

You see, in this part of the world, it is common for extremely important but low-level government services to get stuck in a bureaucratic process because “mkubwa hayuko” (the Important Person is not around).

This “colonial mental disorder”, as Fanon would call it, is in our view, a broader problem that we call “low quality oppression”, whose insidious effects are more serious than you might imagine. And yes, it’s odd that we have reached the stage where we can rank and rate oppression the same way we give stars to online products. But this is the reality of living in this country at this time. Our reality can be so dire sometimes, that with all manner of oppression attacking from all sides, we must prioritise. Do we first deal with nepotism, profligate spending and outright theft in government, or do we pause a little and first push through the application for a birth certificate?

You see, in this part of the world, it is common for extremely important but low-level government services to get stuck in a bureaucratic process because “mkubwa hayuko” (the Important Person is not around).

Let us analyse this for a minute. Imagine that a dearly beloved family member passes away peacefully in her sleep while in her hut (in what we call home squared). In order to move the body and to begin burial preparations, we need to get documentation from the local area chief. This is now our mkubwa. Now, the mkubwa might not have anything against you personally. He may not even know you. The mkubwa might even be willing to sign or stamp whatever it is you need signed or stamped. But somehow, going by how the system works, the entire process hinges on his physical presence at his desk. Without this, the whole process grinds to an unfortunate halt.

For instance, what do we do if the death occurs on a Friday and our mkubwa has left early so that he can visit his family in a different town (because such officials are usually not locals, which presents another unnecessary obstacle as they cannot be located once they have gone “home”)?

There might even be people in that office whose main task is to tell you, “I’m so sorry, mkubwa hayuko.” There’s nothing else they really do at work other than creatively manage the frustration levels of people like you.

The problem here is that you, the frustrated party, cannot really think your way around this obstacle. You could demand to be served, invoking your rights as a citizen or customer. You could walk away angrily, and resolve to come back another day, earlier this time. Maybe if you are first in line at 8am this will be sorted. You could write a screed, maybe on Twitter, about how people should be at their desks and it is wrong to keep someone waiting like this.

In this scenario, there is little you can say substantively after angrily sputtering about it. There is no nefarious genius here, no diabolical mastermind with a plan to subjugate your entire country, no systematised thinking to grapple with, just a kind of low-grade, repetitive, diffuse dysfunction. It is death by a thousand small cuts.

But when you are done, it’s deflating, because it is stating the obvious.

There is no ideological meat here. There is nothing to wrestle with intellectually. It is petty, and ridiculous, but mostly petty.

In this scenario, there is little you can say substantively after angrily sputtering about it. There is no nefarious genius here, no diabolical mastermind with a plan to subjugate your entire country, no systematised thinking to grapple with, just a kind of low-grade, repetitive, diffuse dysfunction. It is death by a thousand small cuts.

The problem with this low quality oppression is the way it clouds your mind and robs you of language, precision and analytical power. And it keeps you busy dealing with it so that you cannot even properly engage with more systemic problems, like the ever-expanding black hole of the mindless plunder of public funds – the mysterious disappearance of 51 million litres of aviation fuel worth Sh3.4 billion ($34 million) from the tanks of the Kenya Pipeline Company; the Sh180 billion unaccounted for at the power transmission firm KETRACO (which works out to 3,200 kilometres of power transmission lines never built), or the companies contracted to supply kitchenware and towels to build dams.

Where is the time to investigate and mobilise while you have to smuggle your departed relative’s remains out of the village to a morgue at night?

Vernacular (adj.) [of language] spoken as one’s mother tongue; not learned or imposed as a second language.

In the place of analytical precision, we have instead a deluge of what Keguro Macharia calls “political vernaculars” – terms that frame the conversation we can have without considering what they look like in practice, whose freedom they impinge and who is paying the cost for them. They are vernaculars because they come as easily as a mother tongue. They are not imposed as a second language; instead they form the primary frame of expressing our political issues.

“Corruption” is one such dominant political vernacular that houses all our collective anger and anxiety of living under a political system where outright theft is the order of the day. “Development” is another political vernacular that is the repository of all our dreams and what we want to be. These two act in concert with each other, disciplining our minds and tethering our freedom dreams, taking them down the same, predictable path.

These terms – “corruption”, “development”, “tribalism”, “negative ethnicity” – seem self-explanatory but are actually very vague, and their enduring power is in creating habits of the mind and of speech. Produced by powerful yet shadowy forces, they determine what is thinkable. They are flimsy yet strong, like a spider’s silk enveloping us all in a garment of mediocrity.

As a result of this hollow phraseology, Kenyans are walking around in shambles and are unable to even describe the state of their own dishevelment, as John Githongo once said.

For all of the overt traumas that the African diaspora has experienced in the so-called New World, there is something to be said about how being in that space has created a tradition of intellectual clarity and radical truth-telling – parrhesia in Greek. This is perhaps why the writings of writers as diverse as Zora Neale Hurston, James Baldwin, Toni Morrison, Ta-Nehisi Coates and Kiese Laymon are crisp and searing – these writers write out of a particular context that puts blackness in sharp relief. The contours of injustices that have been visited on the black body, in particular, are clear. Bodies have definitional clarity; they have shape and form; they occupy space and time, and so can be, so to speak, grappled with.

But in our context, our petty tyrants share physical qualities similar to ours, they invoke similar genealogies, and they bandy around slogans that we too want to believe in, like “independence”, “sovereignty” and “development”. They misappropriate the same terms we use to express our freedom dreams.

Even sacred texts are fair game for definitional hijack, perhaps more than any other kinds of literature. Kenyans, even church-going types, can hardly remember that the term Jubilee comes straight out of the Old Testament in Leviticus 25, in which every 50-year debts were to be cancelled, land returned to the original owners, and the gap between the rich and the poor in Israel leveled out.

However, in a kind of cruel joke, Jubilee (the political party) has presided over the swiftest racking up of debt in independent Kenya, and a systematic and comprehensive concentration of political power and business interests of the elite, specifically the Kenyatta family. Kenya celebrated its 50th anniversary in 2013, but there would be no liberty to the captives or restoration of the indebted – in fact, just the opposite.

In the words of Kalundi Serumaga, we are hostages of this venal, idiotic class that harps on about sovereignty and independence because all they can do now is enclose us in these colonial borders. They have nothing left to offer; there is no originality.

“When this caste has vanished, devoured by its own contradictions, it will be seen that nothing new has happened since independence was proclaimed, and that everything must be started again from scratch.”

“It must not be said that the national bourgeoisie retards the country’s evolution, that it makes it lose time or that it threatens to lead the nation up blind alleys,” wrote Frantz Fanon in The Wretched of the Earth, “… in fact, the bourgeois phase in the history of underdeveloped countries is a completely useless phase.”

“When this caste has vanished, devoured by its own contradictions, it will be seen that nothing new has happened since independence was proclaimed, and that everything must be started again from scratch.”

This is the space our petty tyrants are operating from as they push us out of the road with arms flailing out of four windows, mean looks, and sirens blazing.

Which oppression do we fight first? Is it the two-star one that makes people smuggle their relatives to mortuaries at night? Or is it the one where the entire public finance management system is razed to the ground in an inferno of brazen theft and worthless vanity projects? Is it possible to do both?

And most of all, where do we get new words?