South Africa: No One Should Use Our Rage Against Us. We Own Our Rage. 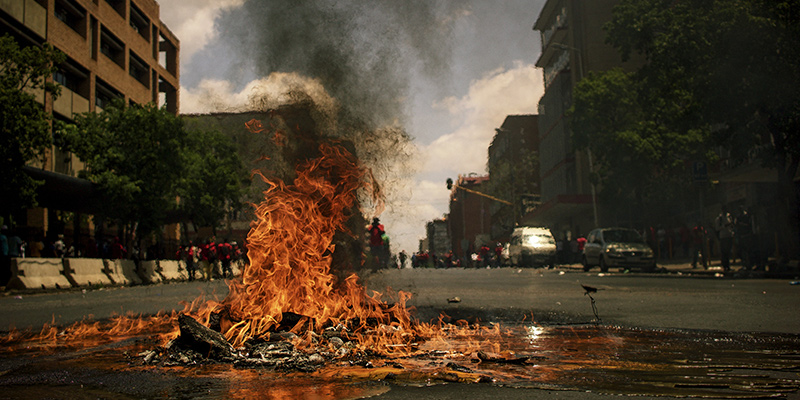 Two of South Africa’s most populous provinces are on fire. Others teeter on the brink. Together with many others who are observing this iteration of the smoldering blaze, I am caught in the confluence of all kinds of emotions. My sisters and their children live at the center of the fire that is raging in Pietermaritzburg. They are terrified. Even though I am observing the fires from Maputo, their horror at the destruction is an affect that they have drawn me into as well. Social media is flush with the devastating images. Acquaintances have lost businesses that they remain mired in debt over. I have internalized the fear of my family and others whose terror I watch on Twitter. In moments of life altering change, we are usually counseled to sit respectfully and to learn from the experience. For this reason and because I am depleted by the effects of COVID-19 on African lives, and as a consequence of the conflicting emotions jostling within me, I had decided to be quiet and to learn.

Over the past decade, I have been thinking of the rogue emotion of collective rage that occasionally surfaces and sweeps us in its wake. For this reason, Pumla Gqola tweeted asking that I remind tweeps about the work of collective rage in this moment. I write in response to this invitation to think through the lessons of rage and its fires. To begin with, we might think of rage as intentional and networked anger rather than as a free standing emotion. Rage builds on sedimented anger but it is not reducible to anger. It transforms individual grievances into shared problems and structures anger into collective action. In the words of Fred Motem, rage is love and care under duress. This is because it forces the downtrodden to choose themselves and assert their presence even when the world has blotted them out.

To rage is to say, “fuck it, I love myself too much to allow this.” Steve Biko reminded us that we are either alive or dead and when we die, we don’t care anyway. Rage is patterned on history because the grievances build up over time and their expression finds resonance with old and evolving forms of protest. I do not have to remind the reader of just how deep South Africa’s protest history goes and how it folds into and out of social sanction and respectability—attributions of good and bad. Following the old feminist adage, the personal (anger) becomes political (rage). Because of what it represents and does, property has always been the target of rage.

These protests and looting bare the hallmarks of rage. Unemployment sits between 60 and 80 percent among black youth. Many are unemployable. They watch us live comfortably and they see the excess of jet setting Moet lives. Businesses come to squarely represent excess. They’ll never get jobs at a shopping centre or mall from which they are routinely chased out and seen—with justification at times—as potential thieves. In Pietermaritzburg there are tons of young men that sleep on the streets, in parks, under shop awnings, bridges, road overpasses, and the city’s cemeteries. Everyone knows to look out for the “paras” despite this being the seat of the unseeing provincial government. The “paras” broke into my sister’s house twice while the family slept. The children are traumatized. The “paras”want food. Some take drugs to numb the pain. And then they need money to buy the drugs. Because they already live in the street, their fate is not tied to the cashiers and waiters who work at the burning shopping centers. This is to say that if their mothers and cousins lose their jobs as a consequence of a burned shop, this will not have material bearing on their overlooked lives. And those who are not homeless already live precarious lives. They see the dimness of their futures.

When someone strikes a match and invites them to take from the shops, the young people are more than ready to rage and eat. Even if for a day or two. The feeling of fleeting control is priceless. To watch the things that taunt and mock you go up in flames is to finally experience the adrenaline of living. It is to turn the world upside down so that we can all feel the destabilizing effects of marginality. With or without shops in the neighborhood, they will always experience hunger and humiliation. So they don’t believe that they are cutting their own noses. Today is their day. For today, it is we who are terrified and uncertain. Tomorrow they will watch us rummage through the ashes. They know the feeling too well. They live in urine stained ashes.

With reference to the Vietnam war, Spike Lee’s protagonist in Da 5 Bloods says “No one should use our rage against us. We own our rage.” It is apt here. Jacob Zuma and his children have attempted to own the rage of the unemployed. Those they forsook and overlooked when they led the rampant feeding at the trough of political patronage. Now they seek to use the rage of the forsaken to fight the reckoning that must follow reckless and wanton corruption that robbed the poor and swelled the ranks of the unemployed. They lit the match and tossed it. It has landed on dry tinder. Now the flames are engulfing us.

On this precipice, we too have to sit with the warning. “No one should use our rage against us.” As the middle classes and the tenuously employed working classes, do we hit out at the raging youth or do we help in closing the growing gulf between the poor and the wealthy. Not through slogans about old Stellenbosch money, but our own money, political decisions, and privilege that we use to build walls around our properties. Even if we got our hands on all the white Stellenbosch money and imprisoned apartheid generals and war mongers, our problems will not be overcome. Not to use the rage of the unemployed calls on us to end our problematic relationship to property and to recenter the public good. It is insufficient to take care of our families and to complain about black tax. It is to take seriously that the raging youth own their rage and that it is an expression of their self-love under duress. We might condemn their destruction of property but to take rage seriously is to reconsider the social role of property not as enrichment but as public good. This moment is one of reckoning. It shines the spotlight on the government’s ineptness, the fissures between us, and the violence of property.

Perhaps the rage will die down in a few days. Rage always burns itself out. But all it needs are reckless political feeders who thrive on attention and self-importance to light the kindling. Proxy political battles, xenophobes, fascists and others will fill the yawning fissures of inequality. We will return to this place again. We have been here before. Those old enough to remember the fires of the 1980s and the transition years know the fires of rage. Those who came of age in the 1970s nurse the burns of the Soweto and Langa uprisings. The Durban strikes. And earlier still, in the 1960s, the Mpondo revolt and Sharpeville massacre had their own fires. The women who marched on the Union Buildings know the heat of rage.

To riff off James Baldwin, there will be a fire next time. The embers and kindling are in place. What matters is what we do between this fire and the next.