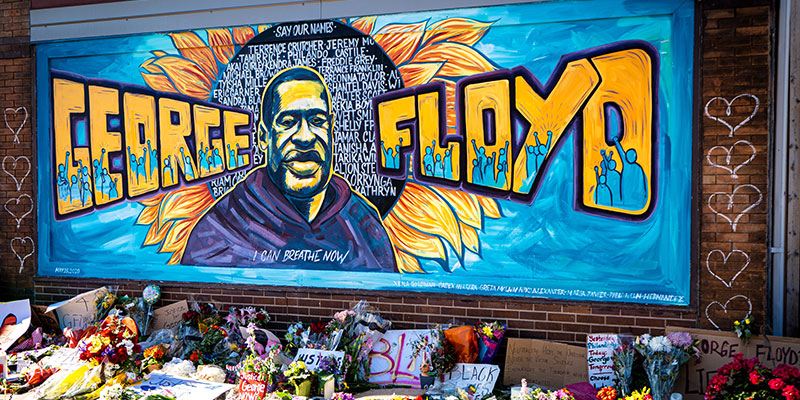 I watched Ma Rainey’s Black Bottom for the second time while waiting for the verdict in Derek Chauvin’s trial for George Floyd’s murder. The film focuses on Ma Rainey, an influential blues singer, and dramatises a turbulent recording session in 1920s Chicago. I was looking for escape.

The trial of Derek Chauvin was emotionally draining. It was also scary because of the very real possibility that Chauvin might walk free. And George Floyd would become just another statistic. Just another black man losing his life to a mix of police brutality and racism. We waited for the twelve jurors to do the right thing. To look beyond the skin colour of the executioner and the executed and give us a reason to believe again in the promise of justice for all. The jurors chose the right side of history.

I was looking for a good film with a strong black cast, and for literature by leading contemporary black intellectuals to provide me with perspective, a sense of reality, and hope during the trial.  So I settled on Ma Rainey’s Black Bottom, on Barrack Obama’s Dreams From My Father and Ta-Nehisi Coates’ Between The World And Me.

Ma Rainey’s Black Bottom was an opportunity to witness black excellence on the screen, characters navigating America by their wit, pain, industry and love. I did not know much about Ma Rainey the artist before watching the film although I had heard about her pioneering work as a blues artist. And so I was looking forward to rediscovering her, and to once again paying homage to Chadwick Boseman, thanking him again, bidding him farewell a second time. My stomach was a knot of emotions, churning with excitement. But there was also a tightening in my chest. To look for closure for George Floyd in the beauty, the finesse, the artistry of Chadwick Boseman was quite an emotional trip.

The film turned into something else for me. It turned into an institution of higher learning. A thesis presentation by Levee, Chadwick Boseman in the character of a virtuoso trumpet player, who shows us how the anger and helplessness, the rage of young black men and women, robbed of their industry and creativity by white men, consumes them, sending them into self-destruction and to the destruction of those around them. Through Levee’s reflections on his life and the conflicts with the other members of Ma Rainey’s band, the film brings to life in a very dramatic and tragic fashion the destruction wrought by generational trauma. It calls us to be acutely aware of the trauma brought on by the murders of black men and women, the murders of men such as George Floyd. The film warns us to protect ourselves, to guard from descending into a murderous rage like Levee, where we end up killing our fellow blacks while those who profit by the actions of white supremacists continue to enjoy the fruits of our industry. We need to creatively self-preserve even as we relive the trauma of George Floyd’s murder during the trial of his murderer.

Reading Obama’s Dreams From My Father, which permeates with hope for an equal America, reduced the anxiety that came with this trial. Revisiting the path of Obama’s early life and his ascent to the White House was refreshing, a reminder of the convergence of goodwill from the entire fabric of this great nation that propelled the young Obama, raised without a father, to the highest office in the land, provided a break from the intensity of the trial. I was very hopeful of a conviction. But I was also alive to the reality of Michael Brown in 2014. And the strangulation of Eric Garner. And Alton Sterling. And the execution of Breonna Taylor in her bed. The black bodies riddled with bullets kept piling up. The police kept walking free, unaccountable for their actions. A litany of deaths until the graphic murder of George Floyd shocked the world back into the reality of the systematic elimination of black men in America.

Donald Trump’s presidency, and the blossoming of white supremacy, might cause the hope expressed in Obama’s book to seem distant but it was a welcome break from the intensity of the Chauvin trial. We needed hope to cling to. Hope that justice might yet prevail, a life jacket in the tumultuous waters that are America for its black people. All our hope was in the twelve jurors. Did they share our hope for a better America. Could we trust them to do the right thing? Who were the jurors? What were their politics? Did they believe that black lives really do matter?

Reading Ta-Nehisi Coates after Obama felt like being sucker-punched into reality. I had to compose myself. How could these two black scholars have such distinct and diverse experiences of America? How could Ta-Nehisi Coates walk under such a heavy yoke of historical trauma and Obama with so much optimism? Where was the magic switch to turn the darkness into the bright dawn of promise? Where did Obama find this switch? And what realities and historical traumas accompanied Ta-Nehisi in his daily living as a black man in America, reminding him that this optimism only existed as a hopeful comfort in our imagination?

Obama’s book, I would later conclude, was one that was hopeful for a perfect union. Just as his body was a beautiful union of an elegant African man and an elegant white woman. Both blessed with a great education and a superior understanding of the world. But could America let Obama be the embodiment of this perfection? It would not. He could only be black. The prescription of race was waiting for him at birth. This prescription was meant to place him in a world that America treated differently. A world where he could not enjoy the privileges that his mother was born into, even though he was hers, the product of her womb.

Ta-Nehisi Coates on the other hand embraces the reality that things are broken. The way Ta-Nehisi Coates relives the trauma of what happened to his friend and compatriot, Prince Carmen Jones, is as painful as when Darnella Frazier, the teenage girl who witnessed the murder of George Floyd, relived the trauma and her helplessness at the scene. All Darnella could be was a witness. With a cellphone. Incapable of providing any help because the force that was on George Floyd’s neck was the force of hate. Of white supremacy. A force that had taken so many black bodies. And was emboldened by the justice system to take many more.

Ta-Nehisi  Coates writes that Prince Jones was stalked by a policeman across multiple jurisdictions and state lines before he was shot. Prince Carmen was educated, God-fearing and successful. When the man the killer police had allegedly mistaken Prince Carmen for was arrested, he did not look anything like Prince Carmen. The only plausible explanation for Prince Carmen’s killing was that the black policeman who killed him was only aware that he carried the authority of the land that did not value the life of the innocent black man that he had tracked like wild game. He was aware that being a policeman was the licence that would get him his job back without having to account for his actions.

On the other side, within the black community, the policeman’s actions left a colossal loss. The loss of years of investment in Prince Carmen. The loss of a brilliant future. The loss of the only son. A lifetime of trauma for his parents’ generation. His friends’ generation. Trauma in the many generations of blacks to come. And a chilling reminder that black lives are dispensable. Ta-Nehisi Coates was reliving this historical trauma for his son. Reminding him of the space he occupies as a black man in America. This was the reality of black America. For many generations to come, fathers and mothers would relive for their children the trauma of watching George Floyd begging for his life under Derek Chauvin’s knee. As long as these killings continued, the trauma associated with them would never leave the black communities. I realised that I couldn’t escape it either. It was deeply embedded in art. In literature. In film. A reminder that hope was just but temporary relief, a mirage before the next execution of a black man.

Does trauma heal by itself?

Obama’s book promises hope as a pathway to healing, reminds us to give hope a chance and continue believing in the collective goodwill of humanity. But Ta-Nehisi Coates reminds us that no one, regardless of their social standing, is safe from police brutality or the miscarriage of justice that follows in the wake of the brutality. And that the trauma of witnessing these repeated acts of brutality against black people stays with us forever, no matter how well educated or successful we are.

Ma Rainey’s Black Bottom is a warning about the destructive impact of the generational trauma suffered by black people in America from past encounters with white supremacy and the miscarriage of justice that soon follows. It is also a warning about what seeing George Floyd laying there, pleading for his life, could do to our collective psyche as black people. And a reminder of how the loss of black industry and art at the hands of white people in positions of power has a lasting negative impact on everyone.

Derek Chauvin is appealing his conviction and we are waiting to see if there will be another trial. But his conviction has brought some hope that the wheels of justice may have received a tiny drop of oil and will continue turning, moving inexorably towards justice and towards a more perfect America at last freed of the generational trauma of witnessing police brutality against black people.