To the Brothers and for the Women in Our Lives 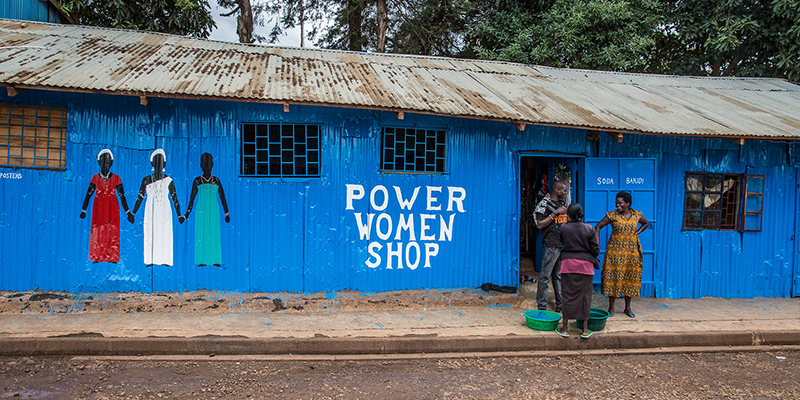 Since childhood, my great aunts, my grandmothers and the older women of my clan have referred to me fondly as their husband. “Nga uyu mundu wange,” here is my man, here is my husband, they would always remark in Maragoli whenever we met, never failing to claim this very unusual relationship to me with the biggest village smile on their faces. This, if you can imagine, was one of the few things that didn’t exactly excite my curiosity as a teenage boy. They were women in whom I had unquestioning trust, but what kind of humour! I could not understand where the grace of a woman that old had gone for her to say such a thing. Why? How? It was something too big for my brain to bother with at that time. Now that that boy is a few years older, the message is decoded from the different words of another group of Maragoli women in a closer space and time.

Highrise Estate Kibera is a special place to me. Apart from being my refuge during times when “the situation” seems unbearable in the adult world, where I retreat to the cradling love and care of my aunt and my cousins, it also happens to be a space where I get to experience the village from my interactions with Maragoli laundry ladies. There are a lot of Maragolis here, and most of them live on the other side of the wall in Soweto Kibera — where the real ghetto is. The lives of the people of Kibera, how they make a living, you will find very interesting.

In the early hours of the day, Mbagathi Way’s pedestrian paths might easily be mistaken for the venue of a serious racewalking event as Kibera residents — Nairobi’s labouring class —  race past each other as they trek to Industrial Area. At around mid-morning, the journey becomes shorter for some, those opting to make stops midway as others turn back all the way. While it might seem like a foolish thing for them to do, it is a well-informed decision.

Some of those who woke up earlier are on their way back, they need not say anything about where they’re coming from. Neighbourhoods such as South C, Nairobi West, Madaraka Estate and finally Highrise Estate become their checkpoints; you never know, someone might need a parking lot swept, a house cleaned, some laundry done, some dishes fixed. No functioning human being wants to gamble with energy they lack the resources to replenish. So they change direction, reversing from an industrial vision to a domestic one.

Women are the majority among those changing direction, coming back home, not because their muscle mass will not allow them to finish the race early enough, but because it has made them unsuited for the roles industrial work provides for the labouring class.

When the COVID-19 pandemic hit us in early 2020, a lot of women in the employment class just above the labouring class started working from home; a good number of them were sent on compulsory leave without pay. With less cash at their disposal and more time to spend around the house, many of them had to let go their domestic workers. Were they to go back to the ghetto? In Highrise, at my aunt’s and the neighbouring blocks, these women sit outside their sources of employment.

A keen eye will easily lead you to the Maragoli laundry ladies’ base in the area. You will see them seated next to water jerrycans and buckets, stoically bearing the Nairobi heat as they wait for the few opportunities available to them. When the pandemic was at its peak in mid-last year, some of them would go for days without finding a single client, but still, they would not ask for anything from the people they knew. Rather, they hollered out at them like friends and would only insist on us promoting their side-hustles. One such woman is Maggie.

Maggie, a middle-aged woman with a son she recently disclosed to me was in medical school, would shout out to me, “Maragoli!”, caring nothing about whether I was a block away or just on the other side of the road. She would easily convince me and my cousins to buy a few of the avocados she was selling, it mattering not to her whether we had ready cash; we would pay when we had it.

From being her customers, our relationship with Maggie grew over the months to that of neighbours who have no problem commenting about how the other is looking today — not flattery, just raw, honest village banter brought to the city. Recently, Maggie made a personal comment about me; she said, “Sahizi mwili wako unaonekana vizuri, last year ulikuwa unaonekana na wasiwasi sana”, now your body appears alright, you had lots of worries last year. This was weeks after another powerful remark made on the first day of February 2021. Remarks that decoded the message in the words of the women who claim me as their husband back in the village.

“Genye’kana munyo’re zi’gasi mtange’ kuhinzira.” You are supposed to find jobs and start working, functioning, Maggie said to me and my older male cousin late that February afternoon. I had no idea what observations led her to utter such remarks, but they were delivered in a tone so light that we almost laughed. So detached was her position as she made them that it would have been really easy to miss the concern and interest she had for us. And it bugged me, more than the thought of being my grandmothers’ husband bugged me as a young boy. It did not help that both of us had quit our jobs a few months before the pandemic exploded to “focus on our art”. What humour! Why would she say that to me? Now this appealed to my sense of curiosity just as it confounded me. Was she simply asking us to find jobs so that we could in turn provide employment opportunities for her? Was she encouraging us to keep on looking for opportunities and not give up? Or was it a witty rebuke to Maragoli youth walking around the estate in the peak of the afternoon, pretending to be in the same position as her, lacking opportunity?

I remain unable to place these remarks. Nevertheless, if Maggie Maragoli sees me essentially as a Maragoli man then, truly, I am her husband. The women of my clan must have been teasing me with the responsibility that comes with being a man in the community. That as a Maragoli man you are answerable to more than one woman in your life; your functioning does not just benefit the woman you raise a family with, it is essential for the whole community’s prosperity. It might also be that we fit the image of the man Maggie would like the daughters of the community, her daughters, to have, and that she is playing her role in moulding these functional partners. Whatever the meaning of the remarks, they remain a response given in an attempt to show direction.

Only one message is clear.

A deep concern seems to be building up among a group of women from the ghetto. Not about themselves, not about their children, not about anyone really close to them. Just their husbands. A concern that manifests itself as a wound, an old wound, a very visible wound which regenerates into the painful thing it was many years ago when it was first inflicted by our fathers. We, their husbands, are that wound.

In the ghetto, Kibera at least, based on the selective principle industries apply in recruiting workers of the labouring class and the number of women in domestic work, there are more men in meaningful employment than there are women. Is it, then, beyond us to say that when the vision for women is reversed from industrial roles to domestic roles in the labouring classes of capitalist systems — worse in a corrupt country — the people become poorer?

Oftentimes, I find myself promising to give something back to these women in the future. I want to make them happy, these distant but very present wives of mine, these very close but physically distant wives of mine, for the priceless education they have given and continue to give me. But time is limited, and it would break so much to go beyond oneself, I am just one among many men of the community. And what makes me think that I carry the key to their happiness!

The surest thing I could give is my ear.

I get it, I think, I feel as though I have gained understanding. I have to function.

We were made husbands before we became men, and it might benefit us a great deal to restore the trust we once had in the guidance given to us by the women in our lives. Our mathes, our sisters, our senjes, our gukhus. These women whose presence, physically, emotionally and in memory, has never failed to check us at every stage of our growth as human beings. We should trust the women in our lives to give us direction, not answers, on what proper manhood looks like.