Coronavirus Outbreak out of Control in US 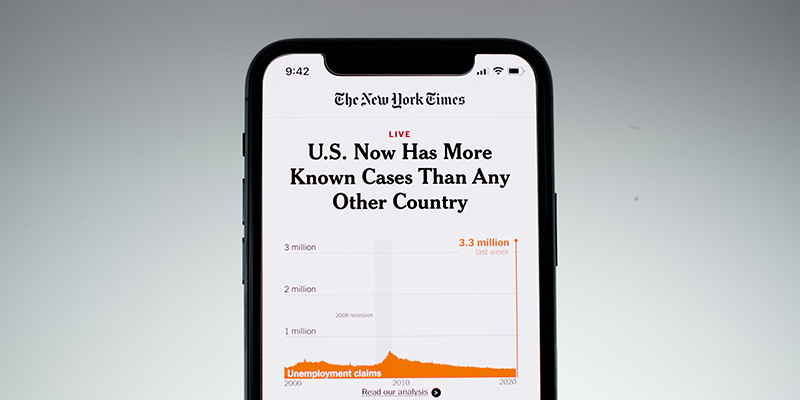 In 2014, I spent more than six months covering Ebola in West Africa, two of them in the “hot zone” of Liberia. Global press coverage spurred clichéd response back home in the USA, from negative stereotypes about culture and hygiene to irrational panic. This is a piece of satire that imagines covering America’s global health emergency in the same way the US looked at one “over there”—revealing both the absurdity of imperial exceptionalism and the unwelcome fact that the weaknesses of the American “superpower” are not so different from those in so-called “s**hole countries.” But of course they are. Yet most of us are schooled to see the familiar as better than the foreign, and it’s easy to forget that we share the same weaknesses—and the same risks—as those we are taught, implicitly and explicitly, to see as less capable, less valuable, less worthy.

A new, deadly disease is exploding virtually unchecked in the United States of America, threatening the global economy and public health worldwide.

The US, as it is known, is the largest economy in the world, a position secured unfairly by its imposition of the US dollar as the global trading currency. The country regularly styles itself as “the leader of the free world”.

That leadership has failed miserably in recent weeks, as a pathogen known as SARS-CoV-2, or “coronavirus” for short, has spread, with very little detection, across the country of more than 300 million people.

“It’s spreading like wildfire from person to person,” said Papi Kabongo, a bus driver in Kinshasa whose uncle, Jean-Jacques Muyembe, discovered Ebola in 1976.

“There are clear, simple, easy things we know can help, but people there don’t listen. They don’t even wash their hands!”

The spread has largely overrun the country’s crumbling healthcare system and outmanoeuvred its byzantine insurance infrastructure. Doctors now fear there will not be enough beds or ventilators for the critically ill, nor enough supplies to protect healthcare workers.

“We’ve been telling them for years, ‘Your system is fragile. You need to be ready for this’”, said Albert Williams, Liberia’s minister of health during that country’s unprecedented Ebola outbreak. “But they’re deeply uninterested in international cooperation or advice”.

A frightened population has begun hoarding chloroquine pills following the recommendation of the American president, Donald Trump, who has acted as a kind of “witch doctor”, or traditional healer, during the outbreak. Trump has said he believes the pills may treat the disease. A supposed preventive dose has already killed one man, in the hot, dusty region of Arizona.

Some US government officials have made efforts to encourage or require people to distance themselves from each other—measures which are known to have helped contain or end outbreaks in China, South Korea and Hong Kong—but the US president, Donald Trump, is prioritising the economy over public health, and Americans themselves have largely refused official advice.

Meanwhile, traditional American social practices, as well as entrenched cultural values like individualism, have greatly contributed to the spread of coronavirus, whose carriers can be highly contagious even without showing any symptoms.

Experts say that even young, healthy individuals can contract the disease without their knowledge, putting anyone they come into contact with at risk.

“Before you know you have it, maybe you’ve given it to five people. And who did they give it to? And if they are elderly, you maybe have signed their death warrant”, said Muhammed Abubakar, dean of humanities at National University in Abuja. “This is a sad example of American exceptionalism in its purest form”.

In addition to Americans’ almost magical belief in their immunity to rules of all kinds, the country has faced a serious erosion of trust in official institutions in recent decades.

“These people don’t trust their government,”, said Emmanuel Mawema, professor emeritus of political science at the University of Zimbabwe-Harare. “They still manage to hold what we would technically call elections, but the wider society has been broken for a long time.”

This breakdown in trust has a deep history. Though the country has not experienced violent conflict recently, the United States is wrought with long-standing political divisions between its urban and rural tribes, which have repeatedly renounced efforts to find common ground.

“It’s almost as if they are opposed to the common good on principle”, said Tesfaye Haile, who spent eight years as Ethiopia’s ambassador to the United Kingdom. “This kind of division and the institutional inertia it creates is simply the way of life there”.

Experts say the US is poised to soon look like neighbouring Europe, where cases of the virus have soared in recent weeks, and doctors in some countries are disconnecting life-support services from patients over 65.

“In countries like the US, where life is cheap, it can create painful choices”, said Simon Odhiambo, who directs the Global Human Rights Network, headquartered in Nairobi. “We’ve been saying for years that health is a human right all states must respect, or it can put everyone at risk. This is what we meant”.

Other countries, too, fear the failures of the United States will put their own populations at risk.

“We don’t have any cases right now”, said South Sudanese President Salva Kiir. “We’ve closed the airport and our land borders. This may create real economic hardship for our people, but we won’t allow anyone coming from or through the United States to put our people at risk. It’s a matter of national security”.

CORRECTION: Europe is not a neighbour of the United States. We regret the error.

All the names here are fictitious, unless otherwise indicated (with a link to verifiable, accurate information).