Earth and Rust: The decline of a Kenyan town 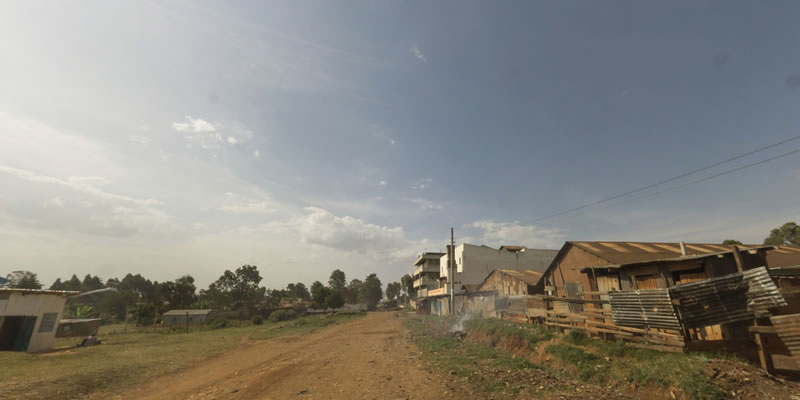 I grew up in Kitale. The story of the deterioration of my hometown in the 1990s mirrored the tumultuous decline of just about every factory-dependent town in the country; it was subtle, gradual, almost imperceptible, and forever disguised as the typical wear and tear of urban spaces – but it was more than that. It was thievery, corruption, and disenfranchisement, shoving it down the path of visible decline; a depreciative spectacle masked by rural docility and the often-accepted rural poverty.

First came the increasing cases of theft. These were often acts of burglary that surprised us in their desperation as much as they exasperated the victims by their sheer banality. We had an outhouse in our compound measuring about 8 feet by 11 feet, where we stored farm equipment, tree seedlings, charcoal sacks – pretty much everything that was bulky and intended for outdoor use. At first the break-ins at this outhouse were infrequent, then they happened about once every few months.

The stories from neighborhood increased. In nearly all the incidences there were no guns used, often no attacks, not even violent break-ins – just missing farm tools, stolen livestock, and pilfered homes when the owners had briefly travelled out of town. Once in late 1996, a neighbour’s clothes were stolen from the hanging line when she went to work, a theft that fascinated the neighborhood to no end. Who would do such a thing? Why – for heaven’s sake? Then there were the stories of food stolen alongside a burning charcoal jiko as someone cooked outside the house, a story told with awkward hilarity.

John Kirimaiti, Wanugu, Wacucu and the elite cadre of fascinating gun-toting gangsters were the stuff of distant cities told with near-legend flair that we knew we’d never have to worry about. Our version of burglary was the smell of despondency with a tinge of crude survival, pain and hunger pangs, which drove able-bodied humans to steal anything they deemed to be of market value.

When we first moved to Kitale in the early 1990s we lived at Section Five, a row of patterned townhouses with hedged compounds of cypress, flowers, worldliness and tranquility. Nearby was Matano, consisting of dozens of two storied homes with large balconies, cream walls and wooden doors named in alphabetical order. Bondeni, where we would go ride the swings at the children’s playground, was not far either.

My folks were somewhat too extraverted for the austere life of hedged picket fences in that neighborhood, so we moved to Section 21, a well tarmacked, more concrete-y neighborhood lying to the west of the town. The streetlights worked, the town matatus ran the transit service with an efficiency that we, for the longest time, took for granted. We moved again just when private landowners started buying property in Section 21 and setting up unplanned developments.

As Section 21 began to sprawl, it is perhaps not a coincidence that the locals transliterated its name to Tuwani (two-one-i), betraying its deterioration, imbuing it with a villagized name, vibe and life.

Our next neighborhood, Mitume, for the better part of the 1990s was a large piece of land with few houses and lot of grassy fields. Mitume (Kiswahili for apostles) a name likely derived from Christ The King Catholic church parish nearby, was far different from the organized suburb life of Section 21, though it offered a stronger sense of community. Mitume wasn’t spared either as slowly, random developments popped up on what was once sprawling grassy fields.

Chipped paint, dirt, and dilapidation slowly ravaged the children play area at the swings at Bondeni estate that we had left behind. The swings grew rusty, then bare-boned and dangerous for kids to play on. Then they got vandalized and whatever remained of them was run into the ground by neglect, swallowed by the earth and rust. Beside it, where dusty paths met collapsing hedges, garbage strewed onto the road from what were once neat, well-ordered homes.

I attended a public school and so did most of our neighbors, and most of our parents were either in the informal sector or worked as civil servants. It’s still intriguing how the elders seemed so unaware of just how vulnerable they were to downward mobility given their faithfulness in following every single news item on the radio. How come they didn’t see what was coming?

Baba Silas, my friend’s dad worked the Kenya Cooperative Creameries (KCC) and so did most of my friend’s dads who worked in various parastatals, like Baba Wycliffe, Baba Jaredi and on and on. Somehow our parents’ names were hallowed, so they were just ‘Baba nani’ and ‘Mama nani’. Baba Silas – I never got to know his name – carried himself with an air of officiousness, always in a leather jacket, with a slow walk; his neck seemed stiff as he walked, with a slight swagger and a polythene bag at hand. He always carried a polythene bag, I’m not sure why.

He’d lose his job during retrenchment as the parastatals got downsized and then collapsed in the mid-1990s. But I didn’t see him for a while, as we moved from Mitume estate to Lessos, where our parents had bought some land. Lessos estate is named after the Lessos farm in Eldoret, given that the Kalenjin owners who gave the place its name had moved to Kitale from Eldoret.

Set on a ridge overlooking a forest, you could always see the factories in Section 6 and Section 19 on the opposite ridge about four kilometres away, across from Lessos forest in the valley below.

From Lessos, the few remaining factories including a leather tanning factory, Kenya Seed, Western Seed and a dozen other factories let out a low dull hum that on a quiet afternoon reached all the way to our home. Slowly by slowly, the hum grew fainter as the firms collapsed until the sound was no more. But quickly, the silence as it was quickly replaced by the cacophony of human activity, especially a construction boom that hit the estate in the 2000s. The town’s population was rising, properties were becoming smaller and more sub-divided, and unplanned developments were everywhere.

As the hum of factories faded to whimpers, informal businesses in the neighborhoods rose sharply as retrenched workers desperately tried their hands in business, trying to secure an income for their families. Most of them collapsed within months or a few years after inception.

The 1997 elections carried with it a strange sense of camaraderie and hope in the town, partly because multi-party politics had expanded the democratic space and increased a sense of political freedom. Men (and they were mostly men) stood atop old Peugeots and Mazdas, flashing two-finger salutes and yelling in the air, drowning the silent scream of a town choking under the stranglehold of Structural Adjustment Programs.

In 1998 my mum sent me to call over a relative who lived about 40 kilometers away for a job opportunity at a local company – this was before cellphones were a thing. I must have been 10 years old. This relative had already unsuccessfully applied for the job dozens of times. I arrived late in the evening as he worked on his shamba, weeding his sukuma wiki and cassava.

‘‘Hii kazi bwana nimeapply, fare nimetumia mingi na mimi nimechoka, wacha tu nilime.’ (I’ve applied for this job many times and used so much fare; I’m tired, let me just farm). I was taken aback by the vulnerability on display, his frustration breaking through into an involuntary rant to a 10-year-old.

This time though, he got the three-month gig, which still only paid peanuts and barely provided him with meaningful cash. He’d leave for Kisumu afterwards, then Eldoret, then Nairobi and back to Kitale then Eldoret again.

I would run into Baba Silas in the late 1990s, a few years after he’d been fired from KCC. He looked haggard, tired, his trouser torn at the knees. He was working at a brick-making factory, and I ran into him taking a break under a makeshift grass thatched shade, eating the mjengo githeri at lunch time. His sagged chin reflected dignity under assault, he looked shaken to see me, and a bit sad.

Then came the early 2000s and the town broke into a palpable air of difficult-to-justify yet hard-to-dismiss optimism. When Narc luminaries came to Kitale stadium for what would be their only visit to the town before the 2002 elections, I sneaked from home to go watch the revolution happen. I was 13 years old.

“Hii movement bwana! It will last for at least 30 years,” my relative would tell me matter-of-factly after the momentous event. His life certainly changed. He landed a better paying gig, then got married. His wedding, albeit later in life than was expected, reflected his changing fortunes, much more than anything. We often take for granted how the frequency of social functions such as weddings, birthday parties, cookouts, and get-togethers reflect a rising society.

He’d secure better fortunes across the country, marry, settle down, buy a plot of land, build his home and essentially hit all the markers of adulthood that had eluded him for most of his life, all in a span of eight years in the 2000s.

Unfortunately for Kitale, the town never got to deftly negotiate with the colonial state in ways that could secure it enough resources to help it fully recover. It didn’t help that the town’s patriarch, Kijana Wamalwa, would pass away a few months into the Narc wave.

Still Kitale continued to grow, the population growing exponentially in the 2000s. During the 2007 post-election violence, given its cosmopolitan makeup, Kitale provided a somewhat safe harbor for those kicked out of their homes in the outlying regions. The population soared but the infrastructure and the vitality of its urban life didn’t. I see all that every time I go home.