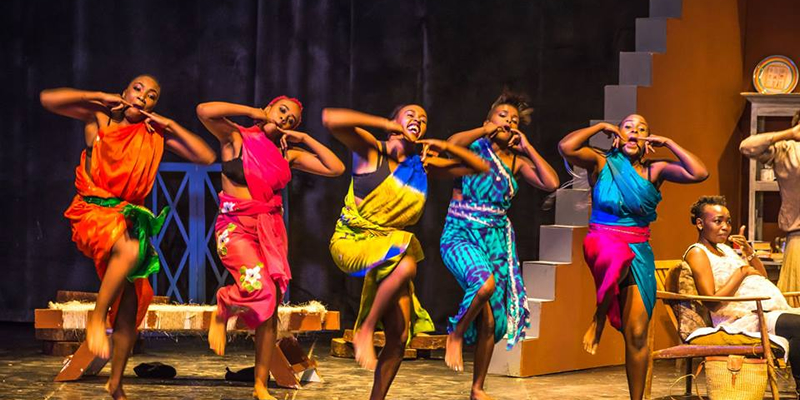 Nina Simone was our take-off. Then Micere Mugo’s poem Where are those songs?’ And then, a contemporary dance performance by GQ Dancers leading to the six linked sketches. These sketches told the lives of women in Kenyan folklore and history, a blend of African traditional and contemporary dance choreographed to urban Kenyan and American music that interposed these narratives.

The stories on stage emphasised the fact that the heroes are also everyday women. Flawed, fragile and still brave. It resists the idea that it takes a special or particular type of woman to change her society.

But in the lead up to this show, and even afterwards, some audience comments posted on Twitter gave me the impression that the audience may have known very little about of the six historical figures depicted in the show, at least not in entirety as presented on stage. Perhaps this has to do with the way Too Early For Birds has established itself for staging performance based on Kenya’s less known histories. In this sense, TEFB –Brazen functioned as a primary, first source of information for many. But this speaks to the absence of public spaces and conversations where these stories would be just as ordinary as the women telling them to us on stage.

Since the show was rated 18, anyone in the audience hearing these stories for their first time was only getting to do so in adulthood. In contrast, the Christmas story and the story Nelson Mandela’s life struggle for South Africa’s liberation, for example, are stories that I’ve known with absolute familiarity, if not specific detail, since childhood. This is in part because these two stories have remained visible and accessible in multiple forms – in writing, in mass media, and in ordinary conversation. They are not stories that I deliberately set out to know. They did not come to me directly prefaced with the term, “This is for you,” and yet in making them as visible as they did, my society implied that these two stories are for me.

It’s not difficult then to imagine that anyone involved in the production of a staged Christmas play, in the Kenyan context, works in a situation where every member of the cast and production team is thoroughly familiar with the story. It is even more difficult to imagine that the performers arrive on stage with responsibility of being the first, primary, and only source of information. Perhaps this gives leeway for the artists to shape and reconfigure their performances to make them suitable for the audiences. Perhaps that’s why, for example, I’ve seen various adaptations of the Christmas story – Christmas in a Kenyan low-income neighbourhood, Christmas in the village, Christmas in a setting that’s as close a replica of Bethlehem as can be achieved in King James English. I return to TEFB Brazen. The artists working on this show did the work of providing enough contextual information so that the stories could be received as relevant and necessary to the audience. I reflect on the choice to include popular contemporary music originally performed by African American women as part of the storytelling. Nina Simone at the beginning of the show evoked a sense of nostalgia for a place I’ve never actually been to and yet a place I know well.

And the familiarity grew as more contemporary songs provided the aural backdrop to the performance – Eve, Rihanna, Beyonce. Based on the reactions that afternoon, this music was widely familiar and recognizable to those who sat in the audience, and echoed the sentiment expressed in pre-show publicity, “This is for you.” It brought us back to the places where we party, connecting with our own memories and inner rebels, from the Beyonces we admire to the Wangus we did not yet know we might admire.

Maybe the music gave us a vision of ‘our’ Kenyan women as being part of a wider community of women in the African diaspora. Maybe this music gave us a vision of our stories as worthy of the same global stage that this music and musicians occupy. Maybe in choosing these songs, claiming these as ‘our mother’s songs’ the writers and actors were gave us space to see our women as just as fabulous, scandalous, fantastic. If there is a standard for brazenness then this music assured us that we have surpassed it.

But it does unsettles me that something from so far away would be the more visibly familiar and most accessible aspect of the show. It unsettles me that the stories of our women heroes are so unfamiliar, so distanced that this music was a necessary intervention in inviting the audience to see these women’s stories as relevant to the present day. Where are those songs? Micere Mugo had asked us, and there they were. Our mothers’ songs?

The stories told in TEFB Brazen are central to Kenya’s social and political history. The actions of all these characters reverberate through our present existence. And yet we have an audience that says, “we’ve never heard this stories”. The storytellers insist that these are ordinary stories. These are stories we should know and own despite the fact that the conditions in this country for artistic production, for publishing and for uncomplicated storytelling remaining are not ideal. For me the most brazen act of all was choosing this sort of work – this writing, this assembling a cast, this making stories come to life, this selling tickets, this loud proclamation, “This is for you!” in a space that’s constantly pushing away these histories.

On Thursday 2nd August, less than a week after the successful run of the TEFB Brazen show, the Daily Nation featured a eulogy of a former Assistant Police Commissioner who’d just recently died. The photograph used on the page showed him standing next to Ms Chelagat Mutai. Though her name was correctly spelled in the caption, the written tribute did not offer an explanation for why she had been in the picture. Here she was just a backdrop in this person’s life story. But I knew, when I saw her image. Thanks in part to TEFB Brazen, all I saw was her – Ms Chelagat Mutai, standing there, holding her purse, unafraid.