Winnie and Wambui, a Tribute to Sisters in the Struggle 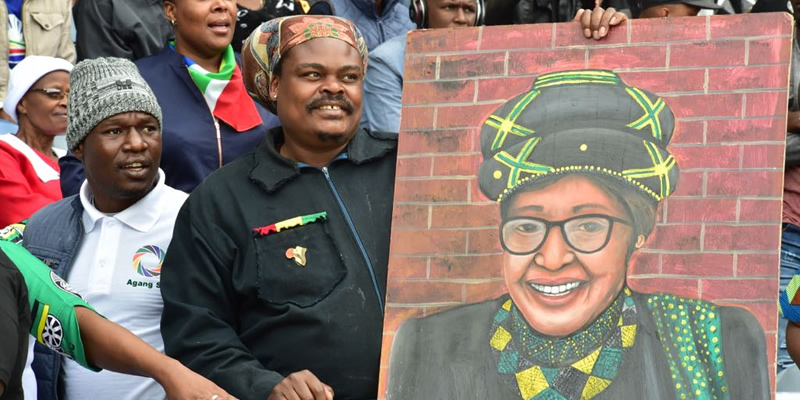 Several years ago, I played host at the Nyungu Cultural Club Personalities evening to Wambui Otieno. The public’s enthusiasm to attend this event was several notches higher than the usual, as Wambui Otieno was a well-known figure. Many were eager to meet, see and hear her, but my suspicions were that her powerful appeal was not because she was a former liberation Mau-Mau combatant, a detainee, a sexual assault survivor and a vocal non-compromising anti-establishment politician. Wambui had been made a household name by the legal battle she waged with her in-laws and their clan, Umira Kager over the right to bury her husband a well-known criminal lawyer S.M.Otieno. To many people therefore, Wambui Otieno was the widow of S.M. Otieno who fought over his body and lost. Her claim to fame or notoriety was that she dared challenge the traditions and culture that denied a woman this most fundamental right. To some people, she epitomized the perennial battle between her Kikuyu people and her Luo in-laws.

I reflected on this event while simmering with rage from reading article after article supposedly written as tributes and obituaries to the departed Winnie Madikizela Mandela. In practically all these articles, Winnie Madikizela Mandela’s stature was diminished by hyphenating or pre-fixing her heroic accomplishments; she was: a ‘female-icon, woman-fighter, women-leader, flawed-hero, a controversial symbol, the former-wife, divorced-wife, a strong headed woman. She was in all these accounts just half of what she was, never a full thing. She was an almost-thing never an accomplished and successful human being, woman, mother, fighter, MP, government-critic, feminist. Deeds that qualified her as the enigma she was, had to be tempered by a negation. It is obvious that the world is uncomfortable, even in death, with women like Winnie Madikizela or Wambui Otieno.

Wambui, just a few months older than Winnie. Wambui was born on June 21st and Winnie on September, 26th 1936. It must have been a good year. Unlike Wambui who willfully thrust herself into the liberation war running away from home to join the fighters, Winnie married into the struggle. However, her marriage to a free Nelson was short lived and she found herself in the deep end of the freedom struggle and in and out of jail. She, like Wambui was arrested, detained, tortured and humiliated. In the case of Wambui she was subjected to sexual abuse and maliciously impregnated by a white man with the demonic belief that this would goad her Mau Mau compatriots to declare her a traitor and kill her. Sex has been weaponized from time immemorial. Winnie steadfastly fought for her husband’s release from prison every one of the 27 years he stayed incarcerated just like Wambui fought for her husband’s body.

Both the battles of Winnie and Wambui draw parallels between patriarchy and the nihilistic apartheid regime, both women suffered abuse to their persons as women. Winnie, though she was not raped, was kept in confinement and denied the most basic and human rights necessities like sanitary towels to manage her menstruation in order to humiliate her as a woman. She was physically and psychologically tortured in an attempt to break her spirit. She went through immense humiliation but every time she emerged from prison she would thrust her fist into the air in defiance just like Wambui did when the court finally decided that she had no right to bury her husband and father of her children. She boycotted the burial in Nyalgunga, Siaya metaphorically giving Umira Kager the ‘finger’.

These are acts of unqualified heroism – to challenge a murderous system like apartheid, to challenge colonialism, to unflinchingly battle against humiliation because of ones gender and to remain strong when your husband is eventually snatched from you. Yes, because Nelson was snatched from Winnie by the collusion of multiple oligarchies. The notion that Winnie should have stayed celibate and not accede to human need for companionship is a conspiracy against women. How long would any man have stayed single with their partner locked up? The ANC snatched Nelson from Winnie on the basis that she was a liability and embarrassment because of the accusations arising from the Stompie affair. This is even as Winnie herself denied the charges and proclaimed her innocence, even with evidence of the collusion of the South African police in framing her she was ignored by ANC. The ANC preferred to listen to her accusers rather than to Winnie probably because she was a woman.

Wambui Otieno spoke about being dismissed and unbelieved about being raped and getting impregnated by the colonial police. Winnie was vilified for comments she made that were taken out of context about the liberation needing to resort to matchsticks, petrol and tyres yet those Umkhonto we Sizwe fighters who set up bombs were never castigated. Later she was arraigned in court on charges of fraud and abuse of office in a manner that smacks of an orchestrated witch-hunt. In fact, the recent revelations of what people like ex-president Jacob Zuma did make her ‘crimes’ pale in comparison. The only reason all this was allowed to go on was because Winnie was a woman doing a man’s things. This is probably why her achievements has to be negated by the prefixes.

The struggle against imperialist forces, especially in Africa, negates the involvement and participation of women, leading to the discussion of female acts of heroism being negated. In countries where an armed struggle was waged there is a systematic negation of the participation of women. The text is the same with Joice Mujuru in Zimbabwe, Mrs. Patrice Lumumba – who was paraded stark naked on the streets as she mourned her murdered husband, Josina Muthemba Machel (who married Samora Machel), Funmilayo Ransome Kuti (Fela Kuti’s mother) a thorn in the flesh of the colonialists in Nigeria and the post-independence Nigerian government. In Kenya there are no monuments for Priscilla Ingasiani Abwao the only woman delegate to the Lancaster House conference or Muthoni Likimani, Jael Mbogo and many others. The denigration of Winnie was deliberate to maintain the saint-like status of Nelson Mandela- though he really did not need that.

The prevailing narrative is that which lionizes the contribution of men and denigrates the participation of women. The cheapest way of demeaning a woman is sexual abuse, whether actual and physical like in Wambui’s rape case, or by highlighting supposed cases of sexual impropriety in the case of Winnie. When a woman is reduced to a sexual object within a normative ethical context that demonizes a woman’s sexual ‘infractions’ while glossing over the man’s, the battle is lost even before it begins. However, unlike the past where such orchestrations went without challenge we have seen a spirited battle to re-assert the place these female icons held. There is a counter-narrative that is taking shape thanks to the access of social media that is not controlled by the establishment apologists. The role of those still in the trenches fighting to retell the story of our past, and current liberation struggle against post-colonial and patriarchal cultural hegemony is to de-prefix and de-hyphenate the recognition of the real heroes of the struggles.

As Winnie is laid to rest on April 14th we should not hear any negative qualification to her heroic leadership and commitment to the cause of the Blacks in South Africa and beyond.