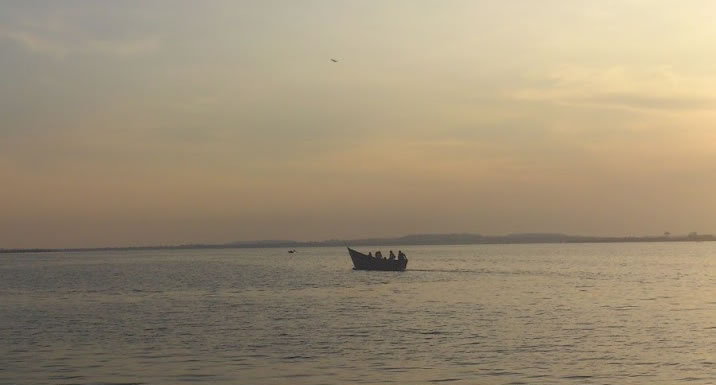 Listen
Our fishermen have always netted fish,
strange bodies,
and even stranger stories.
Stories of seductive mermaids and Mami Wata;
The terrifying Mokele-Mbembe,
and the Lochness Monster

With a Messiah
they caught all types of men,
and transformed the world to now say Amen
They also caught Nyamgondho’s wife…
the not-so-beautiful woman,
who transformed a not-so-wise fisherman’s life.
From the shores of the sea
they beheld the sign — Ichtus
and discovered the lyre of that great charmer;
That ‘fisher of men’– Orpheus.

Look
As he rows his old Ssese canoe,
the fisherman tells a stranger water story
With quivering lips, and aching hips,
he tells of those who drowned on the land, and were buried in the water;
of those who tread the storied waters, and live in dread
of those who count the dead whose names remain unsaid

With hands trembling and hope crumbling,
he shows the baton that struck his daughter’s skull,
The same batons and bullets that turn fishermen into strange fishers-of-men
Look he says…when the fisherman dies, his baby cries,
when the baby dies, the mother cries…

With trembling hands and a bleeding heart
He cast his net and hauled in a strange catch
A heavy bag that carries the truth of the land
In whose recesses, lie the excesses of the land
A bag denied the man with a sacred hand
The man and the girl, who still haunt the land

As he hauls a catch too heavy for his net to bear,
he mourns for souls that are too heavy to care
for souls that stare and dare to cheer
at the fisherman’s ire, and his perpetual fear

At the scared fishermen who remember how they cared,
for the floating dead of April 94, Rwanda
As they fished out men and omena from afar,
His scarred hands tremble and he mourns for the land
that cheers as it slowly turns into 1994

With misery and memories of Kagera’s deliveries,
He reflects with sorrow on today’s mysteries
In these familiar waters, he has fished and wished
In these strange waters, he has seen Fish-Men and bad omens
with a heavy heart , he beholds these heavy waters
that refuse to dissolve, the unresolved truths of the land

Clear waters that reflect the dictates of the land
bloodied waters when the state mutates and hate becomes our mandate
bloodied streets when killers of men, and counters of men,
turn fishermen, into fishers – of – men

So he mourns and protests and even meditates,
how the heavy hand turns ‘business men’ into killers of men
and fishermen into fishers-of-men
How it turns widowed daughters into witnesses by the shore
Who wait to see what the net will bring forth
For they know and hear every fisherman’s woes

He fishes and wishes …
That his dear lover and worried wife,
for all the uncertainty and sorrow of this life
will not tomorrow receive him as a fished-man
All bagged and netted by these part-time fishers-of-men

He knows that once you see life as hollow
With or without skill, you will learn
With even a mere stone, or an Ass’s jawbone
to strip your catch to the bone

Once you follow;
You will catch the beautiful fish
You will stroke her rounded belly,
You will choke it by the gills;
scale it with a knife;
running all the way from its tail to its head
You will hang it on a hook;
weigh it, and then dry it

Once you follow;
You will smoke it;
salt it, and gut it;
First by sliding your knife into its anus
and then slowly through its abdomen, all the way to its head;

Once you follow;
With a sweating face, and a smile that lingers
you will part her abdomen with your bloody fingers;
You will pour out the roe…and call her a whore…
You will cut her family line,
as you pull out her filth-filled intestines

You…
yes you, with a smile
once you learn how to follow
you will rinse the empty cavity
and then…slit its sides;
and behold the rawness
and the freshness of its flesh
You will rub in the salt to keep its flesh fresh
And you will smile as it writhes in pain
For it is now almost ‘your time to eat’

He knows that once you follow
once you trivialize the human cry;
once you disregard the call of the fishers-of-men
who know one day they themselves might be fished-men
Then, ‘we’ all become potential fished-men

He hopes that you, once you apprehend his face,
you might want to pause and ask;
what kind of hunger , what kind of anger
makes one man turn his brother into a fisher-of-men?

What sense of duty, what banal evil, what kind of upheaval,
makes it so easy for the long armed man to haul the body into a body-bag?
To cast the dead into the lake, to hide them…for ‘our’ sake
to try to dissolve them or to erase them

Then listen to the fisherman’s cry,he would prefer not to be
a fisher-of-men, a fished-man

Doubt
As you listen to the fisherman’s story,
Will you put your fingers into their bullet wounds…all you who doubt?
Yes, he is a mere story-man, an everyman…
He probably does not know by name, those who they hauled in their nets
You doubt that these mere fishermen can tell one body apart from another
That these fish-men know the difference between the fish’s body and the human body

As he listens to your stories, he asks that you listen
otherwise …
All you who say that they are mere fishermen
Net-casters and stone throwers
You doubters who say;

He asks that for one minute, you listen to yourselves!!
And then…imagine;
the horror of men and women who mourn when they haul in a human being
in nets meant for other beings
The horror of men and women who can tell apart the many species of fish;
kamongo and mumi,
omena and fulu,
ngege and mbuta…
and now have to haul in a strange catch; One that tells them that they as fishermen,
They as fishers-of-men, are a lesser species of men

The sorrow of this man
Of Men and women who know that this water body
is full of dead bodies. Full of spirits of the dead… Nyawawa
Spirits who are repelled by noise
Spirits who have gone silent
For they have now been joined by their wailing kin

Listen and run, he says…

Run…
For they no longer trust the truth-tellers
Or anyone who takes blood samples
Collects forms and brushes bullet cartridges
in order to tell them what they already know…
To tell them that they can’t determine what everybody knows
To tell them that the bodies in the bags drowned themselves
Just like they were told in 1990
that one could shoot themselves in the head;
pour acid on their body; and then set themselves ablaze…
in that order

He no longer believes these expert truth-games
These experts who tell him that there is no need to know otherwise
That we cannot play other games. That we cannot live with others
…otherwise

He remembers his childhood.
A different time and a different rhythm
He remembers the child he has just lost…
The pain makes him tremble.
He remembers a childhood game…
One he didn’t like much …
The song haunts him…he plays with the idea

He has told you his story.
The fisherman’s story. The story of fishers-of-men

So we wait
We interrogate
Not all truths
Just the fishermen’s truth,
For our truth-games tell us that these fish-men are strange beings
That these strange fish-men have been weighed and found wanting
That these men who are not really men
do not count for much
That they are not worth listening to…

Are you afraid that if you listen otherwise you might learn something?
About yourself
About an other
About us
About…
Love
Just love

We are all potentially predators and prey;
like Mbuta, that foreign big fish
we can create Darwin’s nightmares in our families,
In our familiar waters
That we, small fish, are a diverse ecosystem
Are not only part of this system, but can be apart from it

The streets are burning, bloodied, so he immerses himself in the water.
Holds his breath…
A new baptism , he has done it all his life
But today the water is heavy, tepid, 37 degrees…painful

He invites you too, immerse yourself …
Not only in the water, but in the pain of the other,
Maybe the scales might fall off your eyes
So that we may see and listen to ourselves
That you may listen to these fishermen…
Amphibious men of land and water,
Men who know that we are all potentially fish;
healthy…delicious
beautiful…Rotten!!

Listen to these fish trappers
Men who have been trapped by other men
And are slowly being turned into man-trappers
Listen to men who know the difference between a hook and a net;
Not because they use it, but because it is wrapped around their neck
Men whose wounds warn us,
that when the net is cast far and wide
when the pond dries up, we will all be fish…
we will all be an accompaniment to bread
To ugali,
like nyama choma
But it will be someone else’s ‘turn to eat’

Listen to the fished-man’s cry
For it is not our names that betray us
It our fishiness, our bodies
Our body bags
Our state
Our state of mind
That is what betrays us
That is what preys on us

He is listening; looking; mourning; imagining; listening otherwise; swallowing his pride…he is trying to feel otherwise…trying to be otherwise.

But as he treads these bloody waters , it is made clear
that here,
some lives are no longer dear…
So he waits…

And hopes that…
As ‘we’ wait for the ‘next day of judgment’
As new batons hit new skulls
As more bullets pierce more flesh
As fish-men, those fish eating men run on the streets…

Do not only listen to the gunshots and business reports,
Listen to the fishermen’s lament,
Its specificity,
It can be your lament too
Maybe not today
Maybe not tomorrow…
Maybe it was yours yesterday
Maybe it will never be your cry
With empathy, listen nonetheless…