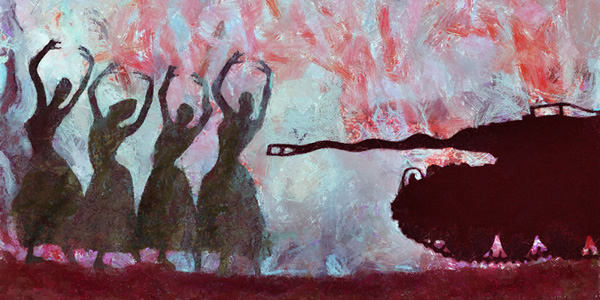 Today, I will be a peace ambassador for Kenya. However, to get to this peace, you must first endure this wading through the rot of a national wound too long in suppuration. No shortcuts. It’s real peace you want, isn’t it? Let’s get to it then.

The rot is not with the people; it’s systemic. It is solidly institutionalized so that anyone who gains access to power can choose to use it. The Kenyan power system is like a kitchen with a sewage system that spews out its filth into the pipes that are controlled by politicians so that the food cooked in it poisons all its consumers.

The rot is a glut of selfishness, insatiable greed, impunity and a deep dark fear that there will never be enough for everyone. It suppresses human kindness and makes for a perfect mushrooming of endless schemes against the weaker person.

The rot is not erased by footprints of bold infrastructure that earn us the middle-income country label, because right beneath all the brick and mortar are mounds of humanity wiggling like maggots on a carcass of poverty.

The rot is resilient, stamped into the country’s fractured birthing, and spews out constantly to poison and deny millions peace of mind. In the past few days, this rot broke its banks, and time will tell how many victims will drown before the flood is contained.

No matter how piously you pray, nothing will change until you act, and you will always suffer the effects of the rot, regardless of what ethnicity or social class you belong to. Some are staggering in drunken celebration for your candidate’s declared victory, yet you retire to this rot that welcomes you every night with its empty stench. Silently, you cry your tears of destitution and wait for tomorrow when you can vomit the poison in your heart onto another’s shoes. Perchance, that should give you some twisted relieve.

Some are calling for peace because you’ve got fortunes to protects, comforts you worked very hard for. But you know as long as your fortunes can shift in a second, as long as you’re easily the victim of robbery, carjacking and hospital strikes, as long as you feel you have to hide your houses behind prison-like barricades, as long as you pretend not to see the multitudes that stream in and out of neighboring slums daily, as long as you know an elections official and an innocent Kenyan got slaughtered in cold blood just before you voted and you don’t care, you’re infected by the rot.

I beg that you do not insult my intelligence by telling me that the “peace” I see so many struggling Kenyans waking up to is worth thanking God for. It is not peace; it is prolonged inner turmoil, a constant state of need, a place of squalid agitation, a position of indignity and beggartude, a condition of powerlessness, all of it too often bandaged with the balm of Kenyan humor and the opium of religiosity.

In order to get to peace, we must change this rotten system, and we can do it in three ways:

1) Accepting the results that a rotten system spews out and hope that we will forget the injustice;

2) Use the institutional tools available – courts, civil society and movements – to change the system;

In 1861, a divided America chose #3, a bloody war which ended that country’s rotten system of slavery from which many benefited. After the war, a new united nation emerged. It cost them over 600,000 lives.

Kenya cannot choose this option, not because it cannot afford the blood sacrifice, but because it may not survive the aftermath. Not without the kind of leader who will inspire a million Kenyans to take up that valiant “give me freedom or give me death” option. Many a powerful and prosperous nation have been founded on #3. I mention this NOT to justify war but as an objective observation of history.

Kenya should not choose #3 unless it can identify a leader who can steer a country from a bloodbath and onto a new united identity. The US had Abraham Lincoln. Rwanda discovered Paul Kagame after a slaughter that cost the country over 800,000 lives. Both leaders shaped a better nation in the aftermath of conflict that forced them to deal with the depths of their national decay.

Kenya should not choose #3 until it has exhausted all diplomatic and nonviolent options, and because we’re a wiser and smarter world that knows the cost of war is too great. It is practically impossible to exhaust diplomatic options as long as we’re willing to do the hard work. But diplomacy must never again be compromises that simply sooth the egos of political opponents in power-sharing deals that ignore the gaping national wound of forgotten injustices.

In 2007 and 2013, Kenya chose #1, and it must not become the case again. It’s the wrong choice. It only allows the rot to increase and provides the next power center with a decayed system with which to poison their opponents. There is nothing smart about accept-and-move-on; it’s only fear and suppression of justified anger.

That leaves #2, which is the best option. Kenya still has a capacity for powerful movements, a history of people-driven transformations. The Second Liberation that ended the era of dictatorship, the Orange movement that ushered in a new constitution. We need a revolution with twice the combined potency of those two movements. A Velvet Revolution solution is what is needed to rid the country of its institutionalized gangrene. No, Kenyans, revolution is NOT a dirty word. It’s a dance against systemic rot and brutality. It might cost you life and limb. After the dance comes peace.

This article was originally posted here
Photo credit: “Dancers and the Dictator”, by Wissam Al Jazairy