Without Political Reforms Rwandans Will Continue to Seek Refuge Abroad 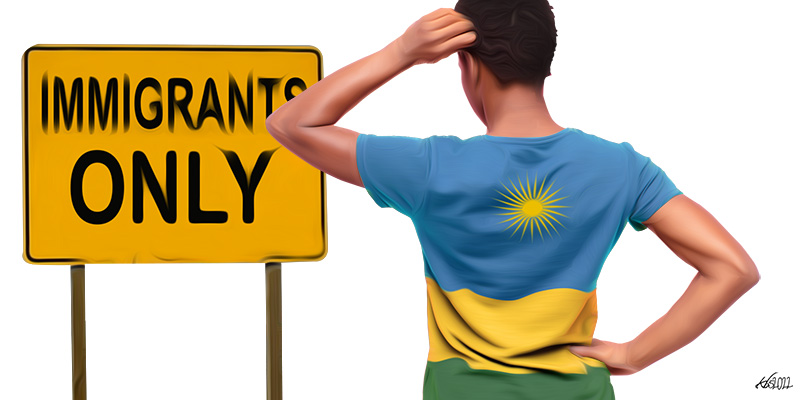 Rwanda, a country to which the UK plans to deport asylum seekers, has been producing refugees since its independence on the 1st of July 1962. Successive regimes have used any and all means to stay in power, refusing to implement governance reforms and causing the country to experience cycles of violence that have led Rwandans to seek refuge in other countries.

Already, the independence of Rwanda was preceded by a revolution in 1959 that forced Rwandans into exile.

The first ever ruling party to lead Rwanda, the Party for Hutu Emancipation (MDR-Parmehutu) gradually transformed the multi-party political system into a single party system. It made no attempt to address the social grievances engendered by the 1959 revolution and nor did it engage directly with those Rwandans who had fled Rwanda during the revolution to agree on their safe and voluntary return to their motherland.

In 1973, the then President of Rwanda Grégoire Kayibanda was overthrown through a coup d’état that created a new wave of Rwandan exiles.  The new ruling party, the National Revolutionary Movement for Development (MRND), enacted laws effectively making Rwanda a single-party state and replaced the 1st of July independence celebrations with the 5th of July celebrations of the MRND coming into power. The MRND was in power for over two decades, with its chairman, Juvénal Habyarimana, the sole presidential candidate, consecutively winning elections with close to 100 per cent of the vote. While Habyarimana was commended for his economic achievements, maintaining order and security in Rwanda and good relations with regional states, he was criticised for human rights violations and lack of democracy.

As with its predecessor, the MRND government did not address the social grievances of those who fled Rwanda during the 1959 revolution and following the 1973 coup d’état, grievances which were also shared by Rwandans inside the country, including the families and friends of those who fled and other dissenting voices inside Rwanda. While it was clear that there was an urgent need to implement reforms in governance, the ruling MRND was slow to act, and when it did, it was too late.

The single party system was replaced by a multiparty system in 1990 but in the same year the Rwandan Patriotic Front (RPF) launched an attack on Rwanda. The RPF was mainly composed of the descendants of Rwandans who had fled the country in the wake of the 1959 revolution. Negotiations between the MRND, various political parties and the RPF, were agreed in 1993. However, in 1994, Habyarimana was assassinated, and the civil war resumed that culminated in the genocide against the Tutsi.

The RPF went on to win the battle and take power in 1994. Although the majority of Rwandans who had fled Rwanda during the 1959 revolution returned, the civil war and the genocide led to a new exodus of thousands of Rwandans into exile.

The RPF implemented a consensus democracy that aimed to prevent further ethnic violence while accelerating development. Although this political system was supposedly a multi-party system, it has transformed over time into a single party system that suppresses political dissent, restricts pluralism and curbs civil liberties.

Similar to its predecessor, the current regime does not celebrate Rwanda’s independence day on the 1st July of each year but rather the 4th July, the day it won the battle and took over power. Rwanda’s President Paul Kagame has ruled the country for over two decades, winning elections with close to 100 per cent of the vote. Rwanda has once more been praised for its economic achievements and maintaining order and stability within its territory but has again been criticised for its human rights violations and lack of inclusiveness in political processes.

There is, however, a difference in how the RPF has opted to solve the Rwandan refugee problem.

The RPF’s security policy is premised on the strategy that any threat, real or perceived, is pre-empted beyond Rwanda’s borders since Rwanda is a small and densely populated country, and consequently, has no space for war within her territory.

It is in that perspective the Rwandan army invaded the Democratic Republic of Congo (DRC), its neighbouring state to the east, in the late 1990s with the aim of fighting the remaining Rwandan forces that had sought refuge in the DRC after the civil war and the 1994 genocide. The United Nations has reported that thousands of Rwandan refugees and Congolese nationals were killed in the process while thousands of Rwandan refugees were returned by force to their motherland.

The RPF’s security policy is premised on the strategy that any threat, real or perceived, is pre-empted beyond Rwanda’s borders

There are compelling reasons why Rwandan refugees do not return while others continue to leave the country to seek refuge abroad. The devastating memories of the civil war, the genocide and the refugees killed in the forests of the Congo are still fresh in the minds of Rwandan refugees and, in the absence of a comprehensive reconciliation policy in Rwanda, they are unlikely to return. Moreover, persistent and widespread poverty and inequalities are forcing more Rwandans to leave the county and discouraging the return of refugees. And despite the international community recognising the economic achievements made by all regimes that have led Rwanda, 60 years after independence, Rwanda remains classified among the least developed and 25 poorest and most vulnerable countries in the world.

Political persecution and human rights violations are also rife in Rwanda and these deter Rwandan refugees from returning home while inciting those in the country to leave. Anyone who dares or is perceived to challenge the government’s policies and narratives is persecuted and labelled an “enemy of the state intending to destabilise Rwanda”.

In 2010, I was convicted on fabricated charges, including denying genocide, and sentenced to 15 years imprisonment for daring to question the government’s policies. My appeal to the African Court of Human and Peoples’ Rights cleared me and I was released in 2018 through a presidential pardon after eight years in prison, five of which I spent in solitary confinement.

My story, and those of others who have gone and continue to go through similar experiences or worse for challenging the government, are testament that Rwanda is yet to embrace democratic values including respect for human rights and the rule of law.

Since its independence, successive regimes in Rwanda have been built around a strong man rather than strong institutions while external powers turn a blind eye to their repression and persistently provide political and diplomatic support. The result is that state institutions have been weakened, human rights and democratic values have been infringed upon and the problem of Rwandan refugees has remained unresolved, causing instability in Rwanda and providing a source of political tension in the African Great Lakes region.

Persistent and widespread poverty and inequalities are forcing more Rwandans to leave the county and discouraging the return of refugees.

Over the past two decades since the RPF took the power, Rwanda has been in political tensions with almost all its neighbouring states, accusing them of hosting Rwandan refugees who want to topple its current leadership by force.

Continuing in that direction means that Rwandan refugees abroad and Rwandans inside the country (half of whom are today aged between 15 and 44 years old and were minors or not yet born when the civil war and the genocide took place, and whose civil liberties are infringed upon through the various restrictions imposed by a regime that claims that its aim is to prevent the breakout of another ethnic conflict and to accelerate development) will eventually take the situation into their hands and fight for their rights in the same way the RPF did in 1990, with the risk of taking Rwanda back into its dark past and creating another exodus of Rwandans into exile.

But it must not be that way. Both Rwanda and friends of Rwanda must not let history repeat itself but must instead strive to create a better history for Rwanda that can inspire future generations to work together in harmony towards the development of their country while peacefully contributing to that of the region.

That is why governance reforms in Rwanda are a prerequisite to preventing history repeating itself in Rwanda and to putting an end to the tensions in the African Great Lakes region. Reforms can concretely be realised through an intra-Rwandan dialogue between the government, the opposition and civil society organisations based inside and outside Rwanda, especially those made up of Rwandan refugees. This inclusive dialogue would agree on and create an environment that would enable the safe and voluntary return of Rwandan refugees and facilitate long-term stability in Rwanda and in the African Great Lakes region. Dialogue as a means of finding a lasting solution to state problems is one of the fundamental principles of the constitution of Rwanda and it is aligned with the United Nations Strategy for peace consolidation, conflict resolution and prevention in the Great Lakes region adopted in 2020.