Sri Lankan Uprising Is a Cry for Regaining Democracy 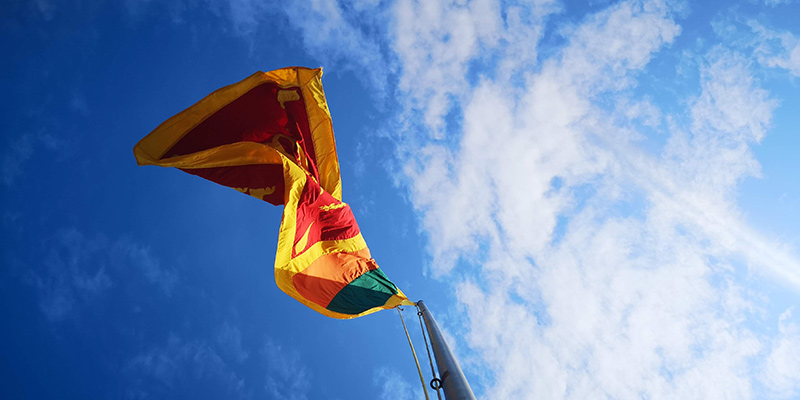 There are some familiar and tired tropes that have long characterised South Asian politics. Some of these are the rise of populist demagogues, authoritarian rule, the breakdown of the rule of law, militarisation, and ethnonationalist and religious conflicts. Much of this has been true of Sri Lanka’s seven-plus decades of post-independence history. The country has seen a 30-year militant conflict fuelled by majoritarian ethnonationalism, two bloodily suppressed Maoist youth uprisings, and increasing religious tensions.

Indeed, the last decade after the conclusion of the war in 2009 has been one of rising ethnic and religious polarisation alongside a growing gap between an affluent urban minority, used to a culture of conspicuous consumption, and a large majority of the population struggling to maintain a decent standard of life.

It was over this highly iniquitous society that the extended Rajapaksa family – led by the charismatic demagogue Mahinda Rajapaksa – built what appeared to be an unshakable political dynasty. But on Saturday, July 9, the Rajapaksa project came to a staggering halt amidst a spectacular people’s uprising, never-before witnessed in Sri Lanka and anywhere in South Asia.

The people’s uprising had a singular goal of forcing the incumbent president, Gotabaya Rajapaksa (or Gota), Mahinda’s younger sibling, to resign along with his government.

Gotabaya, elected to power in 2019 with an overwhelming majority, further consolidated by a sweeping electoral win by his party the SLPP (Sri Lanka Podu Jana Peramuna) in 2020, failed to deliver on the vistas of prosperity that his election manifesto promised.

Instead, with faltering income from tourism due to the 2019 Easter Sunday attacks – which those campaigning for Gotabhya weaponised into an anti-Islamic discourse that shored up majoritarian Sinhala Buddhist sentiment and projected Gota as a national saviour – and mismanagement of the economy along with drastic tax cuts benefiting the wealthy and a disastrous overnight attempt to switch to organic farming, Gotabhaya’s political stock had all but expired.

By July 9 there was virtually no fuel in the country, public transport had ground to a standstill and on the evening before, the chief of police declared an illegal ‘police curfew’ in a desperate attempt to discourage protestors.

Despite these many obstacles, from early Saturday morning, people began streaming into the capital Colombo from all parts of the country. Thousands thronged railway stations and forced officials to operate trains. Others walked, cycled, rode on lorries, or scrambled aboard trucks usually used to transport sand. By mid-day hundreds of thousands had gathered in the vicinity of the Presidential Secretariat in the heart of Colombo’s business district – a site which had seen a three-month long ‘occupy’ movement and an encampment named the ‘Gota Go Gama’ (Gota go home village).

Following pitched street battles between the protesters and the police and armed forces, in which protesters were beaten up and multiple rounds of teargas fired, the Presidential Secretariat, the President’s official residence and the Prime Minister’s office and residence were literally and symbolically ‘taken’ over by the people.t appeared that the security forces realising the overwhelming strength of the protesters simply gave up. There were ecstatic scenes as people swarmed the Presidential Palace and office with some even jumping into the swimming pool and images and video footage of the triumph circulating widely on social media – a medium that played a vital role in mobilising and sustaining the protest movement called aragalaya (struggle) in Sinhala.

Throughout the ‘occupy’ movement the Rajapaksa regime and its national security apparatus underestimated the will of the people repeatedly. It all began on March 31 when thousands thronged the President’s personal home in the suburbs of Colombo demanding solutions to power cuts that extended up to 10 hours a day, shortages of fuel and cooking gas, and skyrocketing food prices due to runaway inflation.

Jolted by this sudden uprising the regime responded with overwhelming force – beating up protesters and excessively using teargas followed by mass arrests. But this repression resulted in the establishment of ‘Gota go Gama’ and a nation-wide protest campaign with mini protest sites mushrooming in many towns across the country.

A similar scenario occurred on May 9 when government-backed ‘thugs’ attacked the Gota go Gama site but were unprepared for the instant national backlash with houses of government politicians being torched – ultimately resulting in the resignation of premier Mahinda Rajapaksa.From this point onwards it appeared that the aragalaya was fizzling out, with the appointment of Ranil Wickramasinghe as prime minister – a man with long political experience – who moved swiftly to undermine the protesters by attempting to restore fuel and other supplies.

However, the ‘economic rationality’ of the political elite failed as was evident on July 9. While it was undoubtedly extreme economic deprivation that brought people to the streets, there was and is a clear demand for political change.

While some commentators have mischaracterised July 9 as a form of “mob action”, there is a distinct democratic core to the people’s struggle.

Political change in Sri Lanka since 1948 has been through elections where patron-client relationships established by the political elite have often played a key role. Politicians have long wielded a stranglehold on access to key resources. Whether you are a businessman seeking government contracts or a poor farmer looking for subsidized fertiliser, the political class controlled access. The Rajapaksa regime expanded and entrenched this patron-client system as never before and used a toxic glue of racism and religious enmity to bind the Sinhala majority to their political will.

Following the defeat of the Liberation Tigers of Tamil Elam (LTTE), the violent militant group that claimed to represent minority Tamil interests, the Rajapaksa’s positioned themselves as saviours of the nation and aligned with a crony-capitalist class and a highly militarised form of governance swiftly moved to build an ethnocratic national security state – cheered on by a triumphalist Sinhala majority high on the military victory and an unsustainable post-war economic boom propelled by heavy government borrowing in international financial markets.

There was a temporary respite when Mahinda was ousted from 2015 to 2019. But with the election of Gotabhaya in 2019, it seemed the Rajapaksas had regained control until the events described above.

The aragalaya can be identified as a democratic movement due to a number of reasons. It broke the vicious cycle of patron-client politics. People marched to Colombo not because of the promise of a monetary handout, some liquor and food – the usual package doled out by political parties to attract supporters to rallies. It was largely a youth-led movement which was able to speak across ethnic, racial and class divides. It also utilised art and culture in creative ways not witnessed in Sri Lankan politics before.

The aragalaya also spoke to issues of economic and social justice, including Sri Lanka’s long history of human rights abuses and impunity, which have long been pushed to the margins. However, the aragalaya movement was not homogenous, unified and nor did it have a distinct core leadership. It is this very formlessness of the movement that allowed so many groups – ranging from student unions, political party affiliated groups, trade unions, civil society activists, artists and youth – to gather under the aragalaya banner.

But this also meant that many unresolved contradictions remained throughout the struggle and the specter of a common enemy unified this diverse group.

Now that the enemy is gone, or very close to going, some of those divisions are re-emerging. Some groups associated with the aragalaya are celebrating Field Marshall Sarath Fonseka, a highly divisive figure accused of war crimes during the 2009 conclusion of the war and other groups are calling for a complete overhaul of the state without considering the constitutional implications of such a radical and democratically unsanctioned restructuring of the state.

The current moment in Sri Lanka is what Antonio Gramsci might call an “interregnum” where the “old is dying and the new is yet to be born”. It is a volatile and fluid situation and the future of Sri Lanka’s politics and society are by no means guaranteed.

But the aragalaya did establish one powerful idea – that despite seemingly overwhelming odds the people’s will can prevail. At the very basic level, this is democracy in action. There is a fundamental distinction to be made between the mob that invaded Capitol Hill in 2021 seeking to preserve the Trump presidency and the nationwide mobilisation that led to the ousting of President Gotabhaya Rajapaksa. One sought to undermine democracy while the other sought to regain the promise of democratic politics.