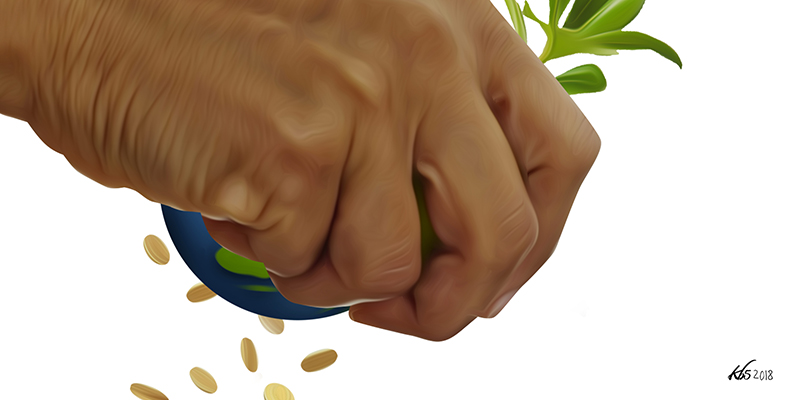 Good evening comrades and colleagues! We thank everyone for coming together in this meeting of hearts and minds of those deeply committed in the global struggle for climate justice.

As we approach the crucial climate talks, and to cue our discussion on what are the non-negotiables of the exploited, dispossessed and oppressed peoples of the Global South, I will lay down four red lines that hopefully capture the dividing lines we have drawn up between the common future we want, and what the UN Special Rapporteur Professor Phillip Alston calls an emerging ‘Climate Apartheid.’

First, we must assert that People and Planet must be put first over Profit. COP 26, like all global intergovernmental gatherings, is an agora dominated by the powerful advanced capitalist countries and corporate lobbies. Yesterday, news broke of a massive document leak revealing countries like Saudi Arabia, Japan, and Australia lobbying the Intergovernmental Panel on Climate Change (IPCC) to water down recommendations for carbon cuts and climate finance in their authoritative scientific reports.

It is not surprising that these powerful interests are trying to dominate the climate talks, and consequently marginalize the already marginalized voices of the most climate vulnerable peoples and communities in the most vulnerable nations of the world. Indeed, COP26 reflects the realities that we are in a global economic and political system of imperialism that cannot refrain from plundering the world’s natural resources and exploiting the people’s labor or else it will collapse.

The silencing of grassroots voices in the talks is just the tip of the iceberg of impunity we face as we struggle to demand climate justice. Down in the frontlines, many environmental defenders and activists are permanently silenced for holding the line against the relentless march of corporations and their collaborationist governments. Killings of defenders have doubled over the past decade, and the frontlines of biodiversity and climate such as Colombia and the Philippines are the hotspots of these killings.

And so we will collectively act to hold governments of nations to account to their social contracts with their peoples—public interest dictates they should commit to prioritizing the people’s needs, which includes ensuring our economies operate within the limits of our planet’s limits, and ensuring that people’s inalienable rights to a clean and healthy environment are upheld. They should also recognize that people on the ground have the most valid solutions to the climate crisis, from indigenous and community conserved areas to land cultivation areas and community based renewable energy systems.

Second, at COP26 we will demand Real Zero, not Net Zero. This means we will reject the various false climate solutions being peddled by governments and corporations that try to delay the urgent need to stop the climate crisis at its source.

We are expecting new and old proposals of the supposed ways to work-around the fundamental solution of cutting down on the consumption of fossil fuels. Some are proposing technological solutions such as carbon capture and storage plants in Timor Leste, and even a decades-old nuclear power plant here in the Philippines. Some are even branded as supposedly ‘nature-based’ such as REDD plantations across Asia and Latin America.

False solutions try to hide what science and justice has already demonstrated—that what we need are deep, drastic, and binding emissions cuts from the advanced capitalist countries and carbon major companies. Please, stop changing the topic.

Third, we will push back on the downplaying of the common but differentiated responsibilities in addressing the climate crisis by demanding a just transition anchored on the historic injustices the Global South has experienced at the hands of Developed Nations.

And this is not only referring to the biggest contributors to historic greenhouse gas emissions—there is little or no talk to historic injustices of ‘resource curses and traps’, the neocolonial subjugation of economies resulting in chronic poverty and, consequently, climate vulnerability. For instance, much of the Philippines’ forest loss was from the United States’ colonial timber industry.

Their imposition of structural adjustment programs and onerous loans have shackled our economy at their mercy. Even in present times when we experience the climate and ecological crises alongside the pandemic crisis, we are still forced to service the resulting debts from these impositions instead of funding a just and green economic recovery that could have been an opportunity to address these intersecting crises. Even UN Secretary General Antonio Guterres has called for debt reliefs amidst the protracted COVID crisis.

Lastly, we will assert that polluter and plunderer countries and economies must pay. We will demand just compensation for the loss and damages of climate-impacted nations and peoples. We will demand developed nations to commit to the climate finance targets recommended in the latest IPCC reports.

Anticipating the limits and expected failings of the COP26 negotiations, these red lines must be fought both inside but most especially outside the climate talks if we are to win back this world from corporate capture and imperialist domination. We call on our fellow advocates, activists, and defenders to join us in the series of initiatives organized under the banner of the Southern People’s Action on COP26 or SPAC26, notably in mobilizing on November 6 declared by climate justice movements as a Global Day of Action for Climate Justice, and on November 9, a rallying point inside the COP26 green zone where we will explore visions from the ground of the world we want to create.