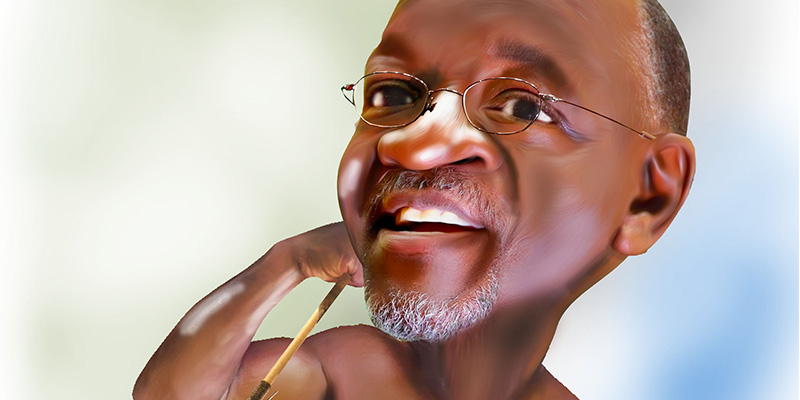 The most tragic thing about the late Tanzanian president, John Pombe Magufuli, is that he and countless other Tanzanians might have died from a virus that he denied existed in his country. Although Tanzanian officials insist that the 61-year-old leader died from heart-related complications, it is widely rumored that he ultimately succumbed to COVID-19. Many of his top government officials have died from the disease in recent months. His mysterious disappearance at the end of February also suggested that he did not want his illness to be made public. As one Kenyan commentator put it, “Magufuli is a sad lesson of the illusion of invulnerability and indestructibility that newly-minted dictators revere.”

It did not have to end this way. When he was first elected president in 2015, Magufuli was lauded for his no-nonsense approach to corruption and for reducing wastage and grandiosity in government, earning him the moniker of “Bulldozer.” Jaded Kenyans, who have in recent years seen millions of dollars being stolen or misappropriated under the debt-ridden government of Uhuru Kenyatta, looked on with envy at their neighbor. Magufuli restricted unnecessary foreign travel by his cabinet members and was known to personally inspect hospitals and other public service facilities to see if they were doing their job. The Tanzanian president did not even shy away from telling off so-called “development partners.” He was probably the only African leader to have told China off for its punitive infrastructure loans (see the ongoing controversy over whether China will seize the Port of Mombasa if Kenya defaults on its loans). Kenyans even created the hashtag #WhatWouldMagufuliDo to remind their own leaders what they were doing wrong.

But as the years went by, Magufuli became increasingly authoritarian, but not in the usual way of African dictators—which often involves the use of military might and the rigging of elections—but in a bizarre Donald Trump kind of way. Despite being a highly qualified scientist (he held a PhD in Chemistry), Magufuli turned his back on science last year by announcing that there was no coronavirus in Tanzania. He refused to impose lockdowns and social distancing measures (let alone consider the option of less extreme response strategies), and stopped releasing public health data on the number of COVID-19 cases in Tanzania. This not only made Tanzanians more vulnerable to the virus, but also posed health risks to countries that shared a border with Tanzania. Schools and restaurants remained open even as stories of people dying in hospitals from “pneumonia” were spreading.

The cracks had already begun to appear within months of his presidency. Shortly after assuming office, Magufuli started displaying the hallmarks of a tin-pot dictator. He banned political activities on the pretext that they interfered with “nation building.” He curtailed media freedom and arrested opposition leaders. Journalists who opposed his policies were harassed. In 2017, he decreed that girls who fell pregnant would not be allowed to attend school, a policy that shocked education officials and women’s rights activists alike. He also started displaying xenophobic tendencies that portrayed foreigners as the enemies of the Tanzanian people.

Commenting on his rule, the researcher Abdullahi Boru Halakhe described the difference between Magufuli and his widely respected and revered predecessor Julius Nyerere as the following: “Nyerere was an outward-looking globalist who saw Tanzania as a leader in world affairs. He invited people of African and non-African origin to witness Tanzania’s nascent experiment with an alternative model of governance and economic independence that was not controlled and exploited by global capital. Magufuli, on the other hand, is an inward-looking provincial nativist who wants a Tanzania for Tanzanians alone.”

Despite its poverty and dependence on donor aid, Tanzania has always been viewed as a nation that does not suffer from the sicknesses of its neighbor Kenya, where an avaricious and visionless political elite has no qualms about hollowing out the state for its own benefit, or of Uganda, where an ageing dictator is ruthlessly crushing a youthful opposition to maintain a hold on power. When a Tanzanian is in the room, Kenyans feel slightly uncomfortable, even ashamed, because we know that unlike Kenya, Tanzania is held together by an ideology that is not centered around primitive wealth accumulation and individualism, and also because we have never had a visionary leader like Nyerere. Fondly called “Mwalimu” (meaning teacher in Kiswahili), he once said that “We, the people of Tanganyika [what Tanzania was called before its union with Zanzibar in 1964] , would like to light a candle and put it on top of Mount Kilimanjaro which would shine beyond our borders giving hope where there was despair, love where there was hate, and dignity where there was before only humiliation.”

While Nyerere’s African socialist experiment of Ujamaa was largely an economic failure in Tanzania, it left a psychological and social legacy of brotherhood and unity among the people. While Kenyans often deride Tanzania for its socialist tendencies that have only spawned more poverty, they have always maintained a certain amount of respect for the country and its leaders, even those who ended up being corrupt—because we know that despite its poverty, Tanzania has always held the moral high ground on affairs to do with the continent. When Kenya was secretly supporting the apartheid regime in South Africa in the 1970s, Tanzania was the frontline state that was actively arming and hosting the African National Congress and Pan-Africanist Congress’s anti-apartheid struggle. When Kenya almost descended into an ethnic-based civil war after the 2007 elections, it was the Tanzanian president, Jakaya Kikwete (among other eminent African leaders), who was brought in to mediate with the warring political factions. Kenyans know that when confronted with an ethical dilemma, Tanzanians will always strive to do the right thing.

When I was in Dar es Salaam for a meeting just after the Kenyan presidential election in 2013, it was a Tanzanian taxi driver who reminded me that Kenyans had made a mistake by voting in two people who had been indicted for crimes against humanity at the International Criminal Court. “Why did they do it?” he asked me. It was a question laced with incredulity, as if to remind me that despite claiming to be the economic powerhouse of the region (although Tanzania and Ethiopia’s economic growth rates have surpassed it in recent years), Kenyans lacked a moral conscience.

The death of a sitting president would most likely have led to a power vacuum in African countries such as Kenya, where ethnic kingpins would no doubt have jostled for power and positions and created conditions for conflict. But Tanzania, once again, has showed us the way. Vice President Samia Suluhu Hassan was sworn in without much fuss or opposition as Tanzania’s president the day after Magufuli’s death, becoming the first female head of state in Eastern Africa, and a potential role model for aspiring women politicians across the region.

Her immediate task will no doubt be to tackle the COVID-19 pandemic that has led to a deadly third wave in many African countries, and to convince the international public health community that Tanzania is back on board. Since she is relatively unknown, even within Tanzania, she will also need to carve her own unique identity as an African leader that is not perceived as a continuation of her predecessor’s legacy.