USA: For Right-Wing Extremists the Attack on Capitol Hill Was a Victory 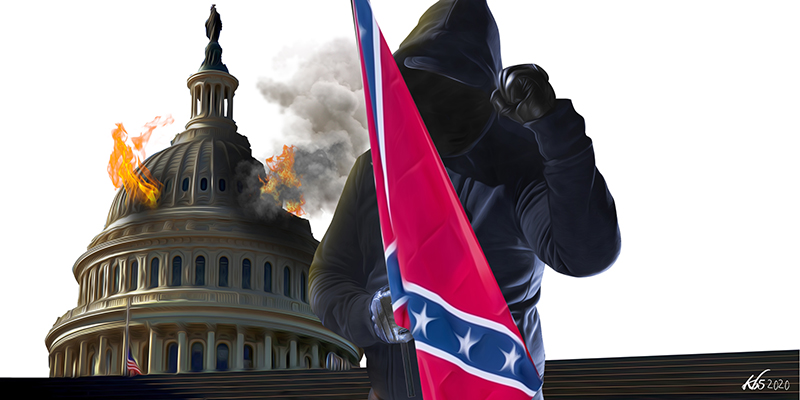 As attacks grow more shocking and dramatic, the size of their audience increases accordingly. While most observers are terrified and outraged by such violence, a small minority become inspired enough to plan attacks of their own. This is how extremist movements grow. This is how they seek to bend the world to their will.

Social media has dramatically increased the effectiveness of spectacular acts of terror. In 2014, ISIS militants used the viral executions of two American hostages to declare war on the United States. They were rewarded with an exponential increase in Western media coverage and tens of thousands of recruits from more than 100 countries. In 2019, a New Zealand-based white supremacist livestreamed his murder of 51 Muslim congregants in the city of Christchurch. His actions prompted numerous copycat attacks and a global resurgence of white ethno-nationalism.

Yet the media impact and symbolic power of these attacks are dwarfed by the events of January 6, 2021, during which far-right extremists stormed and occupied the U.S. Capitol at the encouragement of President Trump. Several carried firearms. Others reportedly planted improvised explosive devices. In less than two hours, they overwhelmed federal police and forced the Congress to flee. They breached the seat of American government that had stood inviolate for 211 years. It was a violent, extraordinary, unthinkable victory; one whose images and videos captivated the world.

This was the most spectacular domestic extremist attack in American history. The individuals who perpetrated this attack will be mythologized as heroes among future extremists. A generation of far-right recruits too young to have participated will spend their lives dreaming of again seizing the U.S. Capitol. In the words of writer Osita Nwanevu, this will become the “Woodstock” of the far-right — the victory and spectacle by which all future actions are measured.

Many of the individuals who directly participated in this action have undergone years of radicalization in extremist online communities and developed a unique culture steeped in ironic violence. They have come to venerate street fighting as the ultimate form of political expression and can name various skirmishes — the 2017 U.S. presidential inauguration, protests in Berkeley and Portland, the “Unite the Right” rally in Charlottesville, the deadly counter-protest in Kenosha, Wisconsin — as a veteran might count battles. Their ranks have swelled in recent months thanks to the popularity of the QAnon delusion and baseless claims of voter fraud that have been aggressively amplified by Trump and his allies.

In some ways, the attack on the U.S. Capitol was the culmination of this violent and conspiratorial movement of pro-Trump communities. Yet because the attack was so catastrophically effective, it also represents the birth of the post-Trump extremist movement. As casual Trump supporters peel away from the network in the weeks to come, they will be replaced by a new cadre who are less politically engaged but far more likely to undertake acts of violence. So it has been with the evolution of extremist movements around the world; so it will now be in the United States.

Two factors will make this post-Trump extremist movement uniquely dangerous. The first is the transition to anti-state violence. Participants in the January 6 attack routinely assaulted U.S. Capitol Police (often, ironically, while carrying pro-police paraphernalia). Following the killing of one female participant by law enforcement, online supporters of the attack darkly speculated that the police had been infiltrated by antifa “terrorists.” The woman was quickly recast as a martyr, one whose death might be the spark of a bloody revolution.

Previous far-right, anti-state movements have struggled to gain traction under the Trump presidency. The most successful of these — the so-called “Boogaloo” movement — hid its overt anti-state violence under layers of subtext and irony. When Boogaloo supporters did engage in acts of anti-state terrorism, as with the murder of two California security officers in June 2020, they sapped the movement of popular support. Under a Biden administration, however, this cognitive dissonance will no longer be an issue. If state authorities are seen to be corrupt and working at the behest of a Democratic administration, they will be targets.

The second factor is the mainstream popularity of the far-right extremist movement in the United States. For years, Trump has conditioned Republican voters to support violence as a means of settling political disputes. From the podium, Trump has regularly encouraged assaults on journalists and dehumanized racial and ethnic minorities. This rhetoric has carried terrible consequences. According to a January 6 YouGov poll, 45 percent of Republican voters supported the storming of the U.S. Capitol, seeing it as just another kind of political expression.

This means that a post-Trump extremist movement — even one that routinely engages in violence — may benefit from a level of political support not seen since that of the Ku Klux Klan in the Reconstruction-era American South. And so long as the movement remains politically popular, there will be politicians who seek to court it. As much could already be seen when the U.S. Congress reconvened early in the morning of January 7. In their remarks, several Republican legislators sought to trivialize or excuse the attack that had forced them from their chamber. Congressman Matt Gaetz (FL-1) went so far as to blame antifa activists, whom he alleged — without evidence — had initiated the attack to give Trump supporters a bad name.

The violent extremist movement inspired by the events of January 6 will rank as one of the great challenges of the Biden presidency. Diminishing the strength of this movement will require disentangling isolated, angry Trump supporters from the much smaller core of extremists who seek to do Americans harm. It will require sapping the January 6 attack of its myth-making potential and to ensure that it is viewed, rightly, as a national embarrassment. Most of all, it will require confronting the pundits and conspiracy theorists who will seek to boost the far-right extremist movement in a grasping bid to retain their relevancy.

This work must begin immediately. The stakes were high before. They are higher now.

The DFRLab team in Cape Town works in partnership with Code for Africa.