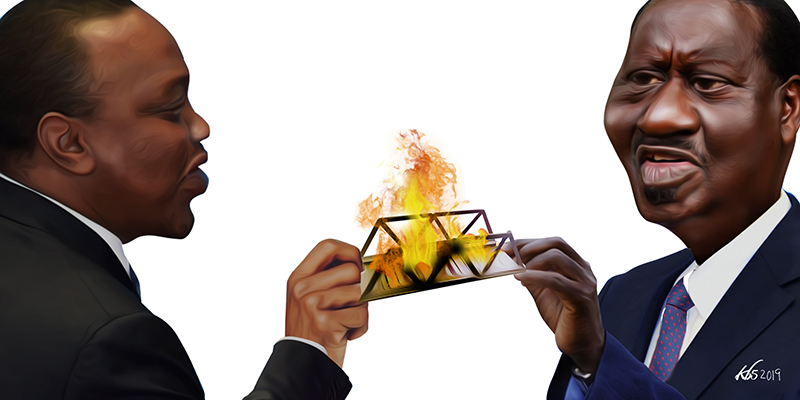 On March 9, 2018 Kenya’s President Uhuru Kenyatta and the leader of the main opposition, Raila Odinga, surprised their supporters when they publicly shook hands and agreed to work together. This was not the first time Kenya’s rival elites had concluded a political pact to work together.

Political pacts have been common among elites throughout the post-colonial period. Both Kenyatta and Odinga had concluded pacts before. Odinga made one with former president Mwai Kibaki following violence over 2007 presidential election results. Uhuru formed an alliance with a former rival, William Ruto, and won the 2013 elections.

The Uhuru-Raila handshake, however, was surprising because there was no open mediation taking place. Furthermore, events of the previous month showed they were bitter with each other. They had continued to hold stubbornly to their positions.

Odinga’s opposition party, the National Super Alliance, was behind violent protests to reject the declaration of Kenyatta as the winner of a protracted, and disputed, general election. The first poll, held in August 2017, was annulled by the Supreme Court. This led to a fresh poll held in October 2017.

But even the rerun was rejected by Odinga and the National Super Alliance. They rejected Kenyatta’s presidency and on January 30, 2018 installed Odinga as a People’s President. The Alliance was made up of several ethno-regional parties led by their respective leaders.

Just over a month later Kenyatta and Odinga were shaking hands. They endorsed a framework to address the governance challenges that had contributed to the country’s divisive politics and ethnic antagonism. The framework was called the Building Bridges Initiative.

The handshake ended the political stand-off. The political allies of both men began to support one another. This included their representatives in the National Assembly and the Senate, where Odinga’s allies supported government policies.

Why did the arch-rivals easily come together and agree to establish the Building Bridges Initiative?

Behind the Building Bridges Initiative

The handshake and attendant initiative are best understood by recognising that Kenyan politics is fundamentally shaped by competition between and among political elites and their ethnic groups. The competing ethnic elites have informal authority and control over their respective groups.

They use these to advance their economic and political interests as well as to negotiate distribution of power and resources. Their bargains and interests lead to political pacts. These are always in flux because the practice of “winner takes all” politics results in the exclusion of losers from new power arrangements.

But those excluded can occasion the making of new pacts if new dynamics lead to their inclusion into power arrangements.

Kenya’s demographic structure and its electoral system contributes to this state of affairs. The country has five large ethnic groups that comprise about 65% of the population. Kenya’s constitution also requires presidential candidates to win by 50% plus one vote and this provision compels formation of alliances. The result is that agreements are broken – and built – on the basis of calculations about the best alternative coalition for winning an election.

The five main groups are: President Kenyatta’s Kikuyu ethnic group; Raila Odinga’s Luo; William Ruto’s Kalenjin ethnic group; the Kamba; and the Luyia. The Kikuyu is the largest and has had a president three times – Jomo Kenyatta (Uhuru Kenyatta’s father), at independence in 1963; then Mwai Kibaki (2007 to 2013); and Uhuru Kenyatta from 2013 to the present. The Kalenjin held the top seat under Daniel Arap Moi, who took over following the death of Jomo Kenyatta in 1978. Moi remained in office until 2002.

The handshake and the Building the Bridges Initiative evolved alongside the emerging signs of a collapse of the pact between Kenyatta and his deputy Ruto. They had a pact for the purpose of winning the 2013 election. But after Kenyatta won the 2017 disputed election and began a final term of office, this pact had clearly outlived its purpose.

Kenyatta shared power with Ruto in the first term but after winning the 2017 elections he began to concentrate power by taking away responsibilities that had created the perception of Ruto as a co-president. In the first term, Ruto would nominate his own candidates for appointment to various positions. He also coordinated implementation of government development projects across the country.

Secondly, Ruto began to mobilise an independent political support base among Kenyatta’s Kikuyu and allied ethnic groups in the Mount Kenya region. Kenyatta’s supporters interpreted this as undermining Kenyatta’s control and authority over the Kikuyu.

Moreover, increasing levels of corruption in government development projects had become a matter of concern. Many of Kenyatta’s supporters accused Ruto and allies of accumulating wealth for the purpose of financing his 2022 presidential campaigns. They accused them of undermining the potential of these projects to mark Kenyatta’s legacy.

Kenyatta turned to Odinga for a new pact to cut off Ruto’s political influence and end violent protests that challenged his legitimacy. While some saw Kenyatta as a legitimately elected president, others saw him as lacking legitimacy. This also applied to Odinga.

Although installed as a People’s President, he lacked the formal authority to govern. This was true even in opposition areas. Without access to state resources and without control of any institution, Odinga could not give any benefits to his allies, many of whom supported the opposition on the hope that they would benefit if they got to power.

The proposals were meant to align elite interests to ensure cohesion. They appeared focused on ensuring that the largest ethnic communities got some presence in the national executive. The losers would also get a post and be active in parliament.

Kenyatta and Odinga have mobilised other ethnic elites to support the recommendations. They have brought several parliamentary parties to their sides.

These new arrangements are meant to provide parliamentary support for the initiative. They were also designed to mobilise popular support because some of the proposals require a vote by Kenyans in a referendum.

Parliament is likely to pass the laws to support the proposed changes. But a referendum will pose a major challenge – for the initiative as well as for Kenyatta and Odinga.

Kenya has a bad history of referenda. One held in 2005 and another in 2010 polarised the country. One to amend the 2010 constitution will not be different.

Ruto appears excluded from the emerging power arrangements. He is therefore likely to mobilise his supporters against the changes. He and his allies have already opposed the Building Bridges Initiative by pointing out that its recommendations are meant to benefit the rich elites – and those from a “dynasty” background – rather than the ordinary voters and sons of poor peasants like himself.

The proposed distribution of power may be endorsed at the referendum given the number of ethnic elites in the newly evolving political agreements. The proposal to enable many ethnic elites to access political power is also in line with the self interest of the elites.

Nonetheless, if the proposals get endorsed at the referendum or win support at parliament, the new political pact will collapse as others have before. The powerful actors in the new arrangement will begin to disagree on the distribution of power – or others will renege on what has been agreed upon. Indeed trust deficit is common among the elites.

This will widen political divisions and lay the context for a highly competitive and a violent 2022 election.