Elite Feuds: Are the SGR Protesters in Mombasa Pawns in a Larger Battle for Control of Port Services? 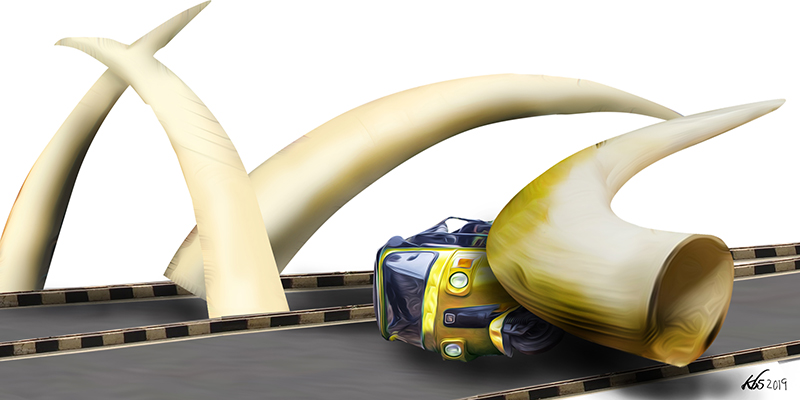 Protests in Mombasa against a directive that all cargo passing through the Port of Mombasa should be transported via the Standard Gauge Railway (SGR), and cleared at the Inland Container Depot (ICD) in Nairobi, have continued despite a meeting between the political leadership of Mombasa County and the national government where – the public was told – the directive had been suspended. At the heart of the debacle, of course, lies the question of the high cost that was involved in building the SGR, and the fact that since it was launched in January 2018, the SGR freight service has not been able to compete favourably with trucks plying the Mombasa-Nairobi highway.

The protestors have argued that they are protecting jobs. A study commissioned by the County Government of Mombasa has shown that 2, 987 employees working in Mombasa for Container Freight Stations (CFSs), fuel stations, and as truck drivers have already been laid off since the SGR began its freight operations, and that over 8,000 more jobs are under threat following the directive. Granted, the fear of economic exclusion and the loss of jobs is bound to be a politically explosive issue anywhere in Kenya. But could the protestors in Mombasa be gullible participants in a larger battle between entrenched business interests for private control of cargo storage facilities? The evidence suggests that the protestors in Mombasa are actually crying for the scraps of what was already a broken system that benefitted the elite few.

It is notable that the leading protagonists in the SGR drama, and the politics surrounding the establishment of inland storage facilities at Nairobi and Naivasha – especially before the March 9 handshake – were President Uhuru Kenyatta and the County Governor of Mombasa, Hassan Joho, a powerful businessman with interests in freight stations at the Coast.

Both Kenyatta and Joho are members of families that own huge tracts of land in the country. The Kenyatta family is known to own massive acreage up-country, especially in the Central highlands and in Naivasha, and modestly less along the Coast, where Arab, Indian and some Swahili families (the Johos consider themselves Swahili) have dominated land ownership since long before Kenya’s independence.

Could the protestors in Mombasa be gullible participants in a larger battle between entrenched business interests for private control of cargo storage facilities?

History is replete with examples of struggles over the location, and therefore the control of commerce and collection of rent for port storage all over the world. With the expansion of its capacity in recent years the Port of Mombasa has become increasingly important to powerful economic players with control over land, and with influence over the country’s politics. In fact, the nexus between political influence, land ownership and port business became clearer when services at the port almost ground to a halt in 2008 following the post-election violence that broke out that year.

Due to lack of container storage space, ships were forced to queue out at sea for indefinite periods of time while importers paid high ship delay surcharges. In fact, matters got so bad – cargo entering Mombasa could take up to 10 days to clear – that the then Managing Director, Abdallah Mwaruwa, was sacked two years into his appointment. It was in this context that a group of private investors proposed to the Kenya Ports Authority (KPA) that they provide storage units in order to ease the burden on the container terminal. Soon thereafter, Container Freight Stations (CFSs) – managed privately but licensed as sites for customs clearance by the Kenya Revenue Authority (KRA) – rapidly spread in and around Mombasa.

There are now more than 20 CFSs scattered throughout the town around which operates a ring of local powerbrokers and owners of extensive and commercially viable pieces of land in and around Mombasa. The CFSs have persisted and multiplied with the expansion of the port itself but ironically, they are threatened by the expansion in port infrastructure, in particular the SGR and its inland dry ports.

The nexus between political influence, land ownership and port business became clearer when services at the port almost ground to a halt in 2008 following the post-election violence that broke out that year.

From their inception, CFSs have been a source of aggravation for importers, shipping lines and the residents of Mombasa. The decentralisation of customs clearance to these facilities has caused problems of oversight, with accusations of corruption, including malpractice and smuggling. Many CFSs are also known for their incompetence, mishandling of cargo, overloading and fraudulent documentation. Containers have been damaged and cargo has disappeared. Clearing is deliberately delayed in order to extract higher fees from importers, which increases consumer prices.

Since 2012, powerful players, including major shipping lines and the governments of Uganda and Rwanda, have successfully lobbied to circumvent the facilities altogether, removing themselves from the CFS conversation long before the SGR was launched. In this way, some goods bound for Uganda are cheaper than those destined for Kenya. Less powerful importers have continued to operate at the mercy of CFSs whose owners have accrued greater profits, even as the cost of clearing cargo at the port has increased.

For Mombasa residents, CFSs have increased congestion, as cargo is moved around twice – from the port to the CFS, and then again out of the CFS to final destinations – worsening traffic, causing accidents and damaging roads.

The threat that the SGR and its inland container depots posed to the CFSs in Mombasa was clear even before the SGR began its operations. The tussle between Uhuru Kenyatta and Hassan Joho between 2013 and 2017, while touching on various issues around the fate of devolution, was, in reality, deeply personal. To transfer cargo handling to Nairobi, and then to Naivasha, is to not only transfer the problems that CFSs have caused in Mombasa to other towns, but it is also to provide ample business opportunities to other large landowners there – members of families such as the Kenyattas – moving it away from the hands of families such as the Johos. This was a major contribution to Joho’s opposition to Jubilee before the 2018 handshake.

Amid claims that the SGR is threatening the Coast economy, companies associated with Hassan Joho and Mohammed Jaffer – both key financiers of Raila Odinga’s campaign for the presidency since at least 2007– are reported to have acquired lucrative deals with the SGR and the ICD in Nairobi under unclear circumstances; if you can’t beat the system, do business with it!

The tussle between Uhuru Kenyatta and Hassan Joho, while touching on various issues around the fate of devolution, was, in reality, deeply personal.

In sum, if the protests against the directive to transport all cargo on the SGR are successful (an unlikely outcome), this will result in the protection of businesses that have long enjoyed near-monopoly advantages at the expense of the wider public interest in Mombasa.

On the other hand, the state is likely to respond – as it did – with more violence, as such protests threaten entrenched business interests with influence on public policy that are located away from the Coast.

My argument is that the “protection” of CFS businesses in Mombasa from the noose of the SGR will not go a long way in fixing the economic problems afflicting the county in particular, and the Coast region in general.

Someone should impress it upon the protestors that scraps from a broken system benefitting the elite few will not end the region’s long-felt sense of exclusion.