South Africa: Xenophobia Is in Fact Afrophobia, Call It What It Is 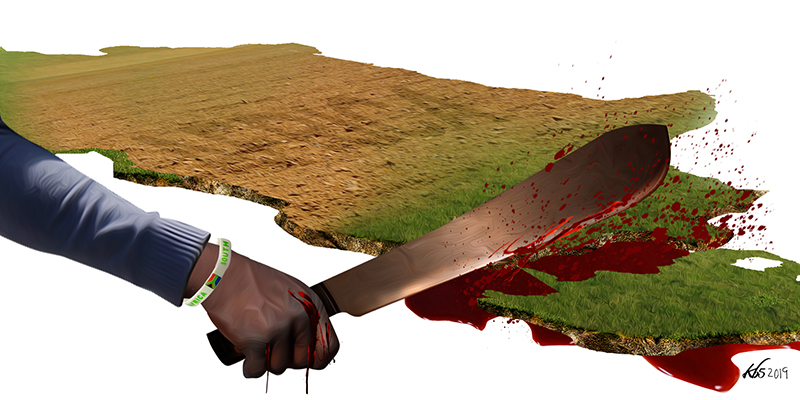 Written in May 2008, as African bodies burned on the streets of South Africa, Ingrid De Kok’s throbbing poem Today I Do Not Love My Country poignantly captures the mood of an Afrophobic nation fluent in the language of violence and name-calling.  (I say Afrophobic because South Africa does not have a xenophobia problem. We don’t rage against all foreigners—just the poor, black ones from Africa.)

The irony of South Africa’s most recent attacks on African immigrants is that they happened in the wake of the African Continental Free Trade Agreement which positions the country as an economic gateway to the continent. As the debris is cleared off the streets of Johannesburg after a week of violent looting and attacks against African migrant-owned businesses that saw eleven people killed and almost 500 arrested, Pretoria now faces calls to boycott South African-owned businesses on the continent.

The South African government has remained steadfast in its denial of Afrophobia, opting instead to condemn “violent attacks” and highlight the criminal elements involved in looting African-owned businesses. The police attributed the attacks to “opportunistic criminality”. By denying that these are Afrophobic attacks, everyone can deny the role of South Africa’s political leadership in fomenting the hatred.

The Afrophobic attacks are not spontaneous criminal mobs preying on foreigners. They are the result of an orchestrated, planned campaign that has been fuelled by the ongoing anti-immigrant rhetoric of South African politicians.

The All Truck Drivers Forum (ATDF), Sisonke People’s Forum and Respect SA stand accused of orchestrating last week’s violence. ATDF spokesperson, Sipho Zungu, denied that his group had instigated the violent looting, saying that “the nation is being misled here.” Zungu did stress, however, that South African truck drivers “no longer have jobs” and the government “must get rid of foreign truck drivers.”

Zungu echoes the sentiments of many poor South Africans, and their views are the end result of a drip-feed of anti-immigrant messages from South African politicians, particularly in the run-up to this year’s elections.

Anti-African violence in South Africa is fuelled by exclusion, poverty and rampant unemployment. This isn’t black-on-black violence. This is poor-on-poor violence.

One-third of South Africans are unemployed. Thirteen per cent of South Africans live in informal settlements, and a third of South Africans don’t have access to running water. The problems are a combination of the country’s apartheid past and rampant corruption and mismanagement within the ANC-led government. Crime is climbing, mainly due to corrupt and dysfunctional policing services, high unemployment and systemic poverty.

By denying that these are Afrophobic attacks, everyone can deny the role of South Africa’s political leadership in fomenting the hatred.

South African politicians from across the spectrum have blamed immigrants for the hardships experienced by poor South Africans. Political parties tell voters that foreigners are criminals flooding South Africa, stealing their jobs, homes and social services, undermining their security and prosperity.

Even the government sees poor and unskilled African migrants and asylum seekers as a threat to the country’s security and prosperity. Approved in March 2017, its White Paper on International Migration, separates immigrants into “worthy” and “unworthy” individuals. Poor and unskilled immigrants, predominantly from Africa, will be prevented from staying in South Africa by any means, “even if this is labelled anti-African behaviour” as the former Minister of Home Affairs, Hlengiwe Mkhize, pointed out in June 2017. The message is simple: there is no place for black Africans in South Africa’s Rainbow Nation.

In November 2018, Health Minister Aaron Motsoaledi claimed in a speech at a nurses summit that undocumented immigrants were flooding South Africa and overburdening clinics and hospitals. When immigrants “get admitted in large numbers, they cause overcrowding, infection control starts failing”, he said.

Johannesburg—the epicentre of the anti-African violence—is run by the Democratic Alliance (DA), the second-largest political party in South Africa after the ruling African National Congress (ANC). DA mayor, Herman Mashaba, has been leading the war against African immigrants.

In a bid to attract more support, Mashaba and the DA have adopted an immigrant-baiting approach straight out of Donald Trump and Jair Bolsonaro’s playbooks.

Mashaba has described black African migrants as criminals and has spoken of the need for a “shock-and-awe” campaign to drive them out.

In February 2019, Mashaba diverted attention away from protests against his administration’s poor service delivery in Johannesburg’s Alexandra township by tweeting that foreigners had made it difficult to provide basic services.

On August 1, police operations in Johannesburg to find counterfeit goods were thwarted by traders who pelted law-enforcement authorities with rocks, forcing the police to retreat. Social media went into overdrive, with many accusing the police of being cowards running away from illegal immigrants. Mashaba was “devastated” by the police’s restraint. A week later over 500 African immigrants were arrested after a humiliating raid, even though many said they showed police valid papers.

In 2017, South Africa’s deputy police minister claimed that the city of Johannesburg had been taken over by foreigners, with 80% of the city controlled by them. If this is not urgently stopped, he added, the entire country “could be 80% dominated by foreign nationals and the future president of South Africa could be a foreign national.”

None of this anti-immigrant rhetoric is based on fact. Constituting just 3% of the South African population, statistics show that immigrants are not “flooding” South Africa. They aren’t stealing jobs from South Africans and nor are they responsible for the high crime rate. South Africa’s crime problem has little to do with migration, and everything to do with the country’s dysfunctional policing services, unemployment and poverty.

Johannesburg—the epicentre of the anti-African violence—is run by the Democratic Alliance (DA), the second-largest political party in South Africa after the ruling African National Congress (ANC). DA mayor, Herman Mashaba, has been leading the war against African immigrants.

But South African politicians don’t let facts get in the way.  After all, it’s easier to blame African immigrants rather than face your own citizens and admit that you’ve chosen to line your own pockets instead of doing your job. If you can get others to shoulder the blame for the hopeless situation that many South Africans find themselves in, then why not?

South Africans are rightfully angry at the high levels of unemployment, poverty, lack of services and opportunities. But rather than blame African immigrants, frustration must be directed at the source of the crisis: a South African political leadership steeped in corruption that has largely failed its people.

The African Diaspora Forum, the representative body of the largest group of migrant traders, claimed that the police failed to act on intelligence that it had provided warning of the impending attacks. It took almost three days before Cyril Ramaphosa finally issued weak words of condemnation and for his security cluster to meet and strategise.  All of this points to a government refusing to own its complicity and deal with the consequences of its words.

South Africa has fallen far and hard from the lofty Mandela era and Thabo Mbeki’s soaring “I am an African” declaration.

Senior political leaders in South Africa are blaming vulnerable Africans for their failure to adequately provide a dignified life for all South Africans. Until this scapegoating stops, violent anti-African sentiment will continue to thrive, and South Africa will entrench its growing pariah status on the continent.