Africa and Palestine: A Noble Legacy That Must Never Be Forgotten 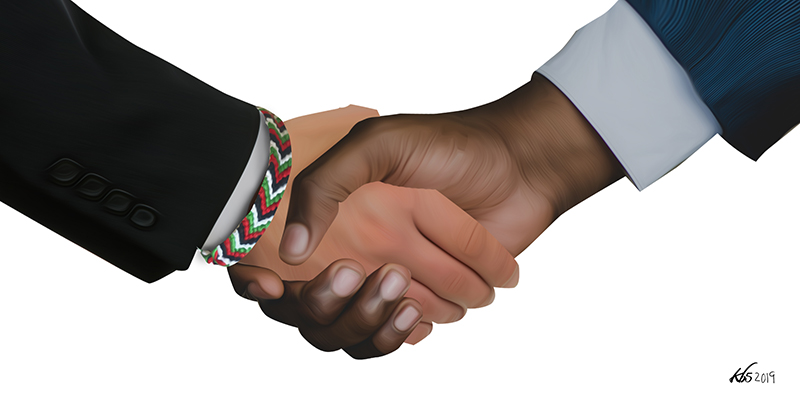 Europe’s “Scramble for Africa” began in earnest in 1881 but never ended. The attempt at dominating the continent using old and new strategies continues to define the Western relationship with this rich continent. This reality was very apparent when I arrived in Nairobi on June 23. Although I had come to address various Kenyan audiences at universities, public forums and the media, I had also to learn. Kenya, like the rest of Africa, is a source of inspiration for all anti-colonial liberation movements around the world. We Palestinians can learn a great deal from the Kenyan struggle.

Although African countries have fought valiant battles for their freedom against their Western colonisers, neocolonialism now defines the relationship between many independent African countries and their former occupiers. Political meddling, economic control and, at times, military interventions – as in the recent cases of Libya and Mali – point to the unfortunate reality that Africa remains, in myriad ways, hostage to Western priorities, interests and dictates.

In the infamous Berlin Conference of 1884, Western colonial regimes attempted to mediate between the various powers that were competing over Africa’s riches. It apportioned to each a share of the African continent, as if Africa were the property of the West and its white colonists. Millions of Africans died in that protracted, bloody episode unleashed by the West, which shamelessly promoted its genocidal oppression as a civilisational project.

Like most colonised peoples in the southern hemisphere, Africans fought disproportionate battles to gain their precious freedom. Here in Kenya, which became an official British colony in the 1920s, Kenya’s freedom fighters rose in rebellion against the brutality of their oppressors. Most notable among the various resistance campaigns, the Mau Mau rebellion of the 1950s remains a stark example of the courage of Kenyans and the cruelty of colonial Britain. Thousands of people were killed, wounded, disappeared or were imprisoned under the harshest of conditions.

Palestine fell under British occupation, the so-called British Mandate, around the same period that Kenya also became a British colony. Palestinians, too, fought and fell in their thousands as they employed various methods of collective resistance, including the legendary strike and rebellion of 1936. The same British killing machine that operated in Palestine and Kenya around that time, also operated, with the same degree of senseless violence, against numerous other nations around the world.

While Palestine was handed over to the Zionist movement to establish the state of Israel in May 1948, Kenya achieved its independence in December 1963.

At one of my recent talks in Nairobi, I was asked by a young participant about “Palestinian terrorism”. I told her that Palestinian fighters of today are Kenya’s Mau Mau rebels of yesteryear. That if we allow Western and Israeli propaganda to define Paestine’s national liberation discourse, then we condemn all national liberation movements throughout the southern hemisphere, including Kenya’s own freedom fighters.

We Palestinians must however shoulder part of the blame that our narrative as an oppressed, colonised and resisting nation is now misunderstood in parts of Africa.

When the Palestine Liberation Organisation committed its historical blunder by signing off Palestinian rights in Oslo in 1993, it abandoned a decades-long Palestinian discourse of resistance and liberation. Instead, it subscribed to a whole new discourse, riddled with carefully-worded language sanctioned by Washington and its European allies. Whenever Palestinians dared to deviate from their assigned role, the West would decree that they must return to the negotiating table, as the latter became a metaphor of obedience and submission.

Throughout these years, Palestinians mostly abandoned their far more meaningful alliances in Africa. Instead, they endlessly appealed to the goodwill of the West, hoping that the very colonial powers that have primarily created, sustained and armed Israel, would miraculously become more balanced and humane.

When the Palestine Liberation Organisation committed its historical blunder by signing off Palestinian rights in Oslo in 1993, it abandoned a decades-long Palestinian discourse of resistance and liberation.

However, Washington, London, Paris, Berlin, etc., remained committed to Israel and, despite occasional polite criticism of the Israeli government, continued to channel their weapons, warplanes and submarines to every Israeli government that has ruled over Palestinians for the last seven decades. Alas, while Palestinians were learning their painful lesson, betrayed repeatedly by those who had vowed to respect democracy and human rights, many African nations began seeing in Israel a possible ally. Kenya is, sadly, one of those countries.

Understanding the significance of Africa in terms of its economic and political potential, and its support for Israel at the UN General Assembly, right-wing Israeli Prime Minister Benjamin Netanyahu has launched his own “Scramble for Africa”. Netanyahu’s diplomatic conquests on the continent have been celebrated by Israeli media as “historic”, while the Palestinian leadership remains oblivious to the rapidly changing political landscape.

Kenya is one of Israel’s success stories. In November 2017, Netanyahu attended the inauguration of President Uhuru Kenyatta. Netanyahu was seen embracing Kenyatta as a dear friend and ally even as Kenyans rose in rebellion against their corrupt ruling classes. Tel Aviv had hoped that the first-ever Israel-Africa summit in Togo would usher in a complete paradigm shift in Israeli-African relations. However, the October 2017 conference never took place due to pressure by various African countries, including South Africa. There is still enough support for Palestine on the continent to defeat the Israeli stratagem. But that could change soon in favour of Israel if Palestinians and their allies do not wake up to the alarming reality.

The Palestinian leadership, intellectuals, artists and civil society ambassadors must shift their attention back to the southern hemisphere, to Africa in particular, rediscovering the untapped wealth of true, unconditional human solidarity offered by the peoples of this ever-generous continent.

Kenya is one of Israel’s success stories. In November 2017, Netanyahu attended the inauguration of President Uhuru Kenyatta. Netanyahu was seen embracing Kenyatta as a dear friend and ally even as Kenyans rose in rebellion against their corrupt ruling classes

The legendary Tanzanian freedom fighter, Mwalimu Julius Nyerere, who is also celebrated in Kenya, knew very well where his solidarity lay. “We have never hesitated in our support for the right of the people of Palestine to have their own land,” he once said, a sentiment that was repeated by the iconic South African leader Nelson Mandela, and by many other African liberation leaders. Today’s generation of African leaders should not deviate from that noble legacy. If they betray it, they betray themselves, along with the righteous struggles of their own peoples.