Bring Back the Herder Conservationist 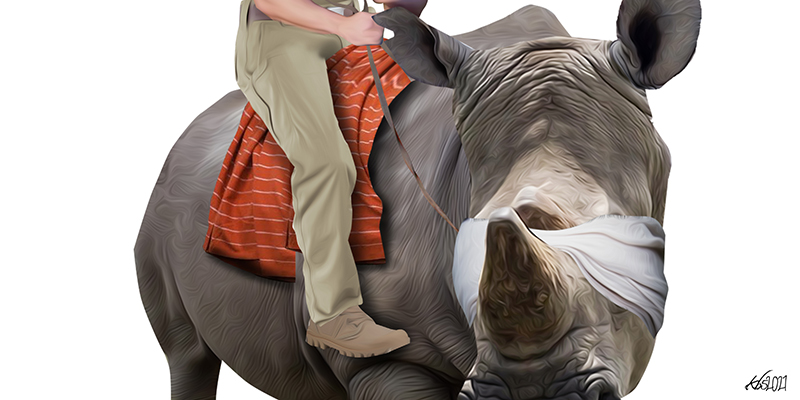 As the world’s biodiversity continues to decline, there is a race to conserve the fauna and flora which is vital for the continued survival of humans. Yet, despite concerted global efforts through frameworks such as the Convention on Biological Diversity, the IUCN red list of species threatened with extinction continues to grow.

Conservation efforts by nation-states and non-state actors have been ongoing for decades, with mixed outcomes. Of particular concern have been the projected benefits to the local communities and the sustainability of conservation efforts. These concerns are particularly pronounced in the case of wildlife conservation in the African Savannah, where local communities — which have been the custodians of the wildlife for centuries — often get the short end of the stick.

While most of the wildlife conservation areas were established by the colonialists, the expansion of conservancies into communal rangelands in Kenya has mainly been driven by non-state actors, gaining praise and condemnation in equal measure.

The early conception of wildlife conservation was one whose objective was to preserve nature in its pristine state, void of human interference — commonly referred to as the “fortress” approach that used fences, boots, and guns to keep human disturbance off the conservation areas. This concept was first applied to the Yellowstone National Park, which was established in the United States in the 1870s, and it soon spread to the rest of the world, reaching Africa mainly through colonial governments.

With its scenic beauty and abundant wildlife, Kenya was among the first countries in Africa to establish wildlife conservation areas on large expanses of land. From their inception, these conservation areas were the preserve of the white foreign tourist, while the communities on whose lands these parks were established were viewed as a threat to their existence. They had no role in the management of the parks and nor did they share in the accrued benefits. Thus, a significant task of the conservation agents was to guard against the community’s interference in the pristine conservation area.

Ironically, these communities had to put up with the damage caused to their farms and livestock by marauding wild animals as the needs and value of wildlife took precedence over the needs and livelihoods of the people. Human-wildlife conflict was the order of the day for the communities living adjacent to protected areas.

Change in perception only came in the 1980s with the advent of participatory approaches and the “bottom up” development discourse. Acknowledgement of the importance of involving communities in conservation efforts led to the adoption of community-based natural resource management approaches that were initially applied in Southern Africa and later in East African countries, including Kenya.

In principle, the community-based conservation approach placed communities at the centre of decision-making in the conservation areas and included them in sharing the benefits as a form of compensation conservation that evolved following the establishment of conservancies in communally managed areas.

In Kenya, the establishment of community conservancies was not primarily motivated by the potential benefits to the communities but rather by the fact that over 65 per cent of the wildlife is on communal lands outside the designated national parks and reserves.

While conservancies were initially established in the areas of southern Kenya where wildlife density was relatively greater, they have now spread across the country. It is presumed that income-generating alternatives for the marginalised and poverty-stricken pastoralists who mainly inhabit these areas have fueled the growth.

In some quarters, the income from conservation is regarded as a substitute to livestock production, and therefore a possible alternative to pastoralism. Moreover, conservancies are regarded as a panacea to poaching, human-wildlife conflict and land degradation. These assumptions have created a fertile ground for the exponential growth of community conservancies, particularly in northern Kenya.

According to the Kenya Wildlife Conservancy Association, 160 conservancies cover approximately 15 million acres of mainly communal rangelands. This expansion has mainly been fueled by the very substantial technical and financial support provided by the Northern Rangelands Trust (NRT). The growth has also been buoyed by the Wildlife Management and Conservation Act of 2013 that provides the legal framework for the establishment of conservancies.

Conservancies are regarded as a panacea to poaching, human-wildlife conflict and land degradation.

With the influence and support of the NRT, certain county governments are currently developing county conservancy laws to provide an additional layer of legal entrenchment. Coming at a time when communities are struggling to register their land, the timing for enacting this law has cast doubts about the proponents’ motives.

The laws being proposed by the counties provide a new institutional framework for the management of conservancies, bringing them directly under the control of the county governments. Some observers say that such legislation is at cross-purposes with the community land management mandate as enshrined in the Community Land Act (CLA) 2016.

Moreover, while conservancies are typically established on designated sections of communal lands, in the NRT model, in the north, the conservancies cover entire areas such as a whole ward, taking up large expanses of land that are also intended for various other uses.

Wildlife conservation is heavily dependent on tourism dollars and with the COVID-19 pandemic persisting, it has come under unprecedented financial strain. According to the Kenya Wildlife Conservancy Association (KWCA), “the collapse of the tourism industry has left parks, reserves, and wildlife conservancies stripped off the vital funding needed to manage land and reward communities”.

Already it is being reported that conservancies in high potential areas such as the Mara are unable to pay their leases, a clear indication that the current conservancy approach is far from sustainable. The near complete collapse of the tourism sector has exposed the fault lines in the high-maintenance conservation models and put into question the achievability of the projected earnings that have been used to justify their establishment.

Running a community conservancy is an expensive affair. For instance, the operational costs of the NRT-initiated and supported conservancies run to a minimum of KSh4 to 6 million per year. According to the NRT’s 2019 annual report, only a few conservancies can raise their own operational costs, let alone generate additional income for the communities.

The near complete collapse of the tourism sector has exposed the fault lines in the high-maintenance conservation models.

In 2019, the conservancies under the NRT had a combined running costs deficit of KSh129 million, a gap currently bridged with donor funds. In a bid to cover the shortfall, the NRT has been lobbying county governments to support the conservancies with Samburu County being the first county to develop a legal framework to provide mechanisms for channeling county funds to the conservancies.

Kenya’s experiences mirror those of Zimbabwe, where the CAMPFIRE project, a world-acclaimed conservation success, stalled immediately donor funding was withdrawn after almost 15 years of operation. The Zimbabwe example of community engagement was based on benefit-sharing from nationalised and well-established parks.

Only a few conservancies can raise their own operational costs, let alone generate additional income for the communities.

One wonders how the Kenyan model, which is based on community conservancies outside government-run conservation areas, can be profitable. Furthermore, trophy hunting and the sale of wildlife hides and ivory were a major income stream in Zimbabwe whereas in Kenya these activities are banned, making it more difficult to generate substantial revenue for a conservancy to be self-sufficient.

It is therefore easy to conclude that most of the conservancies in northern Kenya cannot be self-sustaining without the donor funding they currently receive.

Instead of the armed ranger model, which is expensive and a colonial relic, active herders who are in any case out in the rangelands take up the role of the “herder conservationist”. This approach would involve identifying experienced herders from the various settlements who actively herd livestock in the rangelands. The herder conservationists would be appointed from multiple settlements distributed across the rangelands to cover this large expanse of land which, in essence, conservancy rangers have not been able to cover. This approach would extend wildlife protection to areas beyond the current conservancy precincts at a minimal cost.

The main advantage of this approach is that the herders constantly traverse the grazing landscapes and the rangelands used by wildlife, most of which are not accessible even by the four-wheel drive vehicles used by the ranger scouts. This capacity, coupled with the provision of essential communication and surveillance equipment, is crucial in wildlife conservation.

For conservation to be sustainable within the pastoral livestock production system, an alternative herder-driven approach is more adapted.

The herders do not need to be armed but should be properly incentivised and supervised, reporting to a central command which will in turn work with the Kenya Wildlife Service — the body that is mandated with the protection and conservation of Kenya’s wildlife — to resolve arising problems

The basics of this approach mimic the wildlife protection methods that pastoralist communities employed well before the emergence of the current conservation approach. It also presents another advantage in that it is based on the values that the communities themselves attach to wildlife. Moreover, the use of boots and guns is reminiscent of the largely failed fortress approach to wildlife conservation.

A key lesson deriving from the COVID-19 pandemic is the need to stop putting a value on wildlife based on the tourism numbers it attracts and the income it generates. The value of wildlife as a function of the communities’ social-cultural systems needs to be strengthened and the communities’ appreciation of the intrinsic value of wildlife enhanced. Already, where the community has been sensitized to the need for wildlife conservation, one can spot wildlife browsing alongside livestock in areas where the wildlife is not under protection, for example in Wajir and Garissa counties. In most pastoralist areas, the wildlife drinks water from the same watering points used by the community.

If established, therefore, a herder conservationist system would provide a sustainable way of ensuring that even with minimal incentives communities will protect wildlife. Moreover, the approach significantly reduces the overheads, thereby ensuring long-term sustainability.

The use of boots and guns is reminiscent of the largely failed fortress approach to wildlife conservation.

Furthermore, the conservation approach must take advantage of the ongoing changes in communal land governance which will mean that the community cannot register the conservancies in their current form but must do so through a proxy community-based organisation or wildlife association.

The management committee spearheads land use planning and has oversight in the use of the land. Conservation of the unique fauna and flora of the drylands must feature strongly as one of the land uses in the community plans.

These suggestions are not the ultimate silver bullet for solving the challenges faced by community-based conservation. However, if these and other views are given consideration in the ongoing legal and policy conversations, sustainable conservation approaches are attainable.

The Wildlife Conservation and Management Act of 2013, currently under review, provides an opportunity to embrace alternative views. Also, the county level legislations on conservancies need to consider strengthening the community structures that are already mandated with the management of land and other natural resources on communal lands rather than establishing additional institutional layers, which might be counterproductive. Most importantly, the community’s decision needs to be considered and respected in order to arrive at a sustainable community conservation model.