The West Has Failed 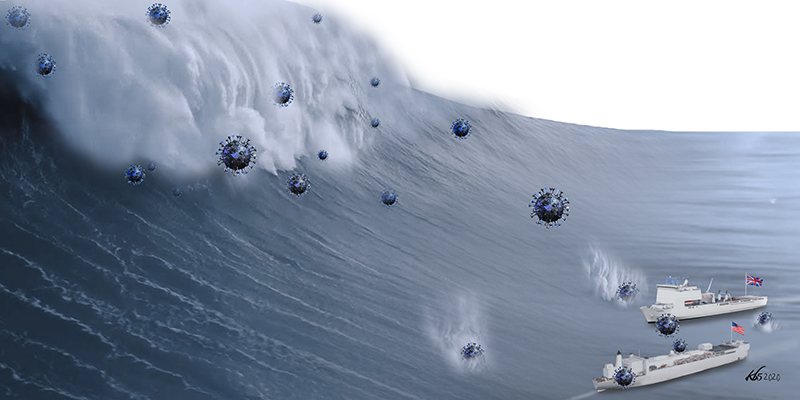 Second, so far, only a small fraction of those infected by the COVID-19 virus have succumbed to it, and despite the pain and disruption of death, we should acknowledge that the total number of unfortunate fatalities from the virus (more than 120,000 globally) still represent a tiny fraction of humanity.

The real fear is how far things will go if not enough is done to stop the spread of the spread.

But what is really at risk is not life, but the way we wish to continue living. This is what is now killing us, and may even kill off the planet.

If we are indeed from here, and not some alien implant, then humanity is truly one of nature’s most sophisticated accomplishments: a being with a level of intelligence, making it capable of manipulating the very thing from which it may have emerged.

Now, what we have wrought with that intelligence is killing us. We are pushing the planet to the point where is cannot maintain life for humans; we have created an economic system that cannot guarantee basic services like healthcare and food to all who need it, and we have created political systems that cannot create, agree on, and then implement reforms aimed at correcting the first two problems.

So, we are all going to die, it seems.

COVID-19 has come at a time of global political instability, which triggered inappropriate responses to what is, in fact, an economic crisis following the epic economic crash of 2008. This is a fact not fully internalised by the political class.

In Britain, as a case study, only Jeremy Corbyn, then leader of the Labour Party defeated in the 2019 election while standing on its most radical platform in over forty years, seems to have made this connection, even as many of his own colleagues in party leadership dismiss it.

COVID-19 has come at a time of global political instability, which triggered inappropriate responses to what is, in fact, an economic crisis following the epic economic crash of 2008.

“The political system is volatile because it is failing to generate stable support for the status quo following the financial crash of 2008,” he wrote in the UK’s Observer newspaper in December last year.

The general misery brought on by austerity policies, which a succession of governments since 2008 said were necessary to ignite the still elusive economic recovery, has left populations in the West exhausted, broke, insecure and unsettled.

Into this crisis, as is the way with any crisis, have jumped opportunists like Boris Johnson, a politician who has used popular dissatisfaction to first seize the leadership of his party, and then with that, the leadership of Britain, which remains – even in her present state – the fifth richest country in the world. The historical details of how that wealth was acquired form the basis of an enormous amount of politically exploitable cultural baggage among the English that Johnson used to his advantage.

It was, therefore, inevitable that some political voices would emerge to frame the crisis as a product of the impact of two significant changes in immigration that Britain has undergone in the last seventy years, which brought non-white-skinned people and also non-native English speakers to their shores in numbers never known before in their long history as a European power.

The first were people drafted in from Asia, Africa and the Caribbean empire as part of the reconstruction efforts following the 1939-1945 war.

The second group are broadly speaking citizens of the European Union (EU) countries, under whose rules they were entitled to free movement, settlement and work in any of the other member states.

But the EU really started life as a club for the original global powers clustered in the West of Europe that once had empires in Africa, Asia and the Americas, and profited massively from the trade in enslaved people and non-human goods, so as to become and remain some of the world’s wealthiest economies.

As the EU expanded eastwards to enroll member states previously occupied by the now defunct Eastern Bloc after it went out of business in 1989, it began taking in countries with little or no history of overseas empire-building. Their populations are basically poor, and many migrated westwards in search of better-paid work.

As public spending began to shrink after 2008, various politicians enticed the native British to put the blame on “too many immigrants” arriving on their shores, and converted this into political capital.

The goal is not to keep immigrants out as such, but to ensure their entry comes with as few rights as possible regarding work, welfare, health and housing laws, thus making them more exploitable and disposable afterwards. This also enables big business to induce the indigenous British people into working under conditions ever closer to those under which the migrants work, thus lowering not just wages, but entire living standards across the board.

So, while these countries may be rich, their populations are in fact not – a state of affairs previously historically masked by them being given access to state-provided free education and healthcare, as well as low-cost housing.

Those life-changing amenities have been systematically eroded over the last four decades, beginning with the Monetarist economic sea-change under Margaret Thatcher (1979-1990), but replaced with increasing access to cheap credit.

It is these conditions that leave the world’s richest countries unable to keep their populations safe and materially secure in the process of fighting the COVID-19 pandemic. The facts are now in the open: the average working Western citizen or resident does not earn enough to afford healthcare. And the economic system cannot afford to provide it to them, and to keep going itself.

The economic system has created mass precarity, which was being kept running by endless credit, and pointless circulation of goods and services. The lockdowns have put a halt to that, so those living in that way are seeing the Heath-Robinson jerry-built contraption called their lives fall apart.

COVID-19 lockdown has the effect principle of riding a bicycle: it is only possible to stay balanced if in motion, in the belief one is heading somewhere. It is only once you stop moving that you fall over.

The empire economy was premised on sourcing raw commodities very cheaply, and then processing them through the ruthless exploitation of labour back home.

The logic (for want of a better word) of Boris Johnson’s crew is to see how to recreate these dynamics where once again processing cheaply-sourced Third World commodities under conditions the ordinary people had struggled over one hundred years to abolish through working class activism under the leadership of the very Labour Party they have just rejected at the polls.

If the purpose of Western economics is to create stable, and comfortable societies, then clearly the West has failed.

There is a fundamental contradiction between the officially celebrated imperative to make profits, and the ability to deliver decent public health on demand. Public service and private profit do not mix.

In the case of a sudden widespread pandemic, equipment, hospital space, medicines, and medical personnel are all in short supply, and not easily scaled up, as this would disrupt the profit-based products and service supply system.

The governments of Africa should, in their wisdom, not allow matters to reach this point. If austerity has merely handicapped healthcare systems in the West, then it has devastated them in Africa. The strategy therefore seems to be to focus primarily on preventing ordinary people from becoming needful of direct intervention from our very fragile health services in the first place.

A capacity for violence against the population is one of the tools austerity left to our governments. And so anyone violating the curfews and movement bans is simply going to get beaten, arrested or worse.

“The way the day ends is not the way it dawns,” say the Baganda. So, given the growing conditions in the West, anyone who woke up there as a Western citizen may go to bed as a Third World subject – being beaten into living and dying with scarcity.