The Iron Grip of the International Monetary System: CFA Franc, Hyper-Imperial Economies and the Democratization of Money 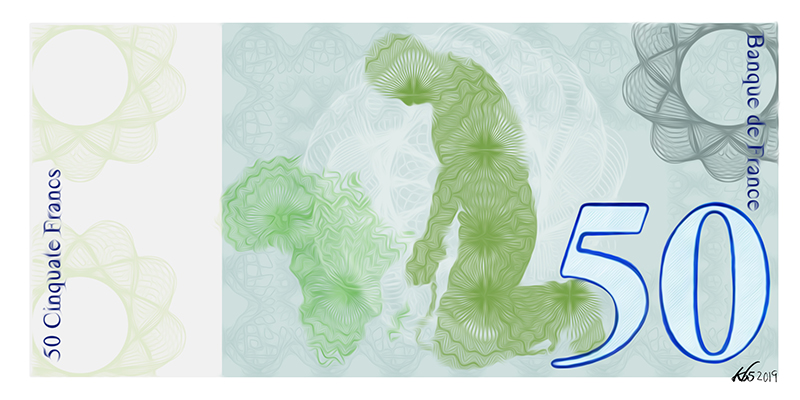 Despite being one of Africa’s greatest economists, Joseph Tchundjang Pouemi is little known outside Francophone intellectual circles. Writing in the 1970s, he offered a stinging rebuke of orthodox monetary theory and policy from an African perspective that remains relevant decades later. Especially powerful are his criticisms of the international monetary system and the CFA franc, the regional currency in West and Central Africa that has historically been pegged to the French currency—at first the franc, and now the euro.

Pouemi was born on November 13th, 1937, to a Bamiléké family in Bangoua, a village in western Cameroon. After obtaining his baccalaureate and working as a primary school teacher, Pouemi moved to France in 1960, where he studied law, mathematics, and economics at the University of Clermont-Ferrand. Pouemi then worked as a university professor and policy adviser in Cameroon and Cote d’Ivoire. In 1977, he joined the IMF but quit soon after, vehemently disagreeing with its policies. He returned to Cameroon and published his magnum opus, Money, Servitude, and Freedom, in 1980. The recently elected president of Cameroon, Paul Biya, appointed Pouemi head of the University of Douala in August 1983—then fired him a year later. On December 27th, 1984, Pouemi was found dead of an apparent suicide in a hotel room. Some of his friends and students argue he was poisoned by the Biya regime (which still governs Cameroon), while others believe that harassment by Biya’s cronies drove Pouemi to suicide.

Writing in the turbulent 1970s after the breakdown of the Bretton Woods regime of fixed exchange rates, Pouemi anticipated the three “fundamental flaws” with the international monetary “non-system”: one, using a national currency, the US dollar, as global currency; two, placing the burden of adjustment exclusively on deficit nations; and, three, the “inequity bias” of the foreign reserve system, which makes it a form of “reverse aid.” All three issues have been highlighted by the economic impact of the COVID-19 pandemic.

Long recognized as a problem, the challenges with using the US dollar as the world’s currency have once again become apparent. Low- and middle-income countries (which include essentially all African countries) have to deal with the vicissitudes of the global financial cycles emanating from the center of the global capitalist system. As the Federal Reserve raises interest rates to combat inflation by engineering a recession—because if borrowing costs rise, people have less money to spend and prices will decrease—they are increasing the debt burden of African governments that have variable-rate loans in US dollars. Already, the World Bank has warned of a looming debt crisis and the potential for another “lost decade” like the 1980s. Moreover, higher interest rates in the US lead to the depreciation of African currencies, making imports more expensive and leading to even higher food and oil prices across the continent.

Pouemi viewed the IMF’s attempt to create a global currency through the 1969 establishment of the special drawing rights (SDR) system as an inadequate response to the problems created by using the US dollar. The issuance of SDRs essentially drops money from the sky into the savings accounts of governments around the world. The IMF has only issued SDRs four times in its history, most recently in August 2021 in response to the COVID-19 pandemic. With African governments dealing with falling export earnings and the need to import greater amounts of personal protective equipment—and, eventually, vaccines—there was a clear need to bolster their savings, i.e., foreign reserves. The problem is that the current formula for allocating SDRs provides 60% of them to the richest countries—countries that do not need them, since they can and have borrowed in their own currencies. Of the new 456 billion SDR (approximately US$650 billion), the entire African continent received only 5% (about US$33 billion).

Decades ago, Pouemi had slammed SDRs as “arbitrary in three respects: the determination of their volume, their allocation and the calculation of their value.” Instead, Pouemi advocated for a truly global currency, one that could be issued by a global central bank in response to global recessions and that prioritized financing for the poorest countries. Such a reorientation of SDRs could provide a way of repaying African nations for colonialism and climate change.

Secondly, unable to get the financing they need, African governments with balance-of-payments deficits (when more money leaves a country than enters in a given year) have no choice but to shrink their economies. Pouemi strongly criticized the IMF, which he dubbed the “Instant Misery Fund” for applying the same “stereotypical, invariable remedies: reduce public expenditures, limit credit, do not subsidize nationalized enterprises” regardless of the source of a country’s deficits. Devaluing the currency is unlikely to work for small countries that are price takers in world markets and instead improves the trade balance by lowering domestic spending. The IMF has become “a veritable policeman to repress governments that attempt to offer their countries a minimum of welfare.” The current international monetary non-system then creates a global “deflationary bias,” since those countries with balance-of-payments deficits must reduce their spending, while those with large surpluses—like Germany, China, Japan, and the Netherlands—face little pressure to decrease their surpluses by spending more.

The third major issue with the current international monetary non-system is that developing countries have to accumulate foreign exchange reserves denominated in “hard” currencies like US dollars and euros, which means they are forced to transfer real resources to richer countries in return for financial assets—mere IOUs. Pouemi claimed that “if the international monetary system was not ‘rigged,’ reserves would be held as other goods like coffee or cocoa, gold for example. But the system is ‘rigged’; coffee reserves are quantified as dollars, pound sterling or non-convertible francs.” Instead, in the late 1970s, governments like that of Rwanda effectively lent coffee to the United States by using export earnings to purchase US treasury bills, whose real value was being quickly eroded by high inflation in the US. Hence, we live in a world where developing countries like China and Brazil lend money to rich governments like that of the US. As Pouemi explains: “The logic of the international monetary system wants the poor to lend to—what am I saying—give to the rich.”

Pouemi was also a harsh critic of the CFA franc, since maintaining the fixed exchange rate to the euro implies abandoning an autonomous monetary policy and the need to restrict commercial bank credit. Pouemi also argued that the potential benefits and costs of currency unions are different for rich and poor countries, and that therefore it is inappropriate to analyze African monetary unions through a European lens. His thoughts are especially relevant at a moment when the future of the CFA franc and West African monetary integration are up for debate.

In theory, by fixing the exchange rate to the euro, the two regional central banks that issue the CFA franc—the Banque centrale des états de l’Afrique de l’ouest (Central Bank of West African States) and the Banque centrale des états de l’Afrique centrale (Central Bank of Central African States)—have relinquished monetary policy autonomy. They have to mimic the European Central Bank’s policy rates instead of setting interest rates that reflect economic conditions in the CFA zone. The amount of CFA francs in circulation is also limited by the amount of foreign reserves each regional central bank holds in euros. Therefore, “the solidity of the CFA franc is based on restricting M [the money supply], a restriction not desired by the states, but one proceeding from the very architecture of the zone.” As a result, the economies of the CFA franc zone are starved of credit, especially farmers and small businesses, hindering growth and development. In Pouemi’s words, “There is no doubt, the CFA remains fundamentally a currency of the colonial type.”

When discussing the possibilities for a single currency for the Economic Community of West African States (ECOWAS), Pouemi stressed that the potential benefits and costs of currency union are different for rich and poor countries. “There is not only a difference of perception of the mechanisms of cooperation” between Europe and Africa, “there’s a difference of the conception of common life. Economic cooperation as it is conceived in the industrialized West is the Kennedy Round, North-South dialogue, the EEC, etc.—in other words, essentially ‘customs disarmament’ or common defense; armament is the rule, disarmament the exception.” In Africa, however, economic cooperation is a positive-sum game. Conventional economic theory argues against monetary integration among African countries, since they trade little with each other. But to Pouemi, the goal of monetary integration is precisely to get these countries to trade more with one another. He also questions the view that monetary integration should come last, following the same sequence as the European Union from free trade zone to customs union to common market and, finally, to currency union. “This view is not only imaginary, it is practically non-verified; we have seen examples. Theoretically, it is indefensible: a 10% decrease in tariffs could be … offset by a devaluation of 10%.”

Pouemi also dismissed arguments that Nigeria would dominate the proposed ECOWAS single currency as another example of the classic colonialist tactic of “divide and conquer.” While he acknowledged that “monetary union between unequal partners poses problems,” these are “only problems, open to solutions.” They do not make monetary integration unviable. Such integration need not limit sovereignty. In a regional or continental African monetary union, no “currency would be the reserve of others. Each country would have its own central bank, free to conduct the policy that best suits the directives judged necessary by the government. The only loss of sovereignty following such a union would be the respect of the collective balance. It would not be appropriated by anyone; it would be at the service of all. It would be, for that matter, less a loss of sovereignty than the collective discipline necessary to all communal life.”

Pouemi advocated for an African monetary union with fixed exchange rates between members, the pooling of foreign reserves, and a common unit of account—like the European Currency Unit that preceded the euro. He thought that the debate over whether the CFA franc is overvalued is misguided, since there is no a priori reason for its members to have the same exchange rate. Fixed but adjustable exchange rates—as in the Bretton Woods system or European Monetary System—would allow each nation greater monetary and exchange rate policy autonomy. Settling payments using a common unit of account instead of foreign exchange reserves would help economize on the latter. Moving toward the free movement of capital, goods and labor—as envisioned by the African Continental Free Trade Area—would help diffuse shocks through the monetary union. Finally, such a union would need to have a common policy on capital controls or at least collective supervision of international capital flows.

As Pouemi so eloquently lamented: “History will hold on to the fact that all of [Africa’s] children that have tried to make her respected have perished, one after the other, by African hands, without having the time to serve her.” We do not know what Pouemi could have accomplished had he had the time to serve Africa for longer. All we can do is heed his call that “in Africa, money needs to stop being the domain of a small number of ‘specialists’ pretending to be magicians.”