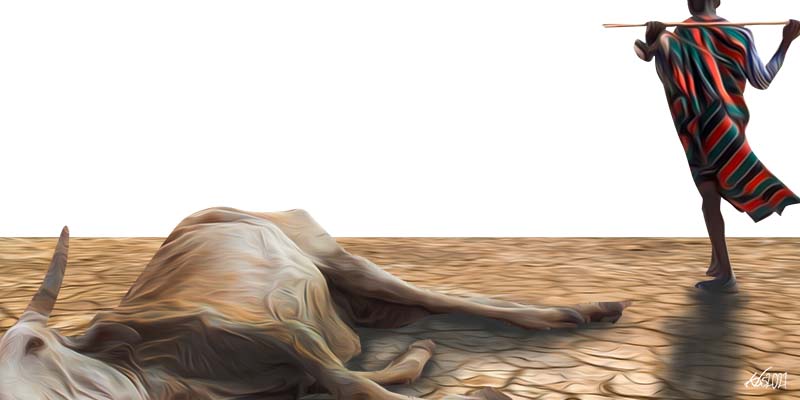 Even though Kenya accounts for less than 0.1 per cent of global emissions of greenhouse gases, pastoralist communities in the country have borne the brunt of the effects of climate change, facing increasingly frequent droughts every two years.

Drought disproportionately affects women and girls in northern Kenya. They spend much of their time looking for water, walking long distances to reach boreholes where they queue at water kiosks, competing for the precious commodity with large numbers of livestock. Mama Amina Mohamed, a 30-year-old who lives in Hadado, says, “My tedious routine is fetching water for household use for the 10 weak goats at home. I come here four times during the day.”

Asha Ali is 32 years old and a new mother. She lives with her family in Abaq Mathobe in Wajir West, 30 kilometres away from Wajir County headquarters. Asha gave birth on the 1st of November this year at home in her village which is not accessible by road, leaving her and her community without access to an ambulance service or emergency health services.

With the ongoing drought, there was no water available and so after giving birth, Asha Ali and her newborn baby were cleaned with coarse sand. Like thousands of other pregnant and lactating mothers in the northern counties that have been affected by the recent drought, Asha Ali was also severely malnourished. Due to existing gender disparities caused by illiteracy, poverty and traditional customs and beliefs, pastoralist women and girls tend to experience higher food insecurity and malnutrition in the northern counties.

As the drought ravaged the region, the task of moving the household and the weak livestock in search of pasture and water fell to the women. Thirty-five-year old Mama Fatuma Abey moved with her 12 children and her livestock from Welgaras, a conflict-prone area on the border between Wajir West sub-county and Isiolo, to Arbajahan. She and her children walked over 15 kilometres, spending two days on the road with no water and no food, fearful of being attacked by bandits along the way. The two donkeys that she had been using to carry her children died on the journey.

The family arrived in Arbajahan extenuated by hunger and fatigue and community elders helped to mobilise resources to come to their assistance. But Arbajahan is no better than Welgaras; women and girls are afraid to fetch firewood in the bush for fear of being raped and are forced to buy firewood for cooking.

Pastoralist women and girls tend to experience higher food insecurity and malnutrition in the northern counties.

Pastoralist women find that with drought their family responsibilities increase. The job of fetching weak livestock left behind in the old homestead falls to them; they must go back and forth, ferrying the weakened livestock on donkey carts, and must somehow find the means to feed the animals. Without pasture, the same grain that feeds their families is also used to feed the weak animals, further straining the household budget. To cope, the women skip meals, making do with a meal a day and sometimes none at all.

Drought also forces girls out of school. To help ease the burden at home, they forfeit their education for work as house-helps in urban areas such as Wajir town, sending their monthly earnings back home to support the mothers they have left behind.

The Integrated Food Security Phase Classification for Acute Malnutrition (IPC-AMN) and Acute Food Insecurity analyses for August to November 2021 projected that “an estimated 652,960 children aged between 6 and 59 months and 96,480 pregnant and lactating mothers [would] required treatment for acute malnutrition”. The nutrition situation was found to be critical (IPC-AMN Phase 4) in Garissa, Wajir, Mandera, Samburu, Turkana, North Horr and Laisamis sub-counties.

Wajir West was the county’s worst affected region and the children were the most affected. The proportion of children below the age of five years that were at risk of severe malnutrition had surpassed the emergency 15 per cent threshold (very high). In Wajir east, west  and south, the number of children under five years that were at risk of acute malnutrition had increased to 50 per cent in November 2021 due to reduced milk consumption. Milk production at the household level was affected by lack of pasture, distance to water sources, and the deteriorating condition of the livestock.

The climate crisis has led to dwindling resources and this is having an impact on the security situation in the northern counties. It has triggered conflicts between the communities of Hadado and Merti sub-counties leading to the deaths of more than 20 people in the last two years alone. Women and girls in these conflict-prone areas face more violence and insecurity and as the drought deteriorated, more women and girls were at risk of being killed, assaulted, and violated. Women and girls have also been displaced by climate change-induced conflicts and threats.

At the peak of the drought in October 2021, Abdullahi Mohamed, a community leader in Hadado, expressed the fears of the community. “If the rains fail in November and December, we are facing death as a result of no food and water. We are already too weak, I don’t know how many children and women can make it till it rains especially outside the inaccessible rural areas. We fear for our lives.”

Incidences of human-wildlife conflict due to severe drought also increased, especially in Wajir North, Balambala, and Ijara, where warthogs and monkeys were walking into people’s houses looking for food and water.

Without pasture, the same grain that feeds their families is also used to feed the weak animals.

President Uhuru Kenyatta declared the drought a national disaster on 8 September 2021 and instructed the National Treasury and the Ministry of Interior and Coordination of National Government to spearhead government efforts to assist the effected communities including with water and relief food distribution as well as livestock uptake. The central government subsequently allocated KSh2 billion for drought mitigation measures in 10 northern counties including Wajir, Garissa, Mandera, and Turkana.

On 4 November 2021, the national government launched a food aid programme with the government spokesman, Col. (Rtd.) Cyrus Oguna, flagging off food relief for drought mitigation that included 6,000 bags of rice and 12 000 bags beans to 10 locations in Wajir East. Each location received 50 and 17 bags of rice and beans. The Wajir County Government’s allocation of KSh180 million to special programmes was used to purchase emergency livestock feeds and food aid to save lives and livelihoods at the sub-county level. This was not nearly enough according to humanitarian organizations operating in Wajir, because the county has more than 781,000 people and more than half of the population were facing acute food Insecurity and acute severe malnutrition.

The primary water sources for human and livestock use across the county are boreholes, shallow wells, and water trucking. And even though it is unsustainable and very expensive, as the drought conditions persisted, there was a significant upsurge in the number of centres and institutions depending on water trucking as their primary source of water.

All the water pans had entirely dried up, putting a strain on the twelve strategic boreholes in the sub-counties and leading to increasingly frequent breakdowns due to high concentrations of people and livestock. The 2021 budget allocation of KSh837 million for the water department was spent entirely on rehabilitating boreholes.

As the drought conditions persisted, there was a significant upsurge in the number of centres and institutions depending on water trucking as their primary source of water.

The county governments in northern Kenya are being forced to reallocate development resources to address climate-induced emergencies, even though they are poorly equipped to respond effectively to droughts and to build the pastoralist communities’ resilience and ability to bounce back better. The pastoralist communities have lost billions in the recent drought, and they must start rebuilding again from scratch since this is the only way of life they know and understand.

But indigenous and pastoralist women are the most marginalized and most vulnerable to the climate crisis. They are poorly represented at the decision-making levels in the counties and with little power and influence, they are not involved in contributing to climate change policies and decisions even though they rely mainly on natural resources for their livelihoods.

According to a government report sent to the UN Framework Convention on Climate change, Kenya currently needs over US$62 billion to adapt to the crisis in the ASAL regions over the next 10 years. With the pastoralist way of life now threatened by severe cyclic droughts, there is an urgent need to strengthen the role of indigenous pastoralist women as change agents in climate change adaptation and mitigation since they are the most affected by cyclical droughts.

The long awaited rains finally came in early December 2021. The water pans have filled up, the grass has grown back and with the availability of water and pasture, the condition of the surviving livestock has improved. But until when will the water and pasture last?

The short-term drought mitigation strategies applied during every period of drought are not effective. There is need to develop a long-term strategy to strengthen the capacities of the northern counties to respond to the increasingly frequent droughts. The northern counties should invest in livelihood diversification, rangeland management, lengthening water availability and sustainable peace for the areas susceptible to resource-based conflicts.