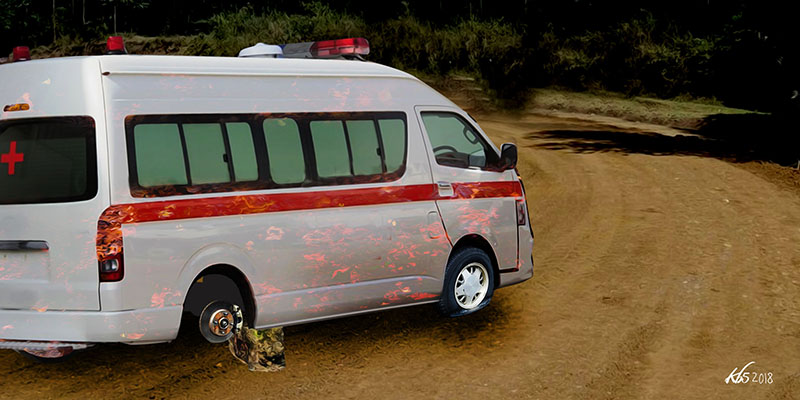 Two obscure companies linked to Kitui South MP Rachael Kaki Nyamai were paid at least KSh24.2 million to deliver medical supplies under single-source agreements at the time the MP was chair of the National Assembly’s Health Committee, an investigation by Africa Uncensored and The Elephant has uncovered.

One of the companies was also awarded a mysterious Ksh 4.3 billion agreement to supply 8 million bottles of hand sanitizer, according to the government’s procurement system.

The contracts were awarded in 2015 as authorities moved to contain the threat from the Ebola outbreak that was ravaging West Africa and threatening to spread across the continent as well as from flooding related to the El-Nino weather phenomenon.

The investigation found that between 2014 and 2016, the Ministry of Health handed out hundreds of questionable non-compete tenders related to impending disasters, with a total value of KSh176 billion including three no-bid contracts to two firms, Tira Southshore Holdings Limited and Ameken Minewest Company Limited, linked to Mrs Nyamai, whose committee oversaw the ministry’s funding – a clear conflict of interest. 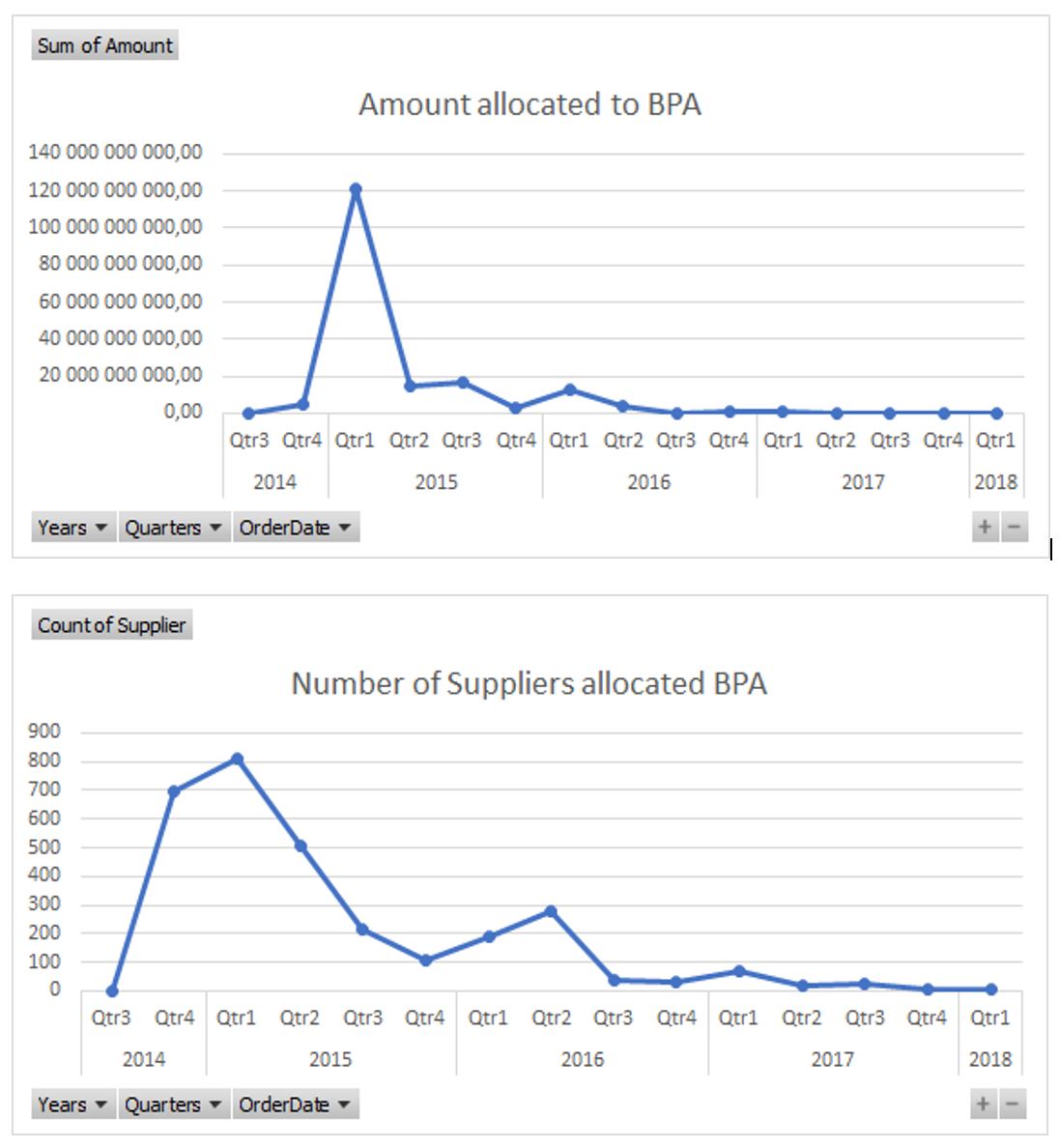 Although authorities have since scrutinized some of the suspicious contracts and misappropriated health funds, the investigation revealed a handful of contracts that were not made public, nor questioned by the health committee.

Mrs Nyamai declined to comment for the story.Nyamai has been accused by fellow members of parliament of thwarting an investigation of a separate alleged fraud. In 2016, a leaked internal audit report accused the Ministry of Health — colloquially referred to for its location at Afya House — of misappropriating funds in excess of nearly $60 million during the 2015/2016 financial year. Media stories described unauthorized suppliers, fraudulent transactions, and duplicate payments, citing the leaked document.

Members of the National Assembly’s Health Committee threatened to investigate by bringing the suppliers in for questioning, and then accused Nyamai, the committee chairperson, of blocking their probe. Members of the committee signed a petition calling for the removal of Nyamai and her deputy, but the petition reportedly went missing. Nyamai now heads the National Assembly’s Committee on Lands.Transactions for companies owned by Mrs Nyamai’s relatives were among 25,727 leaked procurement records reviewed by reporters from Africa Uncensored, Finance Uncovered, The Elephant, and OCCRP. The data includes transactions by eight government agencies between August 2014 and January 2018, and reveals both questionable contracts as well as problems that continue to plague the government’s accounting tool, IFMIS.

The Integrated Financial Management Information System was adopted to improve efficiency and accountability. Instead, it has been used to fast-track corruption.Hand sanitizer was an important tool in fighting transmission of Ebola, according to a WHO health expert. In one transaction, the Ministry of Health paid Sh5.4 million for “the supply of Ebola reagents for hand sanitizer” to a company owned by a niece of the MP who chaired the parliamentary health committee. However, it’s unclear what Ebola reagents, which are meant for Ebola testing, have to do with hand sanitizer. Kenya’s Ministry of Health made 84 other transactions to various vendors during this period, earmarked specifically for Ebola-related spending. These included:

Tira Southshore Holdings Limited and Ameken Minewest Company Limited, appear to have no history of dealing in hygiene or medical supplies. Yet they were awarded three blanket purchase agreements, which are usually reserved for trusted vendors who provide recurring supplies such as newspapers and tea, or services such as office cleaning.

“A blanket agreement is something which should be exceptional, in my view,” says former Auditor-General, Edward Ouko.

But the leaked data show more than 2,000 such agreements, marked as approved by the heads of procurement in various ministries. About KSh176 billion (about $1.7 billion) was committed under such contracts over 42 months.

“Any other method of procurement, there must be competition. And in this one there is no competition,” explained a procurement officer, who spoke generally about blanket purchase agreements on background. “You have avoided sourcing.”

The Ministry of Health did not respond to detailed questions, while Mrs Nyamai declined to comment on the contracts in question.

Procurement experts say blanket purchase agreements are used in Kenya to short-circuit the competitive process. A ministry’s head of procurement can request authority from the National Treasury to create blanket agreements for certain vendors. Those companies can then be asked by procurement employees to deliver supplies and services without competing for a tender.

Once in the system, these single-source contracts are prone to corruption, as orders and payments can simply be made without the detailed documentation required under standard procurements. With limited time and resources, government auditors say they struggle especially with reconciling purchases made under blanket agreements.The agreements were almost always followed by standard purchase orders that indicated the same vendor and the same amount which is unusual and raises fears of duplication. Some of these transactions were generated days or weeks after the blanket agreements, many with missing or mismatched explanations. It’s unclear whether any of these actually constituted duplicate payments.

Auditors say both the amounts and the timing of such payments are suspicious because blanket agreements should be paid in installments.

“It could well be a duplicate, using the same information, to get through the process. Because you make a blanket [agreement], then the intention is to do duplicates, so that it can pass through the cash payee phase several times without delivering more,” said Ouko upon reviewing some of the transactions for Tira Southshore. This weakness makes the IFMIS system prone to abuse, he added.

In addition, a KSh4 billion contract for hand sanitizer between the Health Ministry’s Preventive and Promotive Health Department and Tira Southshore was approved as a blanket purchase agreement in April 2015. The following month, a standard purchase order was generated for the same amount but without a description of services — this transaction is marked in the system as incomplete. A third transaction — this one for 0 shillings — was generated 10 days later by the same procurement employee, using the original order description: “please supply hand sanitizers 5oomls as per contract Moh/dpphs/dsru/008/14-15-MTC/17/14-15(min.no.6).

Reporters were unable to confirm whether KSh4 billion was paid by the ministry. The leaked data doesn’t include payment disbursement details, and the MOH has not responded to requests for information.

“I can assure you there’s no 4 billion, not even 1 billion. Not even 10 million that I have ever done, that has ever gone through Tira’s account, through that bank account,” said the co-owner of the company, Abigael Mukeli. She insisted that Tira Southshore never had a contract to deliver hand sanitizer, but declined to answer specific questions. It is unclear how a company without a contract would appear as a vendor in IFMIS, alongside contract details.

It is possible that payments could end up in bank accounts other than the ones associated with the supplier. That is because IFMIS also allowed for the creation of duplicate suppliers, according to a 2016 audit of the procurement system. That audit found almost 50 cases of duplication of the same vendor.

They also found such blatant security vulnerabilities as ghost and duplicate login IDs, deactivated requirements for password resets, and remote access for some procurement employees. 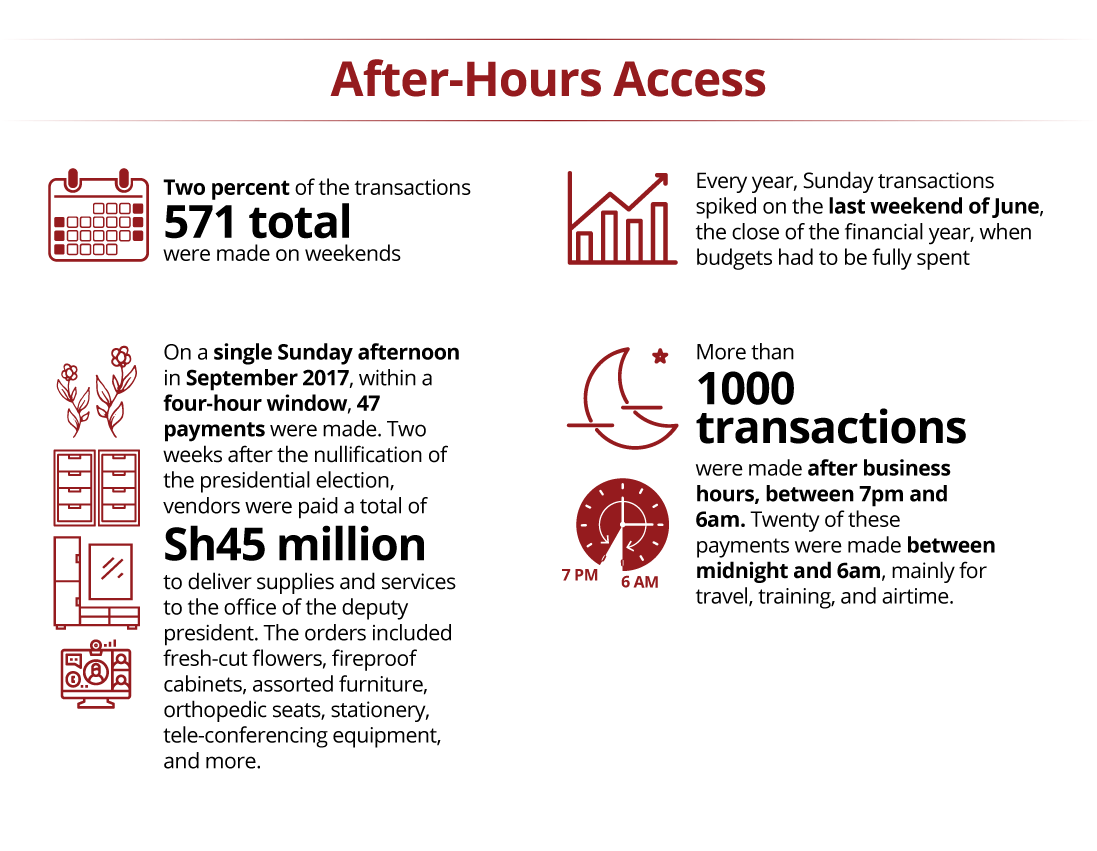 IFMIS was promoted as a solution for a faster procurement process and more transparent management of public funds. But the way the system was installed and used in Kenya compromised its extolled safeguards, according to auditors.

The former head of the internal audit unit at the health ministry, Bernard Muchere, confirmed in an interview that IFMIS can be manipulated.

Ms Mukeli, the co-owner of Tira Southshore and Ameken Minewest, is the niece of Mrs Nyamai, according to local sources and social media investigation, although she denied the relationship to reporters. According to her LinkedIn profile, Ms Mukeli works at Kenya Medical Supplies Agency, a medical logistics agency under the Ministry of Health, now embroiled in a COVID procurement scandal.

Ms Mukeli’s mother, who is the MP’s elder sister, co-owns Icpher Consultants Company Ltd., which shares a post office box with Tira Southshore and Mematira Holdings Limited, which was opened in 2018, is co-owned by Mrs Nyamai’s husband and daughter, and is currently the majority shareholder of Ameken Minewest. Documents also show that a company called Icpher Consultants was originally registered to the MP, who was listed as the beneficial owner.

Co-owner of Tira Southshore Holdings Limited, Abigael Mukeli, described the company to reporters as a health consulting firm. However Tira Southshore also holds an active exploration license for the industrial mining in a 27-square-kilometer area in Kitui County, including in the restricted South Kitui National Reserve. According to government records, the application for mining limestone in Mutomo sub-county — Nyamai’s hometown — was initiated in 2015 and granted in 2018.

Mukeli is also a minority owner of Ameken Minewest Company Limited, which also holds an active mining license in Mutomo sub-county of Kitui, in an area covering 135.5 square kilometers. Government records show that the application for the mining of limestone, magnesite, and manganese was initiated in 2015 and granted in 2018. Two weeks after the license was granted, Mematira Holdings Limited was incorporated, with Nyamai’s husband and daughter as directors. Today, Mematira Holdings is the majority shareholder of Ameken Minewest, which is now in the process of obtaining another mining license in Kitui County.

According to public documents, Ameken also dabbles in road works and the transport of liquefied petroleum gas. And it’s been named by the Directorate of Criminal Investigations in a fuel fraud scheme.Yet another company, Wet Blue Proprietors Logistics Ltd., shares a phone number with Tira Southshore and another post office box with Icpher Consultants Company Ltd., according to a Kenya National Highway Authority list of pre-qualified vendors. 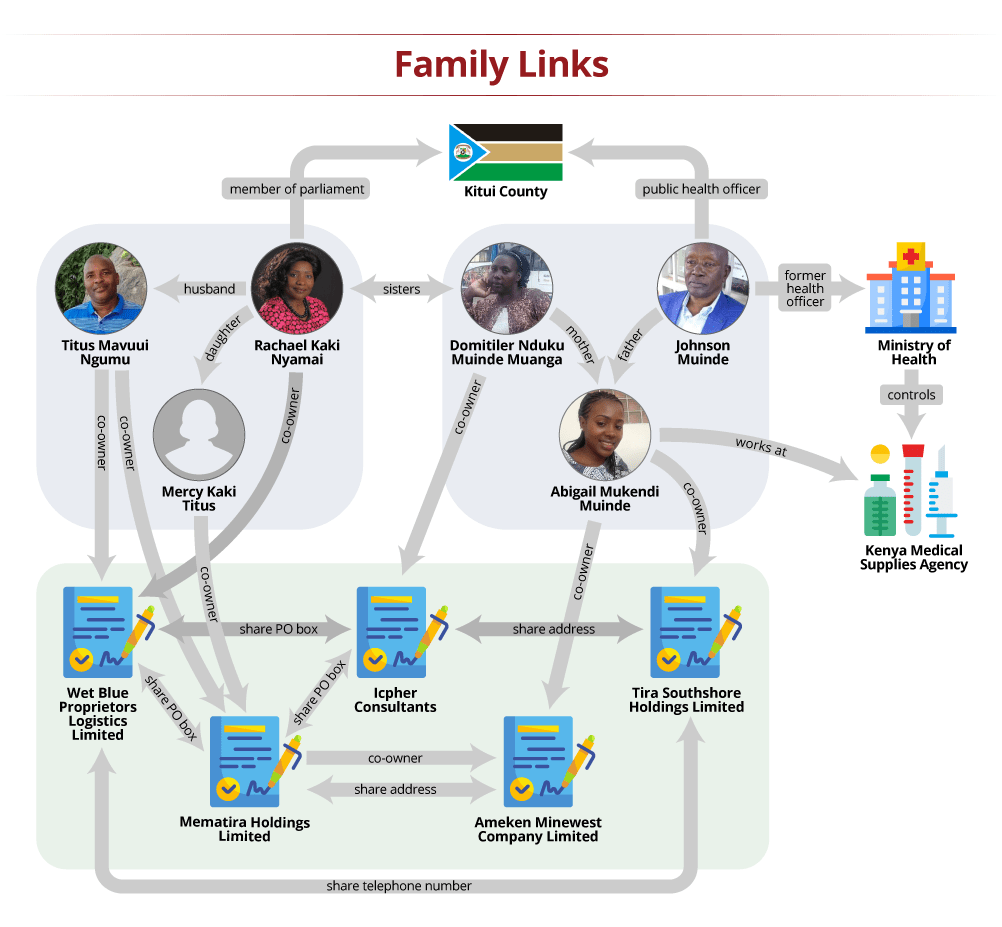 Mrs Nyamai and her husband co-own Wet Blue. The consulting company was opened in 2010, the same year that the lawmaker completed her PhD work in HIV/AIDS education in Denmark.

Wet Blue was licenced in 2014 as a dam contractor and supplier of water, sewerage, irrigation and electromechanical works. It’s also listed by KENHA as a vetted consultant for HIV/AIDS mitigation services, together with Icpher Consultants.

It is unclear why these companies are qualified to deliver all these services simultaneously.

“Shell companies receiving contracts in the public sector in Kenya have enabled corruption, fraud and tax evasion in the country. They are literally special purpose vehicles to conduct ‘heists’ and with no track record to deliver the public goods, works or services procured,” said Sheila Masinde, executive director of Transparency International-Kenya.

Both MOH and Ms Mukeli refused to confirm whether the ordered supplies were delivered.

Mr Agoi is an ANC Party MP for Sabatia Constituency in Vihiga County, and was on the same Health Committee as Mrs Nyamai, a Jubilee Party legislator. Mr Sila is a philanthropist who is campaigning for the Kitui County senate seat in the 2022 election.

Juliet Atellah at The Elephant and Finance Uncovered in the UK contributed reporting.