The Fight for the Catholic Soul: Will Pope Francis Prevail Over the Ultra-Conservatives? 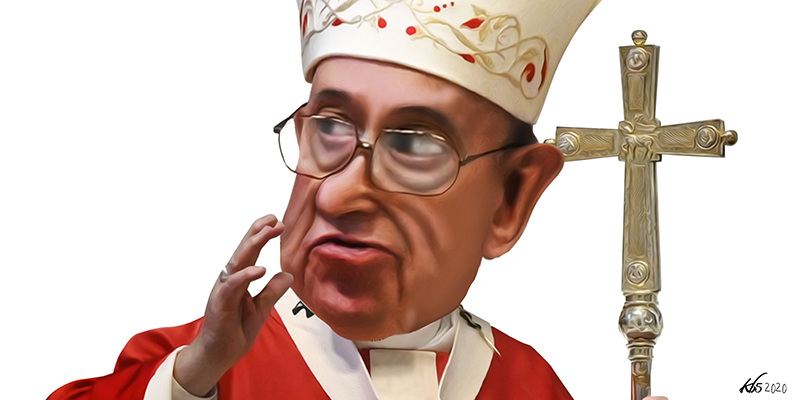 According to the Annuarium Statisticum Ecclesiae 2018 released by the Bureau of Statistics of the Holy See in March 2020, the latest official dataset on the growth of the Catholic Church in terms of believers and clergymen, almost 18 per cent of the world is baptized Catholic, 1.35 billion people. However, vocations are declining—the number of priests dropped 8 per cent between 2013 and 2018.

Already in 2013, years before the COVID-19 crisis was to hit the world, times were dark for the Catholic Church and by the time Cardinal Jorge Bergoglio was declared Pope on 13 March of that year, the Church as an establishment had been embroiled in a vast corruption scandal since January 2012. Vatileaks was a flood of classified documents from the Holy See showing irreconcilable internal divisions, the alleged existence of a “gay lobby” and the mismanagement of the Istituto per le Opere di Religione (IOR), the Vatican bank. The revelations heightened tensions between the more progressive wing of the clergy and the conservative wing, incarnated by the then Pope, Benedict XVI. The Vatileaks bombshell was among the factors that forced Benedict XVI to quit. The event was momentous: the Pope stepping down was only the second time in the millennial history of the Church (there are six cases in the past but in only one of them are historians sure that the renunciation was voluntary).

The Vatican needed root-and-branch reforms and among the possible candidates to succeed Benedict XVI, Cardinal Jorge Bergoglio best fit the role of the revolutionary. Cardinal Bergoglio was born in Buenos Aires on 17 December 1936 to a family of Italian immigrants. His father worked as an accountant for the national railways while his mother took care of Bergoglio and his five siblings. Bergoglio had a girlfriend, Amalia, when he was 13. He told her that he would become a priest if she did not marry him. When her father found out about their relationship, he forbade Amalia to continue dating him and the two never saw each other again. Bergoglio kept his word and became a Jesuit priest at 33.

Bergoglio graduated in philosophy in 1963 and then in theology in 1970. He taught psychology and literature at a college in Santa Fè and then in Buenos Aires, living through the worst of the Argentinian dictatorship between 1976 and 1983.

Between 2006 to 2010, Horacio Verbitsky, a left-wing Argentinian investigative journalist, wrote a series of books about the phenomenon of the desaparecidos, the people who had gone missing because of the kidnappings and the extrajudicial killings committed by the army. Verbitsky wrongly claimed that Bergoglio had helped the military junta to kidnap two priests but these claims were debunked by several journalists, including Italian Nello Scavo. According to other more reliable sources, the truth is exactly the opposite; Bergoglio was among the clergymen who saved and hid dozens of people to avoid the renditions. Although Bergoglio hadn’t publicly spoken against the regime, he was trying to operate against it, even asking for the liberation of the two priests Verbitsky claimed he had helped to kidnap.

Bergoglio has always engaged in politics, even more so after he was appointed Archbishop of Buenos Aires by John Paul II, denouncing the effects of ultra-liberalism and the policies of the International Monetary Fund on the poor. A visit to a hospital full of AIDS patients during a celebration in 2001 attracted criticism but Bergoglio has always wanted to show his empathy for the marginalised. Charity, helping the poor, coexistence between the clergy and ordinary believers, and evangelisation for all, were the main concerns that inspired his actions as Archbishop of Buenos Aires.

With his very first speech as Pope, the winds of change began to blow through the Vatican. Addressing the crowd in the Piazza San Pietro, Pope Francis said, “And now, we take up this journey of the Church of Rome which presides in charity over all the Churches. A journey of fraternity, of love, of trust among us. Let us always pray for one another. Let us pray for the whole world, that there may be a great spirit of fraternity.” In those words could be heard the echo of his biography.

The fight inside the Church

Despite the gulf between them in terms of theological doctrine, Pope Francis and Pope Benedict XVI — two antipodean souls of the Church — enjoyed a fraternal friendship, brilliantly portrayed in the movie The two Popes produced by Netflix and directed by Fernando Meirelles. Ratzinger is more a book lover than a people lover, a German who harbours a traditional vision of the role of the Pope, a student of theology who embraces a traditional vision of the power of God and is reluctant to change. Ratzinger never craved power; he merely wanted to keep the House of God clean. But he failed, not least because of the greed of his inner circle, as exposed by Vatileaks in the 2015 revelations.

Bergoglio’s friendship with Ratzinger has not been sufficient to shield him from being repeatedly labelled an enemy of the Catholics by the conservatives within the Church. The first time was on 3 October 2013, almost seven months after his election. A ship capsized near Lampedusa, one of the Italian islands closest to the African coastline, causing the death of 368 people. The tragedy is etched in the memory of European citizens for two reasons: the scale of the tragedy and the reaction of Pope Francis. He made a remarkable speech following that event, saying, “There is one word which comes up in my mind: Shame. This is a shame.” This is just one of the many occasions when the Pope has stood with the migrants and their quest for a better life which pushes them to put their lives at risk trying to cross the Mediterranean Sea.

In 2015 Steve Bannon, a former advisor of Donald Trump during his 2016 presidential campaign, referred to Pope Francis as a “globalist” in the American edition of the Spectator magazine. For politicians like Bannon and Trump who are the latest incarnation of the far right, globalism is the main enemy, not just in the United States but also in Europe. They aim to preserve “traditional values” such as heterosexual marriage, to “protect” national borders against “mass migration” and to strike back against the “political elites” they accuse of ruling countries without popular support. Among the members of these “political elites” are NGOs, politicians and intellectuals. And Pope Francis.

From the beginning of his career, Steve Bannon has been connected with Cardinal Raymond Leo Burke, one of the most influential proponents of traditionalism within the Catholic Church. An American, Burke is the honorary chairman of the Dignitatis Humanae Institute, a foundation that supports traditional values established in Trisulti, close to Rome, by Steve Bannon and some of his associates. A former archbishop of Saint Louis in the US, Burke was removed from the Congregation for Bishops, an important Vatican committee, in December 2013. The New York Times defines him as the “de facto leader of the conservative opposition to Pope Francis in the Roman Catholic Church”, a claim he has dismissed severally. Still, at least from a symbolic point of view, he is the opposite of Pope Francis.

The escalation of the opposition against the Pope reached a paroxysm during Easter week in 2019 when a group of prominent academics and clergymen signed an open letter demanding an investigation into Pope Francis for the canonical crime of heresy. “We are addressing this letter to you for two reasons: first, to accuse Pope Francis of the canonical delict of heresy, and second, to request that you take the steps necessary to deal with the grave situation of a heretical pope. We take this measure as a last resort to respond to the accumulating harm caused by Pope Francis’s words and actions over several years, which have given rise to one of the worst crises in the history of the Catholic Church,” the Open Letter to the Bishops states.

The reason for this wave of anger was the Exhortation Amoris laetitia, literally the “joy of love”, a wrap-up of two synods about the family which took place in 2015 and 2016. Family is one of the buzzwords used by the identitarians to gain new votes. Pope Francis tried to address complex topics, from the “gender theory” to divorce and although he is completely aligned with the traditional vision of the Church, the reaction was strong. Pope Francis was criticised by the signatories for his position regarding people suspected of sexual crimes. They claimed that the Pope “rejects Catholic teaching on marriage, sexual activity, and on the moral law in general, even when these clerics personally violate the moral and civil law in horrendous ways”. The accusations escalated when in October 2020 he endorsed civil marriage between homosexual couples. “Once again,” Cardinal Burke declared, “the Pope is speaking for himself, not for the Church.”

The Pope faced similar opposition when in 2015 he published Laudato sii, “Praise be to you”, an encyclical addressing climate change and pollution as global issues. “The climate is a common good, belonging to all and meant for all,” wrote the Pope. “Humanity is called to recognize the need for changes of lifestyle, production and consumption, in order to combat this warming or at least the human causes which produce or aggravate it,” he added. Many within the conservative wing of the Catholic Church are climate change deniers.

The fight for Catholic souls is now purely political.