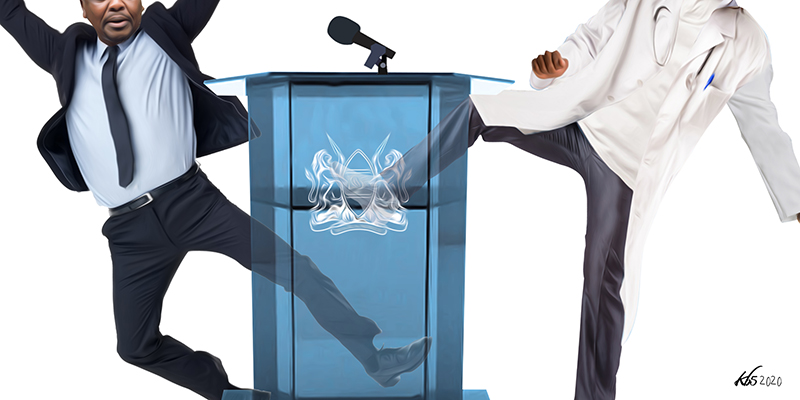 As I was starting to write this article, the British Prime Minister, Boris Johnson, a victim of the coronavirus pandemic that is sweeping the globe, had just left the intensive care unit of a London hospital after fighting for his life. Just a few weeks earlier, he had been gleefully shaking hands at events, including one at a hospital treating coronavirus patients. That may seem, in hindsight, to be incredibly reckless behaviour on his part, which ignored the scientific advice we were all getting about the need for social distancing. Similarly, many may see the sluggish UK response to the threat posed by the virus as flying in the face of science.

However, a Reuters investigation suggests the opposite. In fact, Johnson may have been guilty of too uncritically following the advice of scientists. It suggests that when future historians look back at his handling of the crisis, “the criticism levelled at the prime minister may be that, rather than ignoring the advice of his scientific advisers, he failed to question their assumptions”.

Should we be listening to the doctors? It may seem like a foolish question to ask in the midst of a deadly global pandemic that had infected over 3 million people and killed more than 200,000 by the end of April. In such circumstances, heeding the advice of the medical establishment seems to be the most sensible thing to do.

However, as the disruption of national and global commerce and travel demonstrates, the coronavirus does not just attack individuals; it poses a threat to entire social and economic systems built around mass personal interactions, be they markets or transport systems. And though medics may be adept at safeguarding and even curing our bodies, they are perhaps less so when it comes to societies. As Kenyan economist and outspoken public intellectual, Dr David Ndii, pointed out on Twitter, “Our medical/epidemic experts seem to understand pathogens/disease spread but they don’t seem to understand people/society. And that’s a problem.”

However, this has not stopped governments around the world from rolling out the high priests of science (medical doctors and epidemiology specialists) to lend legitimacy and credibility to the measures they are taking, in some cases reluctantly, to combat the virus. It is, after all, difficult for the ordinary citizen to argue with inevitability as presented by knowledgeable people who have spent their lives drinking from the fountain of wisdom and who now come armed with charts and graphs and statistics predicting a terrifying apocalypse if we do not obey.

Yet the question still should be asked whether it is desirable that science and scientists should be dictating government policy responses. One thing to keep in mind is that despite the appeals to it, science doesn’t actually tell us what to do; rather, scientists attempt to explain the linkages between variables, to predict what might happen if we decided on a particular course of action. As Therese Raphael explains, “The world of scientific modelers looks so neat — pristine sloping lines on two-dimensional axes that tickle our love of pattern recognition and cause-effect. Only, that’s deceptive; it simply masks all the uncertainty.”

Models are simplified representations of reality, and inasmuch as scientists may recommend a particular path, this recommendation is based on their interpretation of what the science is telling them about the options they have looked at, the assumptions they have made, and the variables they have decided to consider. As Dr Mark Nanyingi, an infectious diseases epidemiologist explains, “Models can help in forecasting where and when the diseases are likely to occur and what measures are needed to slow down the spread. This can guide future government policies for better preparedness and response to pandemics.”

One thing to keep in mind is that despite the appeals to it, science doesn’t actually tell us what to do. Rather, scientists attempt to explain the linkages between variables, to predict what might happen if we decided on a particular course of action.

Further, as the saying goes, to a man with a hammer, every problem looks like a nail. So different scientists will bring their various biases to their assessment of problems. While medics may privilege the need to do whatever it takes to arrest the disease, economists, on the other hand, may point out that harming the economy could create worse problems.

Even within the medical fraternity, one might be likely to find people who think that focusing on coronavirus while ignoring other diseases that kill many more people may be a mistake. As Tom Angier of the University of St Andrews points out, “There are significant disagreements between experts even within limited domains of expertise, and these disagreements are often themselves fundamentally political.” He adds that it would be naïve to expect politically neutral results. “The rule of experts would generate not expert rule, but a cacophony of conflicting views and interests.”

Asking whether we should listen to our doctors is not about questioning their capabilities and knowledge; it is about querying the role of science and scientists in democratic governance and decision-making. Few would argue that they have no role. But it is another thing altogether to claim that theirs are the only considerations. For one, when scientists speak, it is not just the science talking; they bring with them their biases, even prejudices, as exemplified by the recent suggestion by two French doctors that a potential coronavirus vaccine should be first tried out on Africans. As Prof W. Henry Lambright notes, “When scientists leave their labs to advocate position they may be behaving much like other interest groups, trying to influence public policy.”

More importantly, technocracy (rule by unelected skilled experts) or its cousin, epistocracy (rule by the knowledgeable) may not be a good idea. As David Runciman explained two years ago in an intriguing article for the Guardian, “Even qualified economists often haven’t a clue what’s best to do. What they know is how to operate a complex system that they have been instrumental in building – so long as it behaves the way it is meant to. Technocrats are the people who understand what’s best for the machine. But keeping the machine running might be the worst thing we could do. Technocrats won’t help with that question.” Substitute medics for economists and you begin to see the conundrum.

Asking whether we should listen to our doctors is not about questioning their capabilities and knowledge; it is about querying the role of science and scientists in democratic governance and decision-making.

The British response provides a telling example. In explaining why the UK government did not join the rush to impose a lockdown, Graham Medley of the London School of Hygiene and Tropical Medicine, who chairs a group of scientists advising the government on pandemic responses, told The Atlantic’s Ed Yong: “My problem with many countries’ strategies is that they haven’t thought beyond the next month. The U.K. is different.” The country would not be panicked into taking rash measures, such as closing down schools, “in a way that feels good but isn’t necessarily evidence-based”.

Waiting for the evidence to come in before making a decision may sound like a good plan in the academy, but in the real world, decisions often need to be taken in the absence of full information, and waiting can have catastrophic consequences, as was the case in Italy.

So who should determine what the best course of action is? In a democracy, this function is left to elected public officials who then answer to the electorate. But are politicians any better placed to make wiser decisions? Not necessarily. However, as Runciman argues, the advantage of democracy is assuming that no one has a monopoly on wisdom; it “protects us against getting stuck with truly bad ideas”, even when these are promoted by the most knowledgeable people on the planet.

Democracy is better thought of as system for limiting the harm that governments can do than as a route to generating the best possible decisions. “Rather than thinking of democracy as the least worst form of politics, we could think of it as the best when at its worst.” And such damage limitation is undoubtedly a virtue when poor decisions – such as choosing to wait – could lead to people dying in the streets. As Prof Rupert Read writes regarding the situation in the UK, “Make no mistake, it is government policy that has led to the dire situation we are now in.”

But democracy cannot function in the absence of information and transparency about the basis on which governments are making their decisions. In the case of the UK, Yong pointed out that the models and data that had influenced the government’s initial strategy hadn’t been published, much to the chagrin of many scientists. “If your models are not ready for public scrutiny, they shouldn’t be the basis of public policy,” one scientist told him. The same could be said of other countries, including Kenya, where Dr Nanyingi has decried the government’s reluctance to publish the information on which it is basing its directives. “The disease belongs to the people but data belongs to the government,” he wryly observed.

However, as Runciman argues, the advantage of democracy is assuming that no one has a monopoly on wisdom; it “protects us against getting stuck with truly bad ideas”, even when these are promoted by the most knowledgeable people on the planet.

Obviously, science and the advice of scientists matters. The advantages of governments pursuing policies that are based on evidence and the best and most accurate information available cannot be disputed. And listening to the science does not automatically mean shutting down society and the economy, as countries like Sweden and South Korea may be proving. Requiring politicians to reveal the data underlying their decisions can inoculate against the tendency of politicians to play to the gallery, taking actions that may be popular or make them look decisive but that may have little actual utility. However, it must be emphasised that this is not the same as saying that it is the scientists who should be setting public policy.

In the end, querying the role of science is not really about the competence of modern day medicine-men, but rather the accountability of politicians and public officials. The decisions that need to be taken must consider the scenarios presented by different cadres of scientists, as well as the various uncertainties in their models. They will need to take into account not just consequences but also values and the aspirations of society. They will inevitably involve painful trade-offs and compromises.

In short, these are political, not technical, decisions and will require human beings prepared to make them and to be accountable for them. They are not abstract science.