Uganda: Why Only Public Oversight Can Stem Corruption and Incompetence in the Public Service 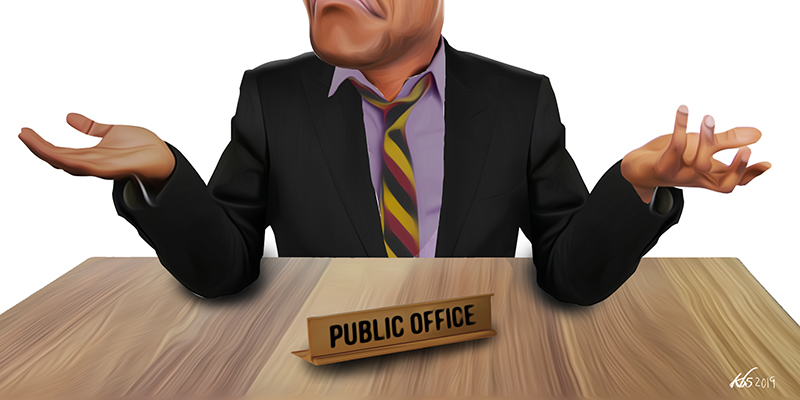 It is that time of the year when the Auditor General’s annual report, released at the end of December, is drip-fed to Ugandans, query by query. The majority of the population will only ever know headlines such as “Uganda’s Public Debt Worrying”. Along with the news that Uganda’s public debt has risen by 22 per cent, the latest report carried the first official confirmation that the country’s sovereignty has been put at risk by the terms and conditions of some loans. These two alarming pieces of information received minimal response from the public.

What did not make the news was that significant amounts of the petroleum fund set aside for infrastructure development is being used instead to fund the recurrent budget (wages, consumables, transport etc.) amounting to UGX.125.3 billion ($34,137,671).

Revenues receivable from oil developers amounting to UGX 12,877,415,932 ($3,508,073), have not been collected. A number of other entities have failed to collect monies due to them and it is possible the receivables have been diverted.

The debt to revenue ratio is now 54%, the highest in the region and projected to rise to 65% in 2020 when some loans expire. Historically, nothing above 40 per cent debt to revenue ratio has been sustainable. Interest payments as a percentage of revenue collection, at 17 per cent, are also above the accepted threshold of 15 per cent. The AG first flagged unsustainable interest payments in 2016 when they were still at 16 per cent of revenues.

The Youth Livelihood Programme attracted more attention than the debt situation, with its salacious details involving revolving loans being made to youth groups, 67 per cent of which do not exist. A small minority will find out from Twitter that 79,000 army veterans haven’t been paid their pension and gratuity arrears worth UGX 500 billion ($136,211,575) or that UGX 65.6 billion ($17,843,484) was released by the Treasury for pensions but was returned after the recipients could not be verified or were being deliberately frustrated by ministries, departments, agencies and local governments. (The latter is more likely. This writer was involved in arm-wrestling the Education Service Commission and the Ministry of Education for an elderly friend’s gratuity. A Ministry of Education official demanded an unspecified “share”; it was denied to him, and so the gratuity was not paid.)

The full report will come into its own with daily television coverage later in the year when the Parliament Accounts Committee (PAC) gets round to debating it. There will be further scrutiny if and when COSASE, Parliament’s committee on commissions, statutory authorities and state enterprises, debates its management. COSASE might spend some time trying to understand why out of the 11 public enterprises in which the government has invested UGX 70 billion ($19,067,642) only Kalangala Infrastucture Services is operational. KIS first came up for mention by the AG in 2016 when it was discovered that it had been paid UGX 16 billion ($4,358,994) to run two ferries between Ssesse Islands and the mainland while the nine other ferries countrywide were operated on a combined total of UGX 10 billion ($2,724,196). The AG pointed out that a new ferry can be acquired for UGX 14 billion ($3,813,865). KIS has never declared profits since the project began in 2012.

All except two of the government’s non-operational commercial enterprises are in the agricultural sector and were designed to transform smallholdings into commercially viable farms (See the State of the Nation Address 2018), fruit and sugar factories and tea factories and growers. 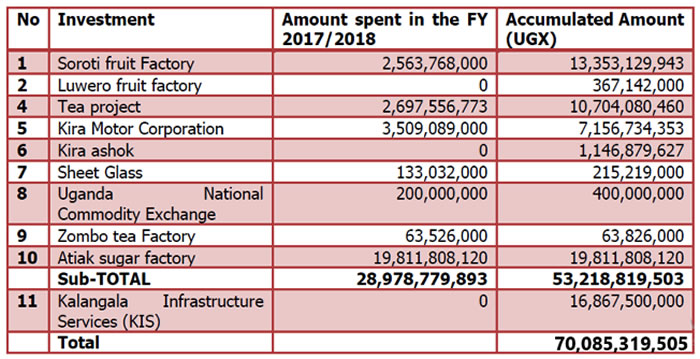 This should come as no surprise given that the AG had earlier warned against these investments made without strategic plans or feasibility studies;

Lack of guidelines for strategic investments

“The government, through the Uganda Development Corporation, is undertaking investments countrywide in the areas of fruit processing and helping others to set up industries in Soroti, Luwero, Kabale and Kisoro districts. These investments cumulatively amounted to UGX 26.6 billion ($7,246,598). However, I noted that there was no policy to guide the establishment of these investments.” The Auditor General’s report of 2016 also shows that some of the investments have been undertaken without feasibility studies on marketability and commercial viability.” (Auditor General, 2018)

The competence of parliament and the general public to oversee public expenditure is also in issue. Kira Motor Corporation (KMC), recently in the news for test-driving a car supposedly made in Uganda, was audited and is listed as non-operational in 2018.

It was only noticed when in February 2019 a parliamentary committee visited KMC and found that the plant does not exist. Where foundations and scaffolding worth UGX 15 billion ($4,087,095) had been expected, there was only bush. Like other presidential initiatives announced to fanfare and outside the NDP, KMC is being revealed as a scheme for gaining access to Treasury funds that have been embezzled.

Nugatory expenditure is a useful indicator of competence in the public service. The AG defines it as avoidable and therefore wasteful “expenditure that does not achieve any result”. In 2017 UGX 2.74 billion ($746,508) was wasted on “delayed settlements of obligations arising from contracts for construction services, court awards.” In 2018, the Ministries of Water and Education lost UGX 1.6 billion ($435,900) on “interest charges including on interest on delayed payments, litigation costs for wrongful termination of contracts and refund of embezzled funds”.

However, the details are no longer important and not many more can be taken in by an exhausted polity. It is more productive for Ugandans to focus on the underlying incompetence in public administration that gives rise to audit queries such as these and to devise means of increasing public oversight of the Treasury. Some audit queries arise out of incapacity but most mask corruption.

It was only noticed when in February 2019 a parliamentary committee visited KMC and found that the plant does not exist. Where foundations and scaffolding worth UGX 15 billion ($4,087,095) had been expected, there was only bush. Like other presidential initiatives announced to fanfare and outside the NDP, KMC is being revealed as a scheme for gaining access to Treasury funds that have been embezzled.

Take wetland management. It has been government policy for at least a decade to halt encroachment on wetlands. The reasons are both to prevent environmental degradation and to maintain access for communities that derive livelihoods from them. The Wetland Management Department has not updated the inventory of wetlands since 2000; they are neither demarcated nor gazetted. This omission is convenient for those who acquired illegal title in the wetlands in anticipation of the planned standard gauge railway and the compensation that would have to be paid for them being vacated. In 2017 the National Environment Management Authority announced that the titles were to be cancelled. In 2018, the AG found that the cancellation exercise was not funded and therefore did not take place.

The target of restoring 12 per cent of destroyed wetlands by 2020 is unlikely to be met. Degradation of the wetlands outpaces restoration, with only 0.3 per cent of the targeted restorations having been implemented.

Furthermore, it has been found that reclaiming wetlands as part of irrigation schemes has led to enclosure of the irrigated land and exclusion of the local populations dependent on them for their survival. Land management generally is in similar straits with two million hectares belonging to the police, prisons and Ministry of Agriculture encroached upon. At the time of writing a massive tract of wetland is being filled with earth on the Bombo Road – a highly visible highway leading north out of Kampala. The public is mystified.

Thirty-four per cent of ministries, departments and agencies (MDAs) and local governments are understaffed. The level in 2016 was more or less the same – 119 local governments were understaffed by over 40 per cent. “This affects service delivery as a majority of these are critical jobs like doctors, clinical officers, Professors, Commissioners.” (Auditor General). The most affected are public universities and local governments. Following[1] is a sector by sector list of audit findings for MDAs highlighting the understaffing and other difficulties they face.

Then there is the usual corruption, such as the case of six officials in Apac District receiving over UGX 2 billion ($544,883) without supporting documents; financial controls are still being overridden because the twenty-year-old IFMIS has still not been rolled out country-wide. Where it does operate, controls have been by-passed to allow UGX 369 billion ($100,531,084) in expenditure not related to the relevant budget line (up from 168 billion in 2016), unaccounted for expenditure of 21.7 billion ($5,912,119) and nugatory expenditure of 66.9 billion ($18,226,765). Undisclosed arrears, which may or may not be genuine, amount to UGX 377 billion ($102,707,560).

Overall responsibility must be ascribed to the top leadership of the public service, the planning departments of the Ministry of Finance, line ministries and local governments. Unfortunately, that is where the largest gaps exist between expected services and outcomes.

In 2016, a large number of MDAs failed to submit strategic plans “as a result most sector plans and targets are not aligned with the National Development Plan (NDP) and assessing service delivery and level of implementation of the NDP is difficult without service delivery standards and regular interviews.”

However, the details are no longer important and not many more can be taken in by an exhausted polity. It is more productive for Ugandans to focus on the underlying incompetence in public administration that gives rise to audit queries such as these and to devise means of increasing public oversight of the Treasury. Some audit queries arise out of incapacity but most mask corruption.

Low debt absorption is understandable now that it is clear that money is borrowed without plans. In 2016, UGX 18 trillion ($4,903,604,818) was committed but was not disbursed. The Treasury paid UGX 20 billion ($5,448,388) in wasted commitment fees for those loans. In 2018, the trend continued; municipal councils under the Uganda Support for Municipal Infrastructure Development failed to utilise UGX 95,006,243,857 ($25,881,547) while the project support unit did not utilize UGX 6,722,829,229 ($1,831,386). This occurred against the background of “various incomplete and abandoned works due to non-payment of contractors. Work on Mbarara-Nkenda and Tororo-Lira transmission lines was delayed for almost 8 years resulting into cancellation of the loan by the funder with an undisbursed loan amount of USD 6.5m”.

The same loan was audited in 2016 when the unabsorbed amount was UGX 94.783 billion. Officials at that time attributed the failure to a lack of specialised staff (understaffing), which in turn limited their capacity to procure specialised equipment, such as for land surveys.

A minor but interesting detail is that 115 properties under the management of the Departed Asian Custodian Board (DAPCB) have been repossessed by their former owners who were compensated for these properties in 1999. These properties may be lost to the State once the winding up of the DAPCB is complete.

Returning to the issue of an appropriate response to the Auditor General’s findings, the aggrieved have a number of options. The most promising would be to file class action suits for negligence and any losses consequent upon that, be they avoidable deaths in hospital or those caused by bad roads.

Where funds have been available and commitments made, the failure to transmit electricity for eight years and resulting loss of industrial capacity and simple comfort of the affected population is similarly actionable. Nugatory expenditure is actionable in its own right but various communities can demonstrate in lawsuits how it has adversely affected them and obtain compensation.

It is the right of affected populations to petition the Ombudsman, individual MPs, as well as COSASE. If they appear toothless, it may be because the public they represent has abdicated responsibility for the economy.