THE LAST HURRAH? Raila Odinga explains the reasons for ‘the handshake’ 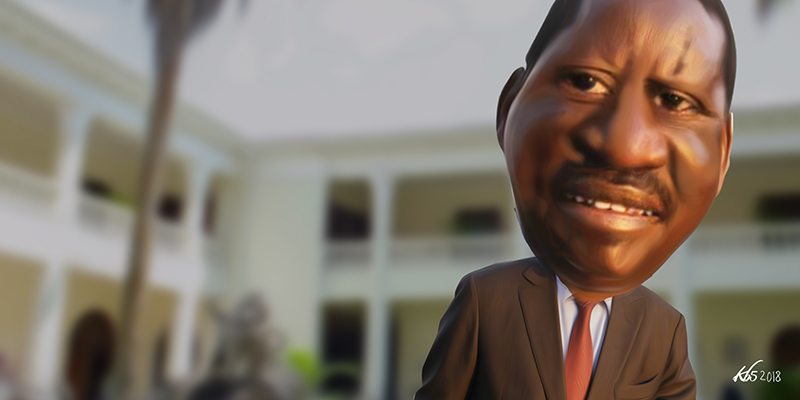 “Sometimes we wonder, is he protecting Kenyans from Uhuru, or Uhuru from Kenyans?”

Hours after my interview with Raila Odinga, I am sitting in the back of a taxi, talking politics with the driver, a long time “Baba” faithful, who makes the above statement with a slight tone of disappointment.

It is somewhat simplistic to reduce the politics of an entire country to two men; yet often in the case of Kenya this is the dominant narrative.

There is more to the politics and the systems. There are those who argue that their lives will not change regardless of who sits in State House. There are others who say that it is institutions, not individuals, which will take the country forward. Some say that the entire political circus is nothing but a show, distracting Kenyans from the everyday challenges that they face.

Despite all this, the actions of these two men – Raila Odinga and Uhuru Kenyatta – have an impact. Decades ago it was the fathers; now it is the sons.

Upon entering his office I am struck by two things: one, how neatly organised and tidy his desk is (a magazine article I once came across described people with tidy desks as being minimalists who are orderly, disciplined, and cautious); and two, the large image of Nelson Mandela hanging on the wall bearing the words “There Is No Easy Walk To Freedom Anywhere”, a quote which many would argue summarises Odinga’s journey in the fight for democracy in Kenya.

Over the last few months there had been two elections in Kenya (the aftermath of which saw 92 people killed, according to the Kenya National Commission on Human Rights), two swearing-ins and two presidents (depending on who you speak to). Then came “the handshake” – “a new beginning for the country”, stated Kenyatta.

Upon entering his office I am struck by two things: one, how neatly organised and tidy his desk is (a magazine article I once came across described people with tidy desks as being minimalists who are orderly, disciplined, and cautious); and two, the large image of Nelson Mandela hanging on the wall bearing the words “There Is No Easy Walk To Freedom Anywhere”, a quote which many would argue summarises Odinga’s journey in the fight for democracy in Kenya.

August 1st 1982 saw an attempted coup take place in the country, the aim of which was to overthrow President Daniel arap Moi’s government. Days later, Odinga was arrested; this would mark the beginning of what would be almost a decade in prison, torture and interrogation being part and parcel of the experience. In 1988, Odinga was released but six months later he was once again detained and taken to the infamous Nyayo House, before being moved to Naivasha Prison, much of this ten-month spell spent in solitary confinement. He was imprisoned for a third time before being smuggled out of the country in 1991.

When Kenya ceased to be a one-party state, he returned to the country and has been a permanent fixture on the political scene since then – a hero for many, a nuisance for some, loved and loathed in equal measure.

Odinga tells me his latest move was for the good of the country. “We have to put Kenyans and Kenya first, that was the point of the handshake. The one thing we are united on is wanting what is best for Kenya and this is bigger than any of our differences.”

So what does this mean for Kenya? For example, will there no longer be calls from his camp to replace members of the electoral commission? “This is not about targeting individuals, it is about reforms.”

Odinga is no stranger to handshakes and deals. In 1998 there was the dalliance with the then President Daniel arap Moi, while 2008 saw him sign a power-sharing deal with Mwai Kibaki, following the disputed December 2007 elections.

“People were being killed. We had to find a way forward and that is dialogue. This is for the good of the country. Things were at a standstill.”

“He is a peace loving man and has chosen to do good for the country and his people on numerous occasions. This handshake too was the right move,” says one friend to me, while another interrupts, stating, “It’s like he has some kind of messiah complex. He’s defended Moi, defended Uhuru. People took to the streets for him over the last few months. They were teargassed, injured, even killed. Was that all in vain?”

As our discussion continues, Odinga remains adamant. “People were being killed. We had to find a way forward and that is dialogue. This is for the good of the country. Things were at a standstill.”

Does the “we” he is referring to include his fellow NASA co-principals Musalia Mudavadi, Kalonzo Musyoka and Moses Wetangula, the same three men who were not seen at his “swearing in” or at the handshake? “Yes, it includes them,” he replies.

I take his response with a pinch of salt and go on to ask if Deputy President William Ruto was aware of the deal. “I don’t know what Mr Ruto was or was not aware of,” he says in a clipped tone.

Staying on the subject of Ruto, I point out that there are rumours that the Deputy President will run for the presidency in 2022. Will he run against him or was 2017 the last hurrah? He will be 76-years-old by that time and so there is talk of grooming a successor. Does he have anyone in mind?

“I’m not talking about 2022.” His response carries an air of finality. I ask once more and the answer remains the same.

The firmness with which this is said is a clear indication that this part of the conversation is over. Odinga’s face remains expressionless. If he has any other opinions about the 2022 election, William Ruto and the succession talks, he is not about to share them.

If not the presidency then what? I mention that local media had the day before reported that President Kenyatta was lobbying for Odinga to be appointed “African Union Special Envoy”. One article stated that it was part of the handshake deal and would see him “travel across the continent to mediate in peace negotiations and conflict resolution”.

While Odinga had gone to the airport at the time of Miguna’s detention, he could not stop the deportation. Many wondered if this would lead to the end of the truce brought about by the handshake.

“Absolute rubbish,” he says somewhat irritably. “Had any such talks been taking place I would be aware. There is no truth in it whatsoever. Total nonsense. I don’t know where they get these stories from.”

Is it a career path he would consider one day? “Maybe in the future I would go that way, but I’m not thinking about it right now.”

A role involving working with leaders across the African continent leads me to ask what his views are on those who remain in power for years on end. Throughout his political career, he has met and worked with many of these leaders. What will it take to end the rule of some of these strongmen?

A keen historian, he begins to describe Africa’s journey from colonialism to present day, describing the impact of independence, the Cold War and the movements that brought about change. He then diplomatically adds, “It is different for every country. There is no one way. Each country must find its own way.”

Aware that we are running out of time, I am unable to delve further into this, though my curiosity regarding his views on individuals like President Museveni of Uganda and the reported stifling of freedoms in Tanzania under President Magufuli remain. In hindsight I suspect I would have received the same type of measured response as that given to my previous question.

As his mid-morning snack of peanuts and tea is brought in, we return to matters domestic. In the case of his “swearing-in”, did he at any point believe he would have been arrested for treason? “Maybe, but I did not fear that. I was tortured and detained for many years. I was not even able to see my children.”

At the mention of his family, his face softens, allowing me a momentary glimpse into a different side of him. But I remain sceptical. Would the authorities really have dared to arrest a man who holds such a heroic status in the eyes of so many? Would they not have been afraid of the anarchy that could have followed?

“Why not? It has happened before. There is no reason it could not happen again.”

Yet they did not arrest him. Instead it was those around him, including lawyer and self-declared “National Resistance Movement General” Miguna Miguna, who was detained. At the time of our interview, Miguna had just been deported to Canada for a second time after immigration officials refused him entry into the country. The state claimed that Miguna had lost his Kenyan citizenship in 1998 when he took on Canadian citizenship as at the time the law did not allow for dual nationality, and thus he would be required to re-apply for citizenship or a visa before he would be allowed to enter Kenya. (Yet Miguna ran for Governor of Nairobi County in 2017 and citizenship was apparently not an issue then.)

While Odinga had gone to the airport at the time of Miguna’s detention, he could not stop the deportation. Many wondered if this would lead to the end of the truce brought about by the handshake. “The treatment Miguna faced at the hands of the authorities was unacceptable and I spoke out about it. As things currently stand he is back in Canada and…”

At this point we are interrupted and I am told we have run out of time.

I reflect upon the many sides of Raila Odinga: the politician, the hero, the leader, the messiah, the diplomat, “Baba”, the troublemaker and so on.

I regret not being able to ask one final question: Was it all worth it? Yet I am already aware of the answer I would have been given.

Later that day, as my taxi journey comes to an end, the driver says, “I feel let down, and I don’t think I will vote again in 2022. But always remember, in Kenya there are only two tribes, the rich and the poor. Handshake or no handshake, this will never change.”