WHEN A COUP IS NOT A COUP: Why The Removal Of Mugabe Will Not Change Zimbabwe 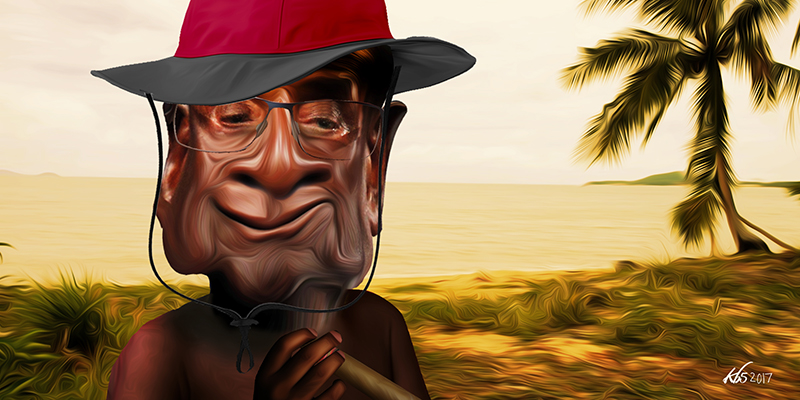 So sang the late, great, Jamaican reggae star, Bob Marley in 1979, just a year before the country was finally won its independence from white rule. Today, with Robert Mugabe forced to resign as President after being fired by his party and with Zimbabwe about to inaugurate a new leader, the questions many will ask is whether this is another moment of liberation – only this time liberation from the erstwhile liberator of 1980- and what a post-Mugabe future might look like.

Soon we’ll find out who is
The real revolutionary

For the last 37 years, under Mugabe’s Presidency – who at 93 was the world’s oldest head of state and second only to Teodoro Obiang Nguema of Equatorial Guinea as its longest serving non-royal ruler- Zimbabwe has gone from being southern Africa’s bread basket to the region’s basket case. Mugabe himself, once an icon of anticolonialism and, with his seven degrees, great hope of African renaissance, has become the butt of continental jokes.

The path the country and its former ruler have trod is depressingly familiar. An independence hero who proceeds to govern his country as a personal fiefdom, enriching himself and his family, destroying all internal opposition, impoverishing the population and committing many of the same abuses the anti-colonial struggle was meant to put an end to.

In his early years in power, initially as Prime Minister, Mugabe was widely praised for expanding social services, including building schools and hospitals. However, like others across the continent, his government failed early on to deal with the legacy of the country’s colonial past and the issue of whether to reform the state they inherited or whether, as Panashe Chigumadzi put it in her article for the New York Times, “conform to the historic compromises that brought them into power”.

The path the country and its ruler have trod is depressingly familiar. An independence hero who proceeds to govern his country as a personal fiefdom, enriching himself and his family, destroying all internal opposition, impoverishing the population and committing many of the same abuses the anti-colonial struggle was meant to put an end to.

Again, like his counterparts, Mugabe opted to shelve the issue and concentrate on consolidating his own grip on power. Facing internal dissent, he launched a brutal crackdown in the predominantly Ndebele speaking region of Matabeleland, most of whom were supporters of his rival Joshua Nkomo, in which according to some estimates more than 20,000 people were killed.

The unresolved colonial legacy – especially over the starkly unequal distribution of land – would prove a useful tool in later years. In the 1990s, he would successfully divide the opposition by offering veteran of the independence war tracts of land and demonizing civil society and labor unions, as tools of the West.

It was a strategy he employed again in the late 1990s and throughout the 2000s to buff up his revolutionary credentials by launching a disastrous land redistribution programme which targeted the country’s tiny land-owning white minority. Officially sanctioned land invasions, violence and continued government threats forced most large scale white farmers off the land and agricultural production plummeted. The country went from being a net food exporter to requiring food aid.

As the average Zimbabwean has continued to suffer the effects of economic decline, there has been continued splurging on a small coterie of officials and ruling party loyalists. Last year, the government reportedly spent $800,000 on festivities to mark Mugabe’s 92 birthday and his family has done very well for itself over the years. His wife, 40 years his junior and who has earned the nickname “Gucci Grace” for her lavish shopping sprees, made no secret of her desire to keep the presidency within the family when he eventually passed on.

And I don’t want my people to be tricked
By mercenaries.

Will the intervention by the Zimbabwean military -the coup that was no coup- change this? Not likely, despite the military’s declaring its intention is to “pacify a degenerating political, social and economic situation”. It claimed to target, and has been rounding up “criminals around [Mugabe] who are committing crimes that are causing social and economic suffering in the country in order to bring them to justice”. Yet the same army was solidly behind Mugabe throughout his years of abuse – it was the North Korean trained Fifth Brigade that was responsible for the massacres in Matabeleland locally referred to as “Gukurahundi” (a Shona term that loosely translates to “the early rain which washes away the chaff before the spring rains”).

His wife, 40 years his junior and who has earned the nickname “Gucci Grace” for her lavish shopping sprees, has made no secret of her desire to replace her husband as president when he eventually passes on.

In fact, this was largely an internal struggle within the ruling party, ZANU-PF, over who is to succeed the aging dictator. the immediate spark for the current crisis was Mugabe’s decision to fire his long-time ally and now replacement as President, Emmerson Mnangagwa, from the vice presidency, to pave the way for his wife to succeed him. The military seemed reluctant to openly intervene, its head, Gen Constantino Chiwenga, and 90 senior officers initially only demanding a halt to the purge of Mnagangwa’s allies within the party. Mnangagwa himself is no angelic figure, attracting the moniker “The Crocodile” for his actions during the independence struggle and as a reminder of his alleged role -which he denies- in the Gukurahundi massacres, as Minister for State Security and Chairman of the Joint High Command, and in masterminding attacks on opposition supporters after 2008 election.

This then is a dispute, not over how Zimbabwe is run, but over who runs it. In June, University of Zimbabwe Political Science lecturer, Eldred Masunungure, when asked about the possibility of military coup if Mnangagwa did not succeed Mugabe. He responded thus: “It will be restricted to the elite level. This level does not involve you or me or the 13 million Zimbabweans. It is an elite struggle.”

The people now jostling to replace Mugabe have been more than content to benefit from the policies he has pursued, even when those came at the expense of long-suffering Zimbabweans.

This then is a dispute, not over how Zimbabwe is run but over who runs it.

It is instructive too that the record of military takeovers in Africa and across the world gives little cause for hope that this particular one will quickly lead to a restoration of genuine democracy in Zimbabwe. From Nigeria to Egypt to Burma, the record shows that once military generals get a taste of power, they are loathe to give it up. Further, they tend to govern as badly, or even worse, than the civilian despots they overthrow.

Amid talk of the military setting up a transitional government to return the country to civilian rule and prepare fresh elections, one senior opposition politician told CNN that “this takeover was planned a long time ago by Emmerson Mnangagwa and secret discussions did take place with opposition about a succession plan including forcing out Mugabe… What you saw yesterday at State House [published images of Mugabe speaking with military chiefs] was acting.”

This ties in with a Reuters investigation in September that found that Mnangagwa and other political players, including former prime minister Morgan Tzivangirai, with had already been positioning themselves for this possibility.

Once again, the focus would appear to be on appeasing the country’s former colonial rulers at the expense of its citizenry.

The report, which cites “politicians, diplomats and a trove of hundreds of documents from inside Zimbabwe’s Central Intelligence Organization (CIO)” says that in the event of Mugabe’s leaving office, “Mnangagwa… envisages cooperating with Tsvangirai to lead a transitional government for five years with the tacit backing of some of Zimbabwe’s military and Britain. These sources leave open the possibility that the government could be unelected.”

“This unity government would pursue a new relationship with thousands of white farmers who were chased off in violent seizures of land approved by Mugabe in the early 2000s. The farmers would be compensated and reintegrated, according to senior politicians, farmers and diplomats. The aim would be to revive the agricultural sector, a linchpin of the nation’s economy that collapsed catastrophically after the land seizures,” it continues.

Apart from restructuring the state, Zimbabwe will also need to build the necessary infrastructure to keep it accountable to the people.

Once again, the focus would appear to be on appeasing the country’s former colonial rulers at the expense of its citizenry. Rather than seek to comprehensively restructure the state so it works for all its people, Zimbabwe’s would-be rulers seem bent on resuscitating the same “historic compromises” that have been at the root of the country’s malaise.

Rather than an agreement to restore the power of elites, any transitional government should pursue a genuine broad-based national reflection on the nature of the Zimbabwean state and force the country to face up to the demons of its past, rather than hide from them. For all his many faults, it must be acknowledged that Mugabe’s attempts at redressing historical injustice, though pursued for less than noble reasons, struck a chord with many ordinary Zimbabweans (and many ordinary Africans beyond).

Apart from restructuring the state, Zimbabwe will also need to build the necessary infrastructure to keep it accountable to the people. This includes a free and independent media -it has been great to see international networks allowed to report openly once again- and a vibrant civil society.

The current situation, while not ideal, thus still offers a valuable opportunity for Zimbabwean leaders to do right by their people. Whether they will take it remains to be seen.