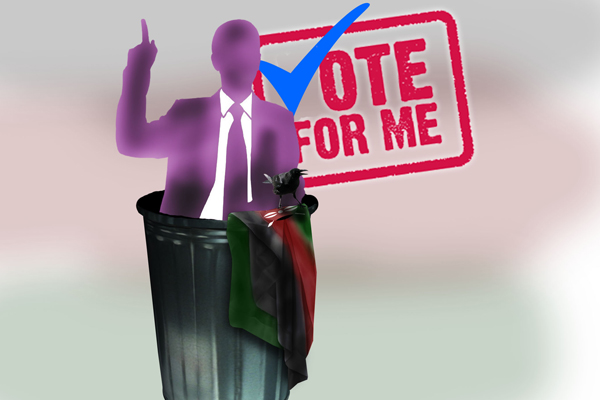 When you see that trading is done, not by consent, but by compulsion; when you see that in order to produce, you need to obtain permission from men who produce nothing; when you see that money is flowing to those who deal, not in goods, but in favour; when you see that men get richer by graft and by pull than by work, and your laws don’t protect you against them, but protect them against you; when you see corruption being rewarded and honesty becoming a self-sacrifice; you may know that your society is doomed. – Ayn Rand

I run a socio-political blog titled www.profmichaelwainaina.com that engages Kenyans on their political perspectives while in turn share my political perspectives with them. It has been an eye-opening experience for me, not least for its unprecedented provisions for actual interactions. The blog, as at the time of writing this article, has over 22,000 comments and over 19,000 followers on Facebook.

This interaction has given me an opportunity to map the general sentiments of Kenyans as regards their politics and politicians at the national level. From this, I have been able to reaffirm my earlier belief that corruption in Kenya is not a legal issue, nor is it an economic issue, nor is it a moral issue; it is a political issue. As in any other Kenyan political discourse, the conversations in my blog are dominated by the issue of corruption, its causes and possible solutions. The positions of the commentators will generally follow their political affiliation, which are in turn determined predominantly but not entirely by tribe.

WHO NEEDS A POLITICAL AGENDA? THIS IS KENYA

How does a political discourse on corruption, its causes and cures ultimately lead to tribally oriented engagements and tribally based solutions?

The primary purpose of political competition in Kenya is for the tribal warlords to gain power and their primary method of political mobilisation is tribe. Having ‘locked in’ a tribal voting bloc, they have no need for accountability and they do not need a progressive agenda. They only need a tribal constituency

It happens because, in Kenya, there is an unholy trinity linking tribalism, politics and corruption. There is a single political class in Kenya that comprises tribal warlords complete with identified and well-guarded ‘strongholds’ and with comparable histories of corruption, chaos and mediocrity. Their whole political ideology can be summed up in three words: Ethnicity, impunity and mediocrity. Their sole goal is to ethnicise, tyrannise politically and steal. The political class has no inspirational, modern or progressive agenda to address the malaise of poverty that affects the people or to modernise the country.

The primary purpose of political competition in Kenya is for the tribal warlords to gain power and their primary method of political mobilisation is tribe. Having ‘locked in’ a tribal voting bloc, they have no need for accountability and they do not need a progressive agenda. They only need a tribal constituency.

Currently, this largely homogenous political class is divided into two rival tribal coalitions who are tied together by the political interests and fortunes of their tribal warlords. They call themselves CORD and Jubilee.

CORD was unable to use tribal numbers in 2013 to come to power. Jubilee pulled it off, courtesy of what has come to be known as the ‘tyranny of numbers’ They had no agenda, no plan and no strategy. They just happened to have the tribal numbers and they happened to be fugitives from international justice, having been indicted for crimes against humanity at the International Criminal Court at the Hague.

The interactions in my blog will have generally three categories based on this current political configuration: Supporters of Jubilee and supporters of CORD; and a third currently minority group that thinks the supporters of either are ‘foolish Kenyans’ who will vote for their tribal kingpins regardless of their corruption and mediocrity.

MY DEVIL CAN BEAT UP YOUR DEVIL ANYTIME

The discourses on my blog seem predicated on the assumption that CORD and Jubilee are the only two options Kenya has for the 2017 election, while there is generally an agreement that both are equally tribal, corrupt and mediocre. The fact is the country is ready to elect one of them next year and unless something happens (more on this later), they will elect one of them. Those of my respondents who belong to the reality-based group claim that this ‘fact’ is unassailable. They subscribe to ‘the devil you know’ theory, with tribe being the sole determinant of ‘my’ devil.

This has developed the sentiment among the third section of the respondents in my blog that the Kenyan population is made up of ignoramuses who, knowing that the CORD /Jubilee tribal political class is made up of thieves and looters, will still vote for them next year, and true to their character, the thieving and looting will continue.

I agree that unless something drastic happens, the Kenyan population will vote for the tribalists and thieves next year.

I disagree, strongly, that they will vote for them because they are stupid. I disagree that Kenyans are tribalists and thieves in the making who only lack the opportunity, as some commentators in my blog suggest. My response to the ‘voters are stupid and all of us are tribal and corrupt’ theory has always been that there is nothing wrong with Kenyans. Their behaviour is totally understandable, explainable and therefore modifiable. I call it the power of a singular narrative. Their behaviour is controlled by this narrative.

Politics is about narratives. Imagined narratives. The dominant narrative carries the day. In pluralistic societies, several narratives are competing for political space. The political class seeks to differentiate itself with the narratives they espouse and seek to entice the population with these narratives. The purpose of pluralism is to ensure that there is no dominant single narrative. And this is the problem with Kenya.

We have a political class with a dubious CORD /Jubilee divide but with a single narrative, and it has succeeded in making that narrative unimodal and dominant – tribe and access to state largesse using tribe. The choice is not between those who espouse the tribal narrative and others. The only choice is between which tribalist. People will always choose ‘my’ tribalist. The tribal warlords want it this way and therefore the tribal political narrative is not about to change. The political class simply cannot survive without it.

Access to state largesse and the legitimisation of corruption occurs via this narrative. It is the narrative that supports the ‘it is our time to eat’ mentality. It is also the narrative that supports the ‘we are being finished’ siege mentality. It is the basic definer of ‘political out’ and ‘political in.’ Those who are out do not complain against corruption because they would like to get rid of it, they complain because they are exempted from the eating. Corruption has become a big issue in the current political set-up because of the ‘out,’ group not because there is a consensus that it is bad. When the politicians in CORD and Jubilee were all together in the blood-soaked coalition government between 2008 and 2012, corruption was a subdued issue.

We will not succeed in fighting corruption unless we deal with the tribal political narrative. The question is how?

A CRISIS OF THE IMAGINATION

When President Barrack Obama came to Kenya, he said that the problem of ethnicity is a problem of the imagination. I agree. We have been bamboozled by the tribal political class into tribal cocoons. So much so that we are unable to imagine an alternative narrative. The political narrative of the current political class is ethnicise, tyrannise and steal. Jubilee are at the top of this narrative. CORD are playing catch up but doing a pretty good job. If they do win in 2017, and if how CORD-controlled counties are behaving is anything to go by, they will spin the most tribal, corrupt and wayward government this country has ever seen.

The greatest crisis of our lives is neither economic, intellectual nor even what we call religious. It’s a crisis of imagination. We get stuck on our paths because we are unable to reimagine our lives differently from what they are right now. We hold on desperately to the status quo, afraid that if we let go, we will be swept away by the torrential undercurrents of our emptiness.

Political imagination is the combination of the deep insights that come from a good education (though not always), natural brilliance and charisma. The ability of an individual to craft this compelling alternative narrative and communicate it convincingly to the people is what this country currently lacks. I do not know what that narrative is but I do know that for it to inspire the population to vote differently, it has to be new, non-ethnic and it has to be simply but compellingly communicated. Not many people are endowed with the intellectual wherewithal and the communication ability to conceptualise and articulate such an alternative narrative. In 2013, we had eight presidential candidates and the only ones who had a narrative were the tribal kingpins. The difficulty is more so in circumstances where the dominant narrative is so overwhelming like the ethnicise, tyrannize and steal narrative of the current political class in Kenya.

Political imagination is the combination of the deep insights that come from a good education (though not always), natural brilliance and charisma. The ability of an individual to craft this compelling alternative narrative and communicate it convincingly to the people is what this country currently lacks

The response I get on my blog to my suggestion that our only hope is to imagine and articulate an alternative non-ethnic political narrative is that it is impossible, utopian, naive, unrealistic and academic.

I agree. It could be all these things, but unfortunately it is also true. The antidote to such a compelling and dominating political narrative like tribe and access to state largesse as used by the current political class is an equally compelling and dominating alternative political narrative. It is R. Burkminster who said, ‘Never change things by fighting the existing reality; to change things build a new model that makes the existing model obsolete.’

We need a new model that makes the old tribal model obsolete. And this is why I disagree with the theory of the stupidity of the Kenyan voter. For us to articulate a new non-ethnic political narrative and mobilise around it, we must believe, really believe, that the people are capable of making the right choices if they have the right options. The instrument of change is the people and the argument that they are stupid undermines this fact and makes change a non-possibility.

Events around the world have proved how a message that resonates with people can cause unthinkable seismic political shifts. Brexit and the election of Donald Trump are perfect examples.

Kenya eagerly awaits gallant men and women capable of articulating a new alternative non-ethnic political narrative. Our problem is not the thieving tribal political class, it is the failure of imagination to conceive and communicate an alternative narrative. This is the greatest time of need for our country. As Charles de Gaulle said:

These are the times in which a genius would wish to live. It is not in the still calm of life, or the repose of a pacific station, that great characters are formed. The habits of a vigorous mind are formed in contending with difficulties. Great necessities call out great virtues. When a mind is raised, and animated by scenes that engage the heart, then those qualities that would otherwise die dormant, wake into life and form the character of the hero and the statesman.