By Juliet Atellah and Purity Mukami Is there a link between democratic liberties and human rights on one hand, and good governance and economic progress on the other? Ever since the fall of the Berlin wall, a thirty-year orthodoxy has argued that the former are indispensable to the latter. However, a report by the Mo Ibrahim Foundation raises questions about this.

According to the 2020 Ibrahim Index of African Governance (IIAG), political freedoms across the African continent have continued to deteriorate over the last decade, with citizens having less freedom to assemble in 2019 than they did in 2010, and the trend has accelerated since 2015. On the other hand, countries’ scores in the Human Development and Foundations for Economic Opportunity categories have improved, with the biggest strides being made in infrastructure and health.

And although African countries made progress in overall governance during the last decade, the rate of improvement has slowed down over the last five years which explains the below average score in 2019.

Does this mean that the Chinese model of development—which views human and political rights as a barrier to economic progress—is supplanting the Western model, which proposes that they should go hand-in-hand on the continent?

Andrea Ngombet, a human rights activist and former presidential candidate in the Republic of Congo, says that there is more to it than that.

“To be completely honest, the combination of Chinese money, Western companies’ corruption and African autocrats’ lust for power are the causes of the retreat of democracy. All of them have no interest in a democratic Africa with tax to pay, protected workers and protected environment,” he said.

When asked why democracy is in retreat in African countries, Ngombet explained, “China [reinforces] African autocrats with cheap loans which they use for clientelism and populist projects. As the loans are without any democratic conditions, it allows the autocrats to resist the civil society pressure for democracy and accountability.”

Ngombet also explains that, “When looking at the quality of economic growth, it comes with bad loans over authoritarian regimes and those loans finance unprogressive infrastructure.”

The IIAG report shows that Gambia—the most improved of the 54 African countries—experienced the most changes after 2016 when Yahya Jammeh’s repressive 22-year-reign ended, although the current regime still faces challenges in enforcing environmental policies and in the areas of quality of education, law enforcement and compliance with international health regulations. 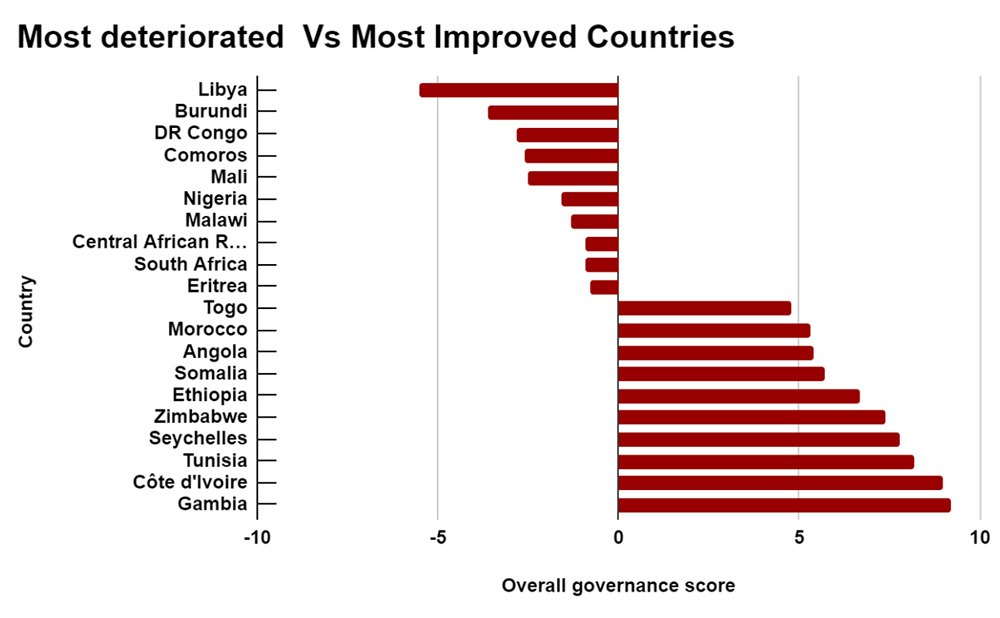 The study, whose goal was to help further the conversation on governance in the continent and assess current and emerging trends, analysed 237 variables from 40 different sources. It revealed that African countries are performing the worst in the Participation, Rights & Inclusion category (with an overall average score of 46.2 in 2019). This decline is caused by a deteriorating security situation and an increasingly “precarious environment for human rights and civic participation”. 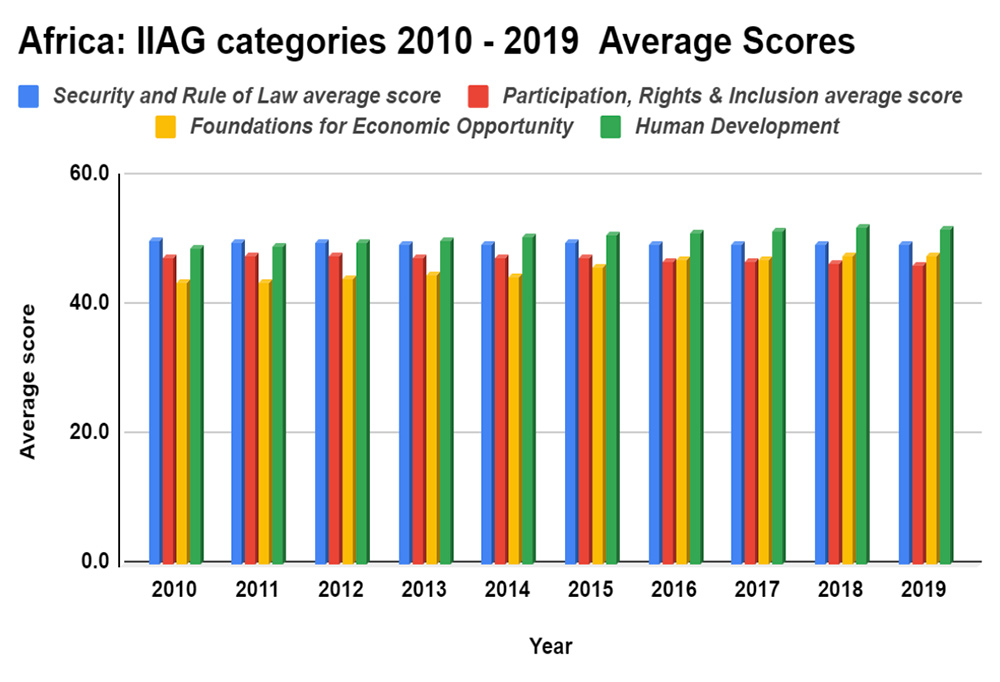 Nearly half the countries on the continent had less freedom to associate and assemble and a shrinking space for political pluralism and civil society at the close of the 2010s than they had at the beginning of the decade. This was the continuation of a diminution of civil liberties in the second half of the 2000s following improvements in the first half of that decade.

In particular, compared to the country’s scores in 2010, Kenya’s scores for freedom of association and assembly as well as media freedom fell by over 20 per cent from 2015 while the indicators for transparency and accountability, as well as anti-corruption mechanisms also fell during the same period.

However, the Ibrahim report does indicate that the indicators for digital access, energy access, infrastructure and human resources in the education sector have shown a marked improvement under the current Kenyan regime. This is despite a huge debt burden and numerous unresolved corruption cases.

Increased restrictions have been placed on the establishment and operations of civil society and non-governmental organisations which have also experienced higher cases of repression and persecution in most African countries. Political parties have experienced reduced access to state-owned media and public financing for their campaigns which has curtailed their operations.

Democratic elections, the only indicator that had shown a steady improvement since 2010, took a downward spiral in 2015. Election results in countries such as Uganda, Kenya, Côte d’Ivoire, Central Africa Republic, Gabon and the Democratic Republic of Congo have been consistently disputed as the integrity of the electoral process and the independent functioning of election-monitoring bodies have been compromised.

“You can not have democratic elections in the absence of strong institutions such as Independent judiciary, a parliament that is not completely corrupted, independent press, civil societies to monitor and people to engage citizens ahead of elections and inform them by helping them understand democracy rest on their shoulders, governance rests on their shoulder, and not the person that they’ll vote in for,” Tutu Alicante, executive director at EG Justice in  Equatorial Guinea explains.

Countries such as Equatorial Guinea, Eritrea, Chad, DRC, Rwanda and Cameroon that have scored dismally in the participation, rights and inclusion category, have all been under the rule of African leaders who have clung on to power.

These findings resonate with those of the 2020 Economist Intelligence Unit Democracy Index which placed Chad, Central African Republic and Democratic Republic of Congo at the bottom of the rankings in democracy in Africa, measured by electoral process and pluralism, functioning of government, political participation, political culture and civil liberties.

It may be encouraging for citizens of Djibouti, Somalia and Eswatini that although their countries are among those with the least scores in terms of participation, they have registered improvements over the decade.

“Full democratic participation is essential for the development in our society. In Africa if we are thinking about Ubuntu as a basic principle of our society, then clearly democracy is needed in a way in which we all participate in order for us as a society to rise up,” Tutu adds.

Egypt has performed exceedingly well in the score for infrastructure (80/100), and health development indicators (all above 60/100) yet, surprisingly, the country is the third least performing country in Africa, after Burundi and Eritrea—with a score of 7.9/100—when it comes to participation as a principal of good governance.

Egypt has been under dictatorship since the Arab Spring overthrew Hosni Mubarak in 2011. The government has authorised the blocking of close to 500 websites belonging to news outlets, blogs and human rights organisations, and in 2017 blocked the use of internet tools such as VPNs.

Other countries that have experienced drastic internet shutdowns, legal digital restrictions and surveillance include Ethiopia, Zimbabwe, Morocco, Benin, Rwanda, Morocco, DRC and Uganda. This often happens during electioneering periods or citizen protests despite “freedom of expression being a fundamental human right enshrined in Article 19 of the Universal Declaration of Human Rights and the cornerstone of democracy”, according to UNESCO, an organisation to which most of these countries belong.

Countries that have managed to transition from dictatorships or civil wars, such as Sierra Leone, Gambia, Togo, Angola and Sudan manifest increasing improvement in their citizens’ access to the fundamental civil rights.

African governments are slowly becoming more inclusive and equal in the provision of public services and the creation of socioeconomic opportunities.

Kenya and Somalia have seen the most improvements under the Gender indicator. Although Kenya has faced difficulties in passing the two-thirds gender rule (leading former Chief Justice Maraga to direct that the president dissolve parliament), it has made impressive strides in providing social-economic opportunities for women and in the representation of women in the executive even though gender equality in civil rights has declined substantially.

Is it a question of striking a delicate balance between good overall governance and maintaining the economic growth and security of a country? Or might too much freedom lead to coups and mutiny?

The EUI Democracy report ranked Mali and Burkina Faso—both of which do not have full control over their territories and experience rampant insecurity precipitated by jihadist insurgents—as the worst performing countries in West Africa in terms of democracy. They were downgraded from “hybrid regime” to “authoritarian regime”. The report concludes that overall it was a terrible year for democracy in Sub-Saharan Africa, where 31 countries were downgraded, eight stagnated and only five improved their scores.

It is an interesting phenomenon that, despite low scores in civil and political rights, the best scores are to be found in the Foundations for Economic Opportunity and Human Development categories with 20 countries having improved their governance score in these two areas, albeit at a slowed rate in the last five years. The biggest strides have been made in the Infrastructure and Health indicators, complemented by improvements in Environmental Sustainability.

More often than not, infrastructure and health projects are marred by allegations of corruption and lack of transparency. Yet, a correlation model run by the Mo Ibrahim Foundation shows that there is a strong and positive correlation between the overall governance score and specific indicators such as rule of law and justice, inclusion and equality, anti-corruption, transparency and accountability and business environment. Even though statisticians agree that “correlation does not imply causation”, this model indicates that countries with higher scores in those indicators also have higher overall governance scores.

Yuen Ang argues that “the idea that economic growth needs good governance and good governance needs economic growth takes us to a perennial chicken-and-egg debate” whereas Meles Zenawi has claimed “There is no direct relationship between economic growth and democracy historically or theoretically. Democracy is a good thing in and of itself irrespective of its impact on economic growth and my view is that in Africa most of our countries are extremely diverse that maybe the only option of keeping relationships within nations sane. Democracy may be the only viable option of keeping these diverse nations together, we need to democratise but not in order to grow, we need to democratise in order to survive as a united same nation.”

The 2020 IIAG report paints a picture of a continent that had long embarked on the road to decline in rights, civil society space and participation before it was hit by COVID-19. Even though Africa accounts for 3.5 per cent of the global reported COVID-19 deaths, the pandemic is now threatening hard-won gains in areas such as foundations for economic opportunity and human development.