Toa Kitambulisho! Evolution of Registration of Persons in Kenya 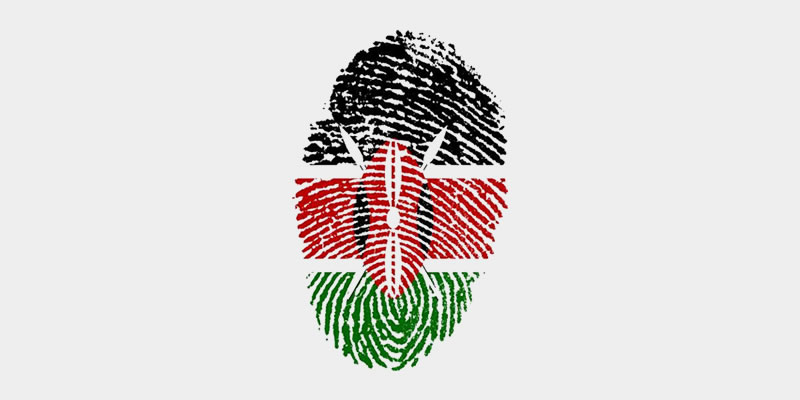 In 1915, the colonial government enacted the Native Registration Ordinance but it was not until 1919 and 1920 that it was implemented. The registration was an instrument to control and regulate the recruitment of African males into colonial labour. It contained a registration certificate and fingerprint of the holder. The Ordinance made it mandatory for all adult males aged 16 and above to be registered. Upon registration, they were issued with registration papers kept in metallic copper containers attached to a chain commonly referred to as “Kipande.” The Kipande was worn around the neck like a dog collar. The Kipande contained the wearer’s tribe, their strengths and weaknesses and comments from his employer on his competence, therefore, determining his pay or whether or not he would be employed.

The government used the Kipande to curtail freedom of Africans and monitor labour supply. It also empowered the police to stop a native anywhere and demand to be shown the document. For Africans, the Kipande was like a badge of slavery and sparked bitter protests.

In 1947, the Kipande was replaced by an identity booklet which had fingerprints but not the bearers portrait. A new law, the Registration of Persons Ordinance, was passed to make it mandatory for all male persons of all races of 16 years and above to be registered. But under this new law, the identity cards issued distinguished between the protectorate and non-protectorate persons. Although the Ordinance sought to remove discrimination based on race, it made no attempt to remove gender-based discrimination. The trend continued even after independence until 1978 when an amendment was made to what has become the Registration of Persons Act (Cap 107, Laws of Kenya) to include the registration of women who had attained the age of 16 years and above. A further amendment to the Act was made in 1980 to raise the age of registration from 16 to 18 years.

In 1980, legislation was amended to include women and the booklet was replaced by the “First Generation” paper identity card with subtle security features embedded in the new document. The document design contained the bearers portrait and fingerprints. Raphael Musau, who was the officer in charge of National Registration Bureau and driving the whole process, witnessed the handing over of the new generation national identity card to the former president Daniel Arap Moi. In 1977, Raphael Musau was requested by the then vice president Daniel Arap Moi to design a new Kenyan Identity card which was to replace the blue colonial passbook. His first port of call, accompanied by Principal Registrar of Persons, was De La Rue, Company in London who eventually were tasked with making the new design.

The first generation identity card was replaced in 1995 by the smaller credit-card size “Second Generation” card, that was in essence, a laminated paper card. The card includes basic information [name, sex, date and place of birth, date and place of issue] a photo, a signature and an image of one fingerprint.

In 2011, the second generation card, in turn, was upgraded to the present plastic card without fundamentally changing its features. The current generation of IDs therefore date back to 1995, the last time that the population was re-enrolled.

The card includes basic information [name, sex, date and place of birth, date and place of issue] a photo, a signature and an image of one fingerprint. It also includes a sequential 8-digit national ID number (just a sufficient number of digits to cover a population the size of Kenya’s) as well as a 9-digit serial number. The information on the front of the card is machine readable on the back. Since 2007 there have been intentions to move to a “Third Generation” e-ID card with a chip and enhanced security features, but these have not materialized because of financial constraints. 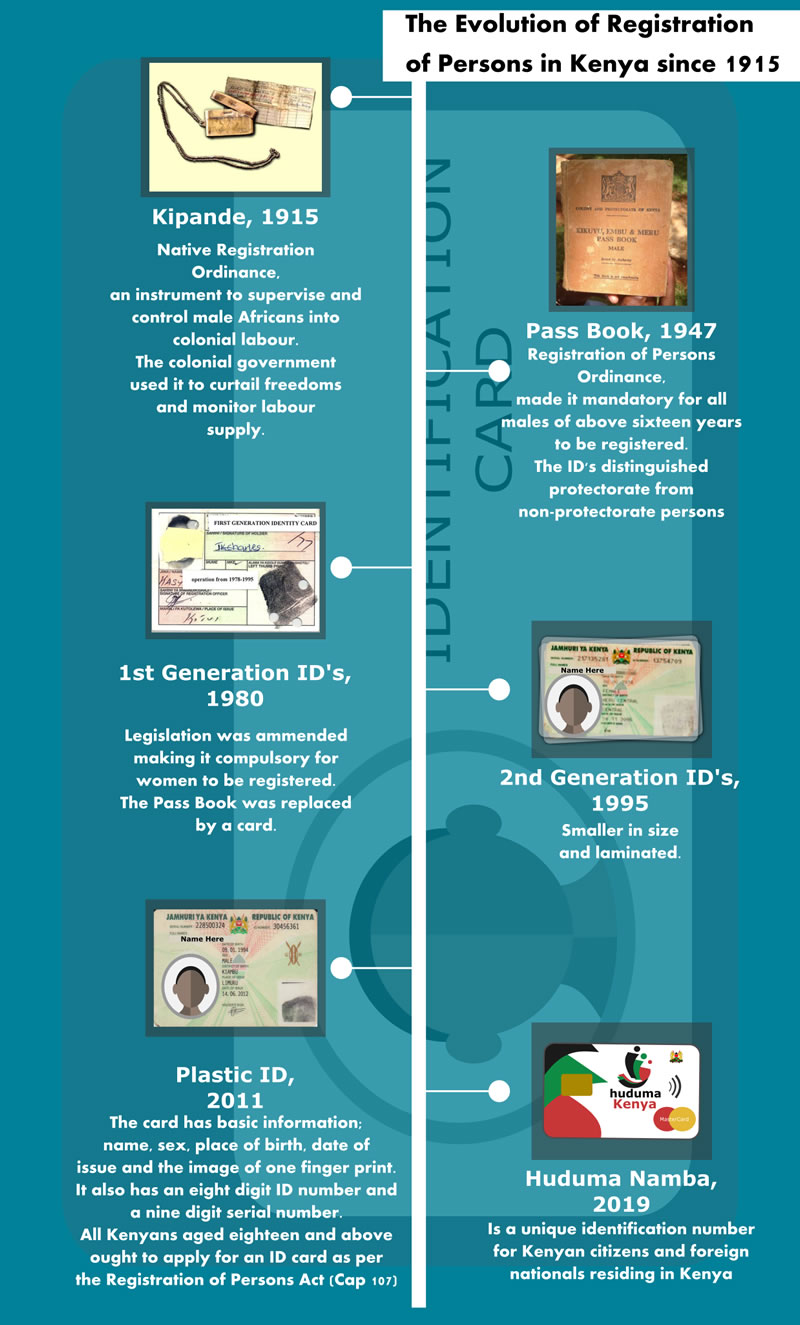 Under the Registration of Persons Act (Cap.107), it is a requirement by the law of Kenya that a Kenyan citizen who attains the age of eighteen must have an Identity card facilitated through the Department of National Registration Bureau.

The Kenyan NID is mandatory and must be acquired when an individual turns 18, and is issued free of charge. The Kenyan NID does not have an expiration date. Thus far, Kenya has issued 24 million cards, but this total may include duplicates as well as the inactive cards of deceased individuals. There are about 1.2 million new registrations each year. Foreigners who remain in Kenya more than 90 days are required to register as an alien and get an alien registration card.

Every citizen in Kenya not previously registered has to go through the first category which is the initial registration of applying for an identity card. At this stage, no fee is paid to access this service. In Duplicates – resulting from lost, defaced or mutilated cards. National Registration Bureau charges a service fee of Kshs.100 with effect from 16th March 2018 for replacement and change of particulars resulting from a change of name(s) and residence which attracts a fee of Kshs.300 and Kshs 1,000 (depending on the request).

The requirement needs for the first stage of ID application by Kenyan citizens include a birth certificate or baptism certificate, both parents identity cards and copy, two passport size photos and a school leaving certificate.

On 19th September, 2005, the Head of Public Service appointed an Inter-Ministerial Taskforce on Integration of Population Register Systems (IPRS) in line with the National Economic and Social Council (NESC) recommendation on the fast-tracking of the integration of the registration systems. The Taskforce made several recommendations one of them was the introduction of a unique national number – Personal Identity Number (PIN) for all individuals resident in the country. That the number be assigned at birth for all residents and serve as the control number for all registration systems, Establishment of a National Population Register, containing information of all residents and serve as a central reference for all population registration systems, a central database. Development of nationwide ICT infrastructure backbone to link government agencies for purpose of information sharing and verification. According to  Kenya Law Reform Commission, the recommendations of this taskforce formed the basis for the formation of the Integrated Population Register System (IPRS) to serve as the single source of truth for the population data in the country. Although IPRS was a good step towards the integration of population data, it was limited in capacity since it only consolidated data from primary population registration agencies, these being Civil Registration Department (CRD), National Registration Bureau (NRB) and Department of Immigration Services (DIS), which are established by different legal regimes. Further, IPRS did not seek to validate the information received from primary agencies by getting information from the source, Kenyans. There were a number of shortcomings of IPRS hence the Government took up the challenge. In order to improve and build upon the progress made by IPRS, the Government initiated the  National Integrated Identity Management system ( NIIMS) programme under Executive Order No. 1 of 2018. NIIMS was subsequently approved by the National Assembly vide the Statute (Miscellaneous Amendments) Act, No 19 of 2018.

The purpose of NIIMS project is to create and manage a central master population database, which will be the ‘single source of truth’ on a person’s identity since it will contain information of all Kenyan citizens and foreign nationals residing in Kenya and will serve as a reference point for personal data for Ministries, Departments and Agencies (MDAs) and other approved stakeholders. NIIMS involves registration of all Kenyans both locally and abroad and also all foreign nationals who live in Kenya. Upon registration, the enrolled persons will be issued with a unique identification number referred to as Huduma Namba and later a multi-purpose card referred to as Huduma card, which will substitute the current inefficient identity cards. The Huduma Namba, being a unique identification number, will be used to identify all persons in the country and thus will be used while accessing government services and identification both by government and the private sector. It will waive the need for issuance of multiple registrations of the same person and will be used from cradle to death. NIIMS will be the single source of foundational data about a person and all government agencies will tap into it. The Huduma card will contain the integrated personal and foundational data of the cardholder. The mass registration for Huduma Namba began in March 14th 2019.