Vaccination in Kenya has a Fake News Problem; And it is Not Happening Online 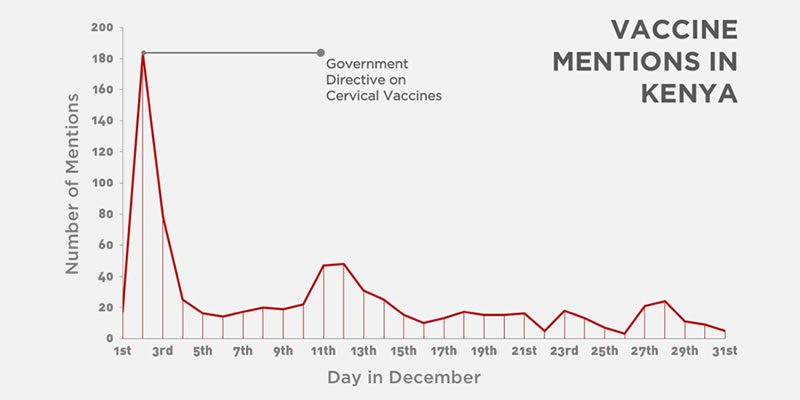 When you come across the term ‘fake news’, you will most likely think it has something to do with politics. This is because the majority of the research and attention given to fake news has been focused on its use in politics and election campaigns. However, misinformation and disinformation also presents a big challenge in other sectors. Health is one such area that our research shows is also being affected by fake news. However, it does’nt get the mainstream attention afforded to categories like politics.

As the Information Age has evolved in the era of social media, we have seen misinformation in health explode with no system of facts in place to counter the spread of falsehoods. Misinformation to do with health is uniquely delicate in that it completely suffocates the truth in many cases, exposing people to very real physiological danger. The forces behind this brand of fake news includes false advertising pushing products like waist trainers, genitalia enlargement pills, magical weight loss pills and meal replacements. The misinformation is also spread through myths and misconceptions of diseases such as ebola, as witnessed on social media whenever an outbreak occurs. In countries like the U.S, vaccine hesitancy has found a home online with the ‘anti-vaxxer’ movement gaining massive momentum in Facebook groups and other social media channels. ‘Anti-vaxxers’ believe there’s a connection between vaccination and autism, as well as other brain disorders, despite there being no scientific evidence supporting that theory. We have also seen healthcare being caught up in political tugs of war, leading to falsehoods being trumpeted by influential public figures or mainstay institutions like the church. In short, fake news is seriously damaging our health.

This phenomenon has been manifested in Kenya in the area of vaccination. The country has a long history of vaccine hesitancy and distrust, which has been mainly fuelled by the church’s skepticism towards the procedure. A survey carried out by Ipsos in 2014 found:

Most recently, there has been loud public debate and uproar over a national cervical cancer vaccine drive planned by the Kenyan Government and targeted at girls aged 9 to 14 years.

All girls aged 10 years will next year in May be given a cervical cancer vaccine in a bid to rapidly build up their immunity, the Health ministry has said. https://t.co/VkQBwoquHk pic.twitter.com/CguqY0uXvN

We conducted research around this conversation and other vaccine-oriented conversations in recent history to understand the underlying attitudes towards vaccines among Kenyans. We wanted to trace any misinformation and misconceptions being pushed online around this issue and the forces behind it. Here is what we found:

1. News stories are the trigger of conversations around the vaccine. News coverage sparks Kenyans to share misinformation around vaccines, either innocently or maliciously.

As with any other facet of public health, vaccine drives need to be supplemented by media campaigns in order to get vital information out to the public. However, the opposition to the vaccines, mainly by the Church, tends to make the vaccine drives a news item in themselves.

In our research we identified that there is no active digital anti-vaccination campaign in Kenya. No specific organisation of any kind is actively churning out fake news about vaccines to a specific target audience.

In the absence of an active digital misinformation campaign or news coverage, vaccine misconceptions largely stay under the radar. This rapidly changes whenever a story is published. Sparked by news coverage, anti-vaccine sentiments tend to bubble to the surface and online commentary increases in comment sections on news sites and on social media. From this, we can conclude that the misinformation agent happens offline and the misconceptions appear online.

2. Politicians are emerging as influential misinformation agents about vaccines.

As the government wages a tug of war with the church over vaccines, the debate rapidly becomes political and invites other parties to weigh in on the matter. This is how an influential voice like ODM leader, Raila Odinga ends up holding a press conference to state that the tetanus vaccine led to the sterilization of over 500,000 women. This effectively makes the media a conduit for fake news. The data we collected shows how much conversation Mr.Odinga triggered by making one statement about vaccines.

Raila appears prominently in conversations about vaccines from news data gathered, garnering more mentions than even the Church.

Politicians wield large influence over Kenyans and having them actively participate in spreading misinformation about the vaccine could have far-reaching effects. Our research shows that very few politicians so far, have shared views digitally about vaccines. But as with everything in politics, this could change in an instant.

Apparently the Catholic Church had a point … tests show that three vials of tetanus vaccine can cause infertility.

3. Prominent coverage of misinformation agents by mainstream Kenyan media lends credibility to the information and spreads it beyond Kenya’s borders.

Kenya has become a leading case study among anti-vaccination communities around the world. Many have used information reported on mainstream Kenyan media to lend credence to their claims of vaccines as tools of depopulation. Videos of the Raila Odinga press conference on the tetanus vaccine were shared by anti-vaccine sympathisers across the world. The content has been used to create several videos on Youtube, with the most popular having over 93,000 views.

Infowars, the infamous conspiracy theory website founded by Alex Jones, also picked up on these claims and wrote an article and even did an entire video which is also available on YouTube.

4. Several members of the public often make attempts to correct the misconceptions of others that they see in the comment sections of vaccine stories.

Data collection: Historical Keyword data collection off of Twitter to do with terms relevant to vaccines
Facebook: Data collected from Daily Nation, The Star and Standard Facebook pages by mining stories to do with vaccines then collecting the comments in the comment sections.

Odipodev is a data analytics and research firm operating out of Nairobi. They can be contacted on team@odipodev.com