An Encounter With Blackness in Amsterdam 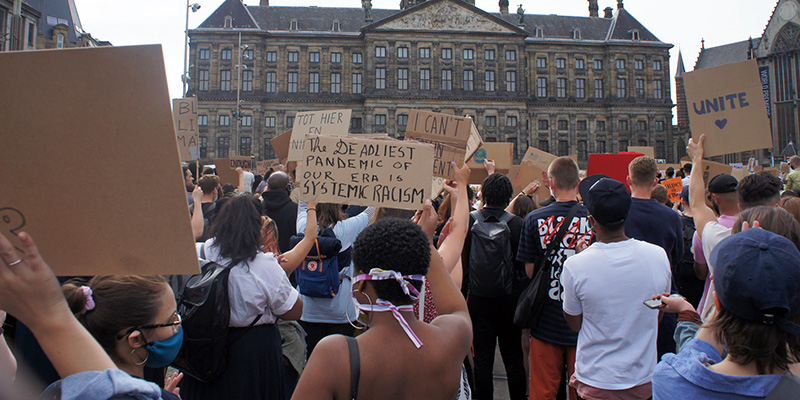 The Dam square, a major tourist trap in Amsterdam, is one of its busiest locations, often teeming with visitors flowing from the streets of Kalverstraat, Damstraat and Nieuwendijk in the heart of the Amsterdam canal zone.

Dam Square is within walking distance of the Red-Light district and the Amsterdam Central Station. On the east side of the tram tracks is the Amsterdam national monument, a prominent obelisk erected in 1956 in memory of the World War II soldiers, that I hardly noticed when I arrived in Amsterdam in September 2019 from Nairobi, Kenya.

Dutch historian, Leo Balai, author of the book Slave Ship De Leusden, noted that there are two stories of the Amsterdam canal zone. Amsterdam’s Golden Age in the 17th Century, is a story of pride and prestige but also one of astonishment shrouded in shame.

The Dam square is an architectural marvel that is of great historical significance to the makeup of the city. Built as a dam in the 13th century at the mouth of the Amstel river to hold back the sea, the city grew around it and the modern metropolis of Amsterdam would emerge from these origins. This square was considered the birthplace of capitalism when the 1st Stock Exchange in the world opened in 1611.

These were to be my impressions of Amsterdam’s history were it not for two significant events that happened in 2020. The first was the coronavirus pandemic and the second was the murder of George Floyd. The Dam square morphed into an intriguing site of conflated memories, depending on who you asked.

At the height of the coronavirus health restrictions in early June, I broke protocol to join a massive crowd that filled every inch of the square in solidarity with the BLM protests in America following the lynching of George Floyd in Minneapolis. Despite stringent public gathering restrictions, residents of Amsterdam showed up in full force. The gathering was in violation of the 1.5m distance rule and despite the pragmatic Dutch sense, it was impossible to observe the social distancing demanded by the organisers.

The protest, galvanised by a collective of anti-racism activists in Netherlands, attracted a multicultural crowd. Young Dutch nationals of all extractions gathered to listen to fiery speeches from a group of select speakers, the most prominent being the organisers of the KOZP (Kick Out Zwarte Piet, Black Pete) campaign in the Netherlands. All of the speakers were black. Activist after activist, reiterated the same message, Black Lives Matter in America and in the Netherlands too. An African American man who had lived in Amsterdam for 27 years, said this kind of black agency was unprecedented in the Netherlands.

Out of the many stories of the black experience in this country, it is the story by Jennifer Tosch, a Dutch cultural historian and the founder of the Black Heritage Amsterdam Tour, that enlightened me the most, being one of the few English speakers. I did not know that slavery was a central part of Amsterdam’s legacy. The city hall that overlooks the Dam square was built in 1648 and became the home of the Society of Suriname, established in 1683, when the city of Amsterdam became a share holder in the colony of Suriname.

A month earlier, another unprecedented event occurred in this same square. On the 4th of May, the king of Netherlands, Willem-Alexander, walked into an empty Dam square, to lay a wreath. (The 4th of May is a day of remembrance of fallen war heroes in the second World War.)

King Willem-Alexander asked for an apology pointing out that the profiling of the Jews started with a sign in the famous Vondelpark that said ‘No Jews Allowed Here’.

My Afro Dutch friends pointedly maintain that the black people of the Netherlands are still waiting for their apology. Presently many Dutch people like to say they do not see race and express great pride for being a society that espouses high social principles.

As an African categorised as a black person, it is easy to recognise racial undertones in a series of cultural mannerisms that define relations with non-white Dutch citizens. Perhaps none more jarring than the Dutch cultural phenomenon of Zwarte Piet, the helper of Sinterklaas, where white people traditionally appear in black face being the highlight of the festivities. This tradition is so deeply embedded in the Dutch cultural psyche that I have met several Afro Dutch citizens who grew up loving Zwarte Piet as a benign folk festival character, being none the wiser to the racial stereotypes it reinforced. In 2020, Prime Minister Mark Rutte stated that the government had no role in banning Zwarte Piet, which was described as a folk tradition, even as he empathised with the sentiments of those opposed to it.

As an African from Kenya, examining the demographics of the city, one can recognise institutional racism, based on where the black immigrants stay and how they slot into society as labour, basically essential workers on the lower tier. Europe’s black presence is tolerated as long as black people do not challenge the established status quo or as James Baldwin famously put it, “As long as you are good”.

Observing the largest gathering of black people I had ever seen in Amsterdam, I realised, their pain was familiar, yet we knew so little of each other, separated not just by geography and language but also a suppression of our stories.

In Africa, we identify with ancestry and nationality and typically develop race consciousness when we travel abroad and discover we are ‘black’. In the Netherlands, I was confronted with the politics of color and belonging. In my regular commute, I often ask black Uber drivers, if they are Dutch. Typically, the reply would be: “I am born and raised in Netherlands but my parents are from Morocco (Suriname, Aruba, Curacao or Ghana)”.

One generally identifies with where one truly belongs, all others just become labels, necessary for navigation in an unequal world. I see a generation of young Dutch who hail from immigrant backgrounds, grappling with nationalism of the country they were born. Where the notion of belonging is beholden to whiteness as the singular representative of authentic Dutch nationality.

In July, one month later, I returned to the Dam square, this time as a participant in a tour organised by Jennifer Tosch. She organises tours presenting the reality of Black experience in Amsterdam hiding in plain sight, in the built architecture as a testament to a memory from another time, a past hauntingly never really vacating the city.

It is fascinating to discover that just a little above eye level are symbols to the city’s past held in time. The tour starts at the Obelisk in Dam square where Jennifer points out that black contribution to the struggle against Nazi-occupation is notably minimised. The history of the Dam square is a tale of two peoples, one held glorious in time and another forgotten and erased.

Jennifer’s tours are borne out of her search for belonging, as a child of Surinamese parents who immigrated to America, and a desire to reconnect with her Dutch heritage. She was soon to discover that memories accorded to Black people of the Netherlands are sparse and only recently getting mainstreamed.

The tour involves an interrogation of Amsterdam’s architecture from the Golden Age and how the city remembers its black presence revealing how racial superiority can be built into architecture. Coming from Kenya, where colonial records were expunged and burnt, Amsterdam’s slavery heritage seems treasured as valued memory, representing an age of prosperity.

As Jennifer poses, what does one do with this knowledge? What does one do when one becomes aware of what these symbols mean and represent? In Dutch schools, like in Kenyan schools, the critical colonial history is scantly taught. It is more the reason why we need new stories to help us bridge these gaps in knowledge.

The aim of a story is to give root to cultural foundations but stories have to be true even when they are painful to recollect. Institutionalised racist systems are still a challenge given the various ways they manifest around the globe.

Our duty should be to challenge stories that have been weaponised against people of colour. The goal of solidarity is enhanced by access to stories that open up avenues for cross cultural perspectives on shared histories. As novelist Arundhati Roy noted, “There’s really no such thing as the ‘voiceless’. There are only the deliberately silenced or the preferably the unheard”.

The Black Heritage tour ends at Rokin street, a few metres from the Dam square. Here we are confronted with the tableau of a black figure on the gable of a city house facing the street. Jennifer tells us that it is the figure of a black moor owned by Bartholemeus Moor, who was a slave trader and original owner of the property. This is about all the information she has managed to gather on this individual so far.

I stare at this unknown figure and in it, I see a waking reminder of why we have to look back into our past with critical eyes. In the spirit of the Twi-Ghanaian tradition of Sankofa, look back for that which is forgotten to gain the wisdom and power needed to craft a new future.

This article was first published by ZAM Magazine.