Covid Organics: Towards an African Renaissance 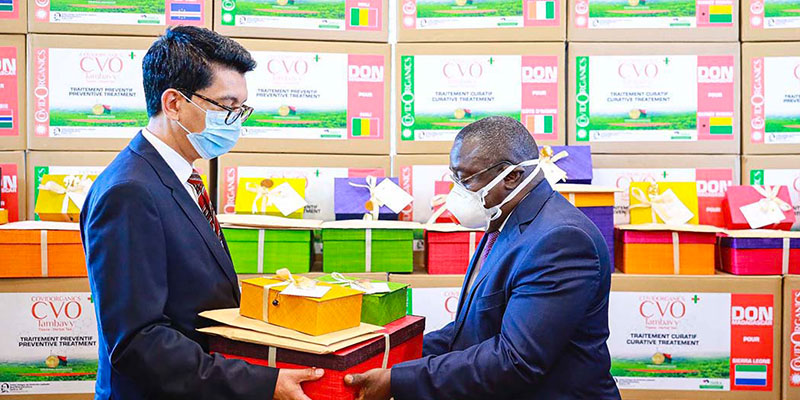 Unlike other former French colonies in Africa such as Benin, Cameroon, Democratic Republic of Congo (DRC), Senegal and Mali that have been acclaimed for placing the continent on the world map musically, Madagascar is not known for its musical prowess. The country pales in comparison to Cape Verde, that tiny island in the Atlantic Ocean that produced the gifted voice of Cesária Évora, and gave birth to Amilcar Cabral, the anti-colonial revolutionary and theoretician. But with the outbreak of a pandemic in the city of Wuhan during a Chinese winter that will forever remain etched in the annals of history, Madagascar has been dramatically thrust to the fore on the international stage.

Madagascar caught the world’s attention in April 2020 after announcing that it had made an extraordinary breakthrough in the field of (indigenous African) medicine. The Madagascar Institute of Applied Research (IMRA), which describes itself as “dedicated to biodiversity conservation and the discovery of drugs from natural products”, announced the development of Covid Organics (CVO) from the artemisia plant. Promoted as an herbal remedy that prevents and cures those who have tested positive for COVID-19, the drug has caused a sensation in a continent that has been marginalised by an international scientific community that views Africa as a spectator rather than as a player. But let me put a few things into perspective.

Long before CVO, the island nation’s flourishing plant life had been used for medicinal purposes, a tradition dating back to its pre-colonial days. The colonial epoch, however, disrupted this practice in order to introduce conventional medicine just like in other colonised African countries. In Madagascar, the practice was revived through the establishment of IMRA and deliberate emphasis was placed on the “value of plants in healing”, confirmed by the scientific tradition of investigating their chemical compounds to improve their efficacy. Remarkably, this revival began in the late 1950s when most African countries were on the cusp of independence and self-rule, with Ghana taking the lead (in 1957), and Madagascar and others following from 1960 onwards.

Political independence and self-rule coincided with the need to reclaim old practices and traditions that had been suppressed in the colonial era. The COVID-19 herbal remedy which continues to elicit excitement is, therefore, part of a long and rich African tradition that has resisted erasure.

Covid Organics comes against the backdrop of other encouraging and bold African interventions to combat various diseases that have plagued the world in recent decades. Before COVID-19, another viral disease stalked parts of West and Central Africa, resulting in more than 10,000 deaths. First reported in the DRC and in present-day South Sudan in 1976, the fight against Ebola has over the decades underscored the importance of the active involvement of local populations in deploying indigenous knowledge and remedies. Not many Africans are aware of the indescribable bravery of Sheik Umar Khan, a Sierra Leonean virologist who helped scores of Ebola patients before succumbing to the virus. Very few have heard of Dr Matthew Lukwiya, a Ugandan doctor who generated a substantial body of knowledge in the fight against Ebola before falling victim to the disease.

These few examples arguably contest the pervasive idea that conventional medicine and, to a large extent, western intervention are the only antidotes to African problems. The paradox in all this is the economic impoverishment of Madagascar, Sierra Leone and Uganda where a majority of citizens still live below the poverty line as compared to, say, South Africa, Nigeria, Kenya and Egypt. There are, of course, other factors that explain the economic differences, but the most important point here is that innovation tends to occur where the need is greatest.

No one epitomises this innovative spirit more than IMRA founder, Prof Albert Rakoto, whose earlier studies on the artemisia plant have contributed immensely to the development of Covid Organics. (The research on Covid Organics has been falsely credited to Jérôme Munyangi, a Congolese researcher.) Rakoto’s insistence on blending indigenous and conventional medicine is vital because it is likely to solve two problems with a single solution, retaining traditional medicine practices that are readily available within most African communities while adapting modern scientific trends to improve the effectiveness of plants such as artemisia in order to complement the strained healthcare infrastructure.

It is safe to say that so far Madagascar is reaping the benefits of its discovery if the coronavirus figures in the island nation are anything to go by. At the time of writing this article, the country had recorded 1,724 confirmed positive cases with only 15 deaths, and 732 recovered and discharged. The figures nearly mirror those of other former French colonies like Guinea Bissau and Equatorial Guinea which have reported under 20 deaths each so far, and are also the beneficiaries of the Covid Organics. Therefore, as the global pandemic continues to evolve, it will become increasingly foolhardy for the international scientific community to ignore this very interesting trend.

Recently, there have been thinly veiled attempts—mainly by western mainstream media outlets—to cast aspersions on the drug. Reuters described the herbal remedy as a “cure” , the quotation marks serving to cast doubts on the claims made by Madagascar about Covid Organics, while FRANCE24 brazenly and without batting an eyelid went ahead to call it “The president’s controversial ‘miracle cure’” in one of their news stories. Some of these problematic media framings go beyond the often false premise that nothing good can come out of Africa. Instead, they are part of a deliberate, but subtle ideological battle that persistently discredits anything African that might be of benefit to the world.

The use of the word “miracle” by FRANCE24 captures this vividly because it implies superstition – some irrational belief in the healing powers of the drug – instead of the deployment of homegrown science and logic in responding to a virus that has ravaged western countries more than any other part of the world. Some Africans have joined the fray in ridiculing the wonder drug, provoking a déjà vu moment reminiscent of Ocol’s infamous lamentations to Lawino:

We will round up
All these priests
[…] And herbalists,
[…] Dealers in poisons
Extracted from plants

The leading proponent of the drug is Andry Rajoelina, the wiry-looking Malagasy president with his signature toothy smile. Before he ascended to power, the 46-year old was an event organiser. He has progressively become the poster boy for the drug, and more importantly, for the shaping and reimagining the course of the African Renaissance. Through various interviews granted to media platforms, Rajoelina continues to insist that nothing will stop the continent from devising homegrown solutions to respond to local and even global problems. His memorable rallying cry was expressed during a television session with FRANCE24 when he asked: “What if this remedy had been discovered by a European country, instead of Madagascar? Would people doubt it so much?”

Rajoelina is not the first African to challenge the institutionalised racism that has plagued people of colour the world over since the advent of European imperialism. Pioneer pan-African thinkers and philosophers like Marcus Garvey, W.E.B Dubois, Malcolm X and Frantz Fanon dedicated their lives to fighting racism in a world that had been designed to minimise the contributions of non-white peoples. Accordingly, how did one reconcile with the nightmare that Dubois called “double consciousness”? The “sense of always looking at one’s self through the eyes of others, of measuring one’s soul by the tape of a world that looks on in amused contempt and pity” that currently informs the discourse on Covid Organics? Lately, Julius Malema, who leads South Africa’s Economic Freedom Fighters (EFF) party, has been at the forefront in challenging and questioning inherited ideas of self-doubt and inferiority complex that Rajoelina also now contends with. Malema, like Rajoelina today, has been a fierce proponent of Africa and has even called for the dismantling of colonial borders that prevent ease of movement and trade among Africans.

Despite not being geographically located on the African continent, Madagascar identifies as African, not just because of its significant Bantu population, but because of a growing continental pride, especially among the younger generation. In the last few years, the rise and rise of African music like afrobeats (West Africa), kizomba music (in lusophone countries), rumba (in Central Africa), bongo (in Tanzania) and gqom and amapiano (in South Africa) has galvanized young Africans to new forms of negotiating and asserting their racial and geographical identities within a globalised world.

Madagascar’s development of a herbal remedy for COVID-19 has become an extension of this ongoing negotiation with identity that constantly invokes the slogans Africa Unite and I am proud to be African. Therefore, its location several kilometres further into the Indian Ocean has not dissuaded the Malagasy people from identifying with the pan-African goal of a strong, unified continent ready to determine her own destiny.

There are, of course, those who may voice criticism that Rajoelina’s COVID-19 remedy is not enough to catalyse the important conversation of the African Renaissance, and that it is a passing fad that will soon be forgotten as long as COVID-19 continues to mutate. While this argument is valid, the critics fail to acknowledge that indigenous strategies of confronting diseases, particularly those that are viral, including HIV/AIDS, remain instrumental in instilling optimism and hope in a continent that has been battered by persistent narratives of despair and Afro-pessimism. Madagascar essentially provides the continent with a new incentive to sustain, for example, the debate around patents and intellectual property rights that have received scant attention from African governments. The island nation further acts as a symbolic incubation centre for creative, radical and innovative ideas that are not afraid to confront mainstream thinking (on matters medicine) in the 21st century.

Madagascar’s story has just begun and it will continue to follow the same trajectory as long as the beneficiaries of the herbal remedy recover from COVID-19. Western media stations will have to rethink their reporting on African issues because the old ways will no longer work. African sounds, not just music in the sonic sense, but the capacity to speak and be heard will increasingly become the norm rather than the exception. A deepening African consciousness, that in the past was considered an anathema, will progressively influence new ways of engagement between fellow Africans within and outside the continent and between Africans and non-Africans. It is highly probable that the engagement—time is on Africa’s side (considering the youthful population)—will always be of equals and not that of a master and subordinate. With Rajoelina and Malema and Bobi Wine and many countless others accelerating these pan-African conversations through music, art, speeches, and most importantly, home-grown science, Africa’s voice is set to soar.