Confronting Racism in the Shackles of a Miseducation 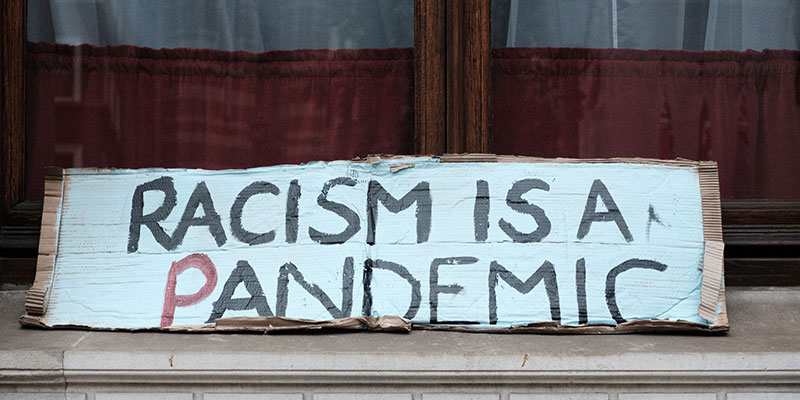 That was the title of the book and the subject of the exam.

Landscape with a naked man in the snow.

I cannot now remember the title of the course but I have kept the book and clearly remember the lecturer who taught it; a small, pasty-faced man with a balding pate and shifty black eyes. There we were, in his office on the second floor of the Faculty of Letters, Monsieur le Professeur behind his desk and me on the opposite side facing him, nervously ready to sit this oral exam. It started off well enough, my confidence growing as I responded to the lecturer’s questions.

Then out of nowhere, like a violent slap across the face, his beady eyes boring into mine, came this: “Tell me Mademoiselle, naked white men fascinate you, don’t they? Do you like the title of the book? What does it make you think of? You black people are really fascinated by us whites, aren’t you?” I sat there utterly gobsmacked, unable to conjure up any sort of response, in outrage or even in pretense at a smart literary comeback. Then Monsieur le Professeur seemed to snap out of it, dismissing me with a peremptory Vous pouvez disposer!

I left his office and stopped to stare out through the large bay windows that overlooked the square below, too stunned to immediately leave the building and join the throngs of students lazing about in the summer sunshine. I felt sad, mad, sullied, impotent. I knew I could lodge a complaint but how would I frame it? With what words? There had only been the two of us in that office so it would be his word against mine. Also, I was the only black female student in my faculty that year so I had no one to compare notes with. And besides, I knew I had passed the exam; otherwise, as was the custom, Monsieur le Professeur would have informed me that I would be taking a re-sit come September. Why then would I start a fight I wasn’t sure I could win?

Yet now I believe that this acquiescence, this doubting of self, this not fighting back, had been inculcated in me, and that I had internalised it well. I remember being in secondary school and the Mother Superior informing us that Africans were required to attend national celebrations at Uhuru Park. Africans. Not the Asians or the Europeans that were in class with me, many of whom were, at least from a citizenship point of view, as Kenyan as I am. Africans. Black. Everyone else stayed behind as we Black Africans made our way to Uhuru Park that day. We did not complain. I did not complain.

An Irish nun given to long digressions into her distant childhood in County Cork taught us African history. Apartheid and Bantustans came up, a map showing the various desolate locations to which black South Africans had been relegated pinned to the classroom wall. Yet I do not remember any sense of outrage on the part of the teacher. Or on the part of us students. Kenya’s colonial history, with its native reserves, its racism and its violence, was certainly not taught. It was a time to forgive but never forget, we were constantly reminded, the not forgetting bit invoked as an after-thought, sotto voce.

And nor was Kenya’s painful history invoked at home; we were not a political family by any measure. The parents worked and the children went to school and did what was expected of them. Only much later did it occur to me to wonder what it might mean for my family that my grandfather had been a chief in colonial times.

We learned to recite Shakespeare, and became intimate with the Mayor of Casterbridge; the English classics held no secrets for us. I fell in love with the language of love, taught to me by one Mrs Kiprono (why on earth would anyone study Swahili?) and flew off to take a degree in Romance Languages the minute I could. And thus did I come face to face with my miseducation.

I had been on campus a year, struggling to dominate the language of Molière, when the time came to renew my student residency permit, having done well enough to progress to second year. Of I went to the immigration desk of our local authority one October morning, joining a line of foreigners there for the same reason when, suddenly, up at the top of the queue, a young black man lost it. “What?! I am exploiting the Belgian taxpayer?! Do you know how long we Congolese suffered under your rule? Do you know that we built this country? Do you know what King Leopold did to us? Do you? Well, if you think I’m profiting from you I haven’t even started yet Madame! I have come to repatriate what you took from me!”. Apparently, the prim madam attending to the queue had questioned his motivation to remain in Belgium since he had failed his year but the young Congolese man was having none of it; he threw a monumental, show-stopping fit and got his residency renewed there and then. I had never witnessed anything of the sort before. I realised there was another whole history out there I knew nothing about.

That young man made me feel emboldened and when, some time later, a couple of cops jumped dramatically out of their patrol car in that neighbourhood of Brussels known as Matongé—on account of its numerous Congolese businesses—and barked, “papiers!”, at Jean and I, clearly hoping that we were undocumented illegals, we laughed in their faces as we handed over our student IDs. A young female lecturer of African descent recently arrived at the department of history had me transfixed when she took on a white professor at an international students event. In his cravat, floppy hat and carefully cultivated air of the worldly dandy, the prof had been waxing lyrical about his time at the Université Lovanium in Congo-Kinshasa, practically working himself into a state of ecstasy at the recall of the beauty of Congolese women dancers during faculty parties. Her “je danse, donc je suis?”, I dance, therefore I am?, abruptly put paid to that self-indulgent, paternalistic, walk down memory lane.

The scales had fallen from my eyes and I had come to the painful realisation that I had been lied to and that things were not as they seemed. I started reading properly, discovering the works of Cheikh Anta Diop and promoting them with the zeal of a recent convert, once eliciting the comment of a white friend that he would henceforth have to regard me in a totally different light, now that he was having to contemplate the notion that Africans had entire civilisations behind them. I was astounded.

A first full-time job after graduation brought me into the world of trade unions, a world where I expected that the rallying call—“Workers of the world, unite!”—excluded racists from the ranks of its diverse membership. That is until I found myself sitting between two Italian delegates to whom I was providing consecutive interpretation when a white speaker, referring to Namibians, ejaculated: “But these people are animals! You can’t do anything with them!”. (The man had a contract to undertake trade union education among the said “animals”.) I could not translate that statement, did not know what to do with it even as the two Italians kept asking me, “What did he say? What did he say?”. The meeting broke up in pandemonium.

I moved jobs a while later and found myself working under a Belgian director who liked to advance his reputation as a friend of Africa and Africans, holding court in his office through the doors of which hopeful African immigrés would flow, many met in the African nightclubs Monsieur le Directeur liked to frequent. Which did not dissuade him from treating very ill a young man to whom he had offered a job as his PR man, holding him by the contractual balls and giving them a squeeze every so often, just because he could. That young man eventually lost his job. And his mind. He was Congolese.

I cannot claim to have been a victim of the odious, brutal racism of the kind daily suffered by – predominantly – African American men in the United States. The racism I encountered during my time abroad was of the insidious kind, the kind that lets you in through the door and feigns to accept you as an equal while reminding you that “the hand that receives is always beneath the hand that gives”, as one senior manager, a Frenchman, put it to staff to justify why African beneficiaries of international development cooperation largesse needn’t expect to have their views taken into serious consideration in the execution of a project.

In the meantime, other books were published. Like King Leopold’s Ghost, a quick primer on the brutality of the agents of King Leopold II in the Congo Free State. My heart went out to the Congolese after that one. Or the horrifyingly detailed Britain’s Gulag, which at first I was unable to read to the end; the torture casually perpetrated in the Kenyan concentration camps by the colonists and their local collaborators was beyond anything I could bear to know. It took ten years for me to go back to that book, and to start asking questions about that time. I was shocked to learn from an aunt now in her early 70s that she knew of women who never did get married, could find no one to marry them, because they were daughters of known Ngati, the Kikuyu Home Guards that did the colonial government’s dirty work.

There was still the question of my grandfather who had been a chief in those times. I loved and revered that man, and did not want to have to contemplate that he might have been a party to the suffering visited upon Kenyans by the colonial government and its craven collaborators. And so I did not probe. Then, quite by chance, I fell upon The Swords of Kĩrĩnyaga: the fight for land and freedom, a book written by H.K. Wachanga, a former freedom fighter and, in those pages, I learnt something about my grandfather that freed me from the fear that my family had been on the wrong side of Kenya’s history.

[W]e met the Muhĩto Location Chief, Jeremiah Kĩnyua s/o Kĩru. He was a most unusual chief, because he had taken the second Mau Mau oath. He warned us that the government was searching for Kĩmathi, Mathenge and myself. He said Kimathĩ and Mathenge were to be tried for murder and that I was to be detained. He implored me to escape to Nairobi and hide there.

I learnt very recently from a contemporary of my grandfather’s that his chieftaincy was short-lived. Jeremiah Kĩnyua son of Kiru would not commit exactions against his people, and eschewed violence and corruption. And so he was quietly removed, never again to hold public office, living a dignified life and dying an honourable death four years shy of his 100th birthday.