Government Money, Artistic Freedom and Integrity in the Time of Coronavirus 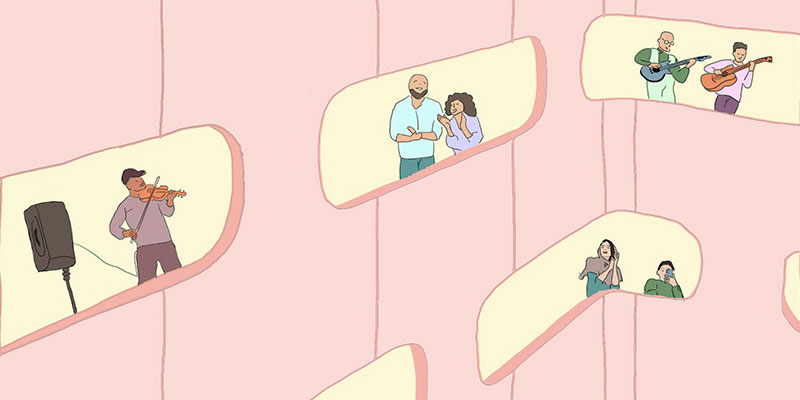 The government’s ban on public events following confirmation of the first COVID-19 case in Kenya more than two months ago has put a strain on artists’ livelihoods. Visual and performing artists are struggling to earn a living. Kenya’s art scene has taken a hit with emerging artists suffering more than established performance artists, some of who have had the wherewithal to give live shows online.

In response to the economic crisis that has hit the creative industry, the Cabinet Secretary for Sports, Culture and Heritage, Amina Mohammed, released a stimulus package for artists following a presidential directive issued in early April to allocate KSh100 million from the Sports Fund to artists, actors and musicians during the period of the COVID-19 pandemic. From the President’s carefully worded speech, it was not clear whether the main intention of the allocation was to cushion the artists against the economic impact of the government restrictions or to make use of the artists’ talents in shaping its messages about the pandemic; in his speech, the President alluded to both intentions. Subsequent statements and press releases from the Cabinet Secretary and relevant dockets under the Ministry of Sports, Culture and Heritage revealed that artists would have to earn the right to the stimulus package and that it would not be a gravy train for “freeloaders”.

But who exactly could be viewed as a freeloader in these hard times when performing artists’ revenues have diminished as a result of the ban on public events since the social restrictions aimed at curbing the spread of COVID-19 were put in place in April? Many Kenyan musicians were already struggling financially before the COVID-19 outbreak and with the government-imposed restrictions you can imagine what such artists have had to go through over the past three months. With bills to pay and barely any revenue coming in but a meager trickle of royalties whose amounts have been questioned, most Kenyan musicians are stretched to the limit.

As a recording and performing artist, I cannot recall a day when my landlord gave me a rent waiver or a free meal at any of the recently reopened restaurants merely because I might have released a great song. Not that I am entitled to such privileges; the point I’m trying to make is that the payment of bills is never in kind and this begs the question how and where a musician can now earn their keep after more than two months out in the cold. In my case, class privilege clearly supports my art. Also, I have a couple of side-hustles – my writing and the social science research gigs that I do. And when all else fails, I can fall back on a support system of family and friends, most of whom also come from a relatively privileged background.

My side-hustles and support system are a clear case of class at work; the university degrees I have, the friends I made in those universities or in other spaces that were accessible to me because of my networks are also a product of my class. This standing places me in a more favourable position than many other artists and yet living off my art is something that I still struggle to achieve. But what of those who may not enjoy the class privilege that I do? Where will they get the money to give them the much-needed stability – food and shelter – to be in a position to write and record the music that could give them access to the stimulus package?

Much as the offer by the Permanent Presidential Music Commission to give free studio time to artists is laudable, their survival in this period is a more pressing concern especially now that some not only have to put food on the table for themselves and their families but as tenants, may also have to contend with pressure from their landlords.

But if we are to overlook the artists’ plight and argue that the government can only meet the artists halfway, one can only imagine the desperation that could push a musician to make music merely in order to receive the financial support. In addition to the time and energy expended to make a song, a more insidious cost would have to be incurred by the artist in order to be considered for the so-called stimulus package – their artistic integrity, independence and imagination.

Granted, it would be somewhat crass and borderline tone-deaf for an artist to produce content that does not speak to the challenge of the season – the COVID-19 pandemic. That would be the use of artistic freedom as an end in and of itself, art for art’s sake, a concept I find selfishly liberal as it ignores the obligations that an artist has toward society, particularly at a time when our society’s well-being is not only threatened by the pandemic but also by the government’s response to the pandemic. What should be challenged, however, is the interest of the Sports, Culture and Heritage ministry, representing the government, in providing a questionable content-template to serve as a guide for the issues that artists should speak to in order for them to be eligible for government patronage. The artists’ creations will further have to be subjected to a vetting process by a panel of government appointees.

The tenor of the Sports Ministry’s press release calling for works of art as well as the Cabinet Secretary’s words in an interview with a local Television Station indicated that, in making their music, musicians are to convey messages of hope and, more significantly, trumpet the directives of the ministry of health in response to the pandemic. But what of the other issues that are germane to the pandemic and that deserve the public’s attention? Will the ministry compensate artists who compose songs about the inhumanity of the police-supervised demolitions of the homes of Kariobangi North residents that were carried out in defiance of a court order in the middle of the longs rains and during a pandemic? What of the Ruai demolitions undertaken in the thick of night by the same government or the killings of citizens during the enforcement of the curfew imposed to curb the spread of the coronavirus? How about the loans taken out by the government which Kenyans will eventually have to pay? Will it provide financial relief for artists whose works would portray the inhumane conditions some households have had to endure during this period due to the inequality caused by historical injustices of which the president’s family is a beneficiary?

Are songs of hope and ministerial directives the only way to move a society forward in times of crisis? What of blunt, sobering truths? When the Cabinet Secretary calls on artists to make songs that convey messages of hope, messages that would increase the artists’ chances of securing financial support from the government, it is implied that the songs will be silent on those messages that do not inspire hope. It is implicit, from the words of the Cabinet Secretary, that these silences are necessary in securing the promise of a better tomorrow for Kenyans. But what do we know of silences? Ernest Patrick Monte’s 2017 article “Romancing the nation, effacing history: reading Kenya through patriotic choral music”, says:

Patriotic choral music can therefore be read not only reflecting the culture of sycophancy but also contributing towards it. Consequently, not only what songs say, but what they leave out – the very silences in the songs – frame the music to serve purposes of propaganda.

The stimulus package is clearly driven by a Machiavellian policy rather than humanitarian considerations. The government would rather have artists vomit sunshine than share harsh, inconvenient truths about some of its excesses during this period. The government’s intention is not to cushion the artists but to stifle critical narratives while using their talents to drive the government narrative. The government’s use of state resources to bolster its message presents many desperate artists with a Hobson’s choice – either produce music that toes the government line or forgo the government’s largesse. Given the desperation of many of our artists, the former will be a more appealing alternative – a compromise that even politically progressive artists may have to make to put food on the table and maintain a roof over their heads.

In Kimeru, we say Nkea iti maruru ii metho aki ituniakaia, a poor person has no pain, they can only strain their eyes. Artists will have to accept the “deal” in spite of themselves. With their livelihoods threatened in this season of coronavirus, many artists are likely to jump at the “opportunity” that the government has provided, an opportunity that will not only come at a cost to them but also at a cost to the public. The public’s attention will have been diverted from such harsh realities as police brutality and demolitions but which at some point it will still have to reckon with because they will continue to occur.