Tributes to a Great African Mind: From Nyong’o, Mutunga and Shivji 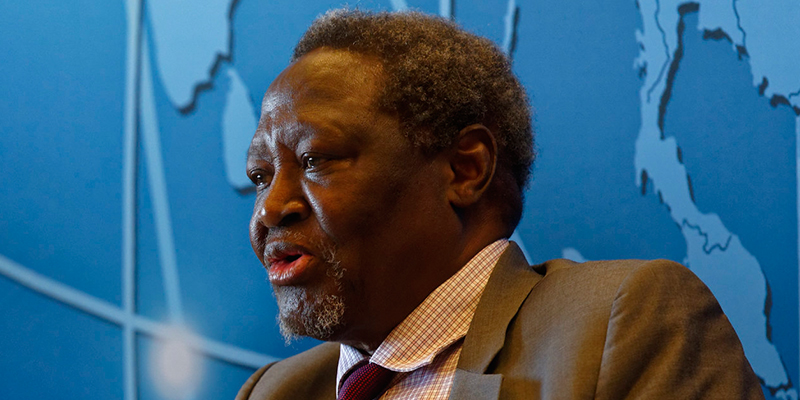 I remember one weekend in Dakar, Senegal, when Thandika and I had had a long afternoon talking and having some beer in his apartment. We were discussing Marxist approaches to the study of African politics which Thandika thought was rather deficient, with “everything being reduced to relations of production however poorly understood.” The year was 1979, and the African Institute for Economic Planning and Development (IDEP) was at its highest point of radical intellectual firepower, headed by Samir Amin, the eminent political economist of the “accumulation on a world scale” fame. The Council for the Development of Social Science Research in Africa (CODESRIA) had just been born literally on the ribs of IDEP, headed by Abdala Bujra, the well known Kenyan anthropologist. Thandika straddled between the two institutions, subsequently succeeding Bujra to ensure that CODESRIA became the springboard for most young African scholars as astounding social scientists.

I remember that afternoon very vividly. Thandika was full of innovative ideas and impatient with some pedantic social science scholarship on the African scene. I was surprised Thandika had hardly published on any of the innovative ideas he had which he expressed so convincingly. So I challenged him to stop being a typical African in love with the oral tradition and begin writing and publishing. It did not take long before he hit the road, leaving me miles behind in a very short time. Not long ago Thandika sent me the following mail:

“Here is an article I recently published in World Politics. Remember it is you who once challenged me to begin writing when we were in Dakar. I will never forget that.”

The article was on “Neopatrimonialism and the Political Economy of Economic Performance in Africa: Critical Reflections” (World Politics, Vol. 67, No. 1, January 2015). I found this article perhaps one of the best analysis and critique of development theories in Africa, debunking theories of those who view the state as a pariah in Africa. Those who lump all African heads of state and government as “big men” out to eat state and society to the bone didn’t sit pretty with Thandika in this article either. Seeing the future of Africa as foretold, doomed and bereft of any meaningful development almost for ever is something that could pass as propaganda but not social science. On 25th of October 2013, Thandika wrote me as follows:

“Early this year I met Willy Mutunga (later our Chief Justice) who reminded me of a meeting at your house where we drafted the principles of the Kenyan constitution. It is nice to see some things come true.”

Neither Willy nor I worked on these principles with any idea that after the constitution was promulgated we would occupy the positions that we eventually did. Thandika was, of course, miles away only to be happy eventually that his contribution to our struggle eventually paid some dividends in Kenya’s social progress.

That is why Thandika could never accept a “one shoe fits all” view in of Africa’s political economy. Not all African middle classes are “comprador” nor are all African states dependent in the same way on external forces. Class relations are historically given within social formations which can be subjected to analysis by the same theoretical models of political economy that are capable of bringing out their similarities and differences. This comes out very clearly in Thandika’’s World Politics article I have referred to above.

When I was writing the “Introduction” to a book I recently published on “Presidential or Parliamentary Democracy in Africa: Choices to be Made”(Nairobi: Booktalk Africa, 2019), I remembered that sometime in the mid-nineties, when we met as young Kenyan academics to discuss how we could advance the democratic struggle in our country, Thandika happened to be among us. As usual, he was always very ready to contribute productively to such discussions. We were so sure that the Moi regime was the only impediment between us and democracy.

But Thandika, always ready to be an intelligent gadfly at such times, posed the question: “Have you people thought about what kind of government you want to put in place after Moi which will be acceptable to the Kenyan people and which will achieve the democracy you seem to be looking for?”

From this statement one can see where Thandika’s theory of the “national democratic and developmental state” as a progressive alternative to the presidential authoritarian regimes of the Moi type came from. He had a deep commitment to democracy rooted in popular acceptance by the people because it is, among other things, capable of paying democratic dividends.

On a light note, we used to drink a beer in Dakar called “flag”. For Thandika, these letters stood for “Front de Liberation Alcoholic de Gauche.” We were definitely leftist Africans committed to the liberation of our continent. But we were not always drunk!

P. Anyang’ Nyong’o is a public intellectual, educationist and is the current Governor of Kisumu county.

I have this great photograph of Thandika seated next to a dosing Peter Anyang Nyong’o. The two of them gave us a brilliant discussion on the ideology, politics, and economics of constitution-making. Thandika was wide awake through out. When Peter woke up he amazed all of us by responding to Thandika. This is the only time I have witnessed geniuses at work, one with his eyes wide open, and the other with eyes closed. The major difference between the two was not just the status of their eyes. Thandika was persuasive, calm, patient, always smiling, a present-day Socrates, and the very nemesis of what we used to call in Dar “academic terrorists.” (Let me be clear I do not believe Peter was one of those, but he can be at times intellectually intimidating and arrogant!). That Model Constitution owes a lot in its content to the advice both professors gave us. That critical education has accompanied me in my various careers. I have come to frown upon the lawyers professional refrain and brag that we are learned when we are, indeed,  very ignorant of other disciplines that are foundational to our discipline. Thus I have come to value multi-disciplinarities and inter-disciplinarities.

This encounter was long before I read Antonio Gramsci, the Italian exemplary revolutionary and philosopher who spent 10 years in Mussolini’s fascist prisons. We now know that Gramsci in his Prison Notebooks developed the theory of the organic intellectual, the intellectual Jan Ziegler in Foreword to Yash Tandon’s book, Trade is war: The west’s war against the world writes, “who, through his analyses, his visions, becomes an indispensable auxiliary of social movements.”

Thandika was an organic intellectual. He has died. However, his vision, writings, analysis, and his intellect are all immortal. He has, along with my other teachers (Issa Shivji, Karim Hirji, Ngugi wa Thiong’o, Micere Mugo, Angela Davis, Wangari Maathai, Yash Tandon, Paul Zeleza, Alamin Mazrui, Dan Nabudere, Samir Amin and many others) fundamentally educated me in the social movements I have been in since the 1990s, and in my careers outside those social movements, through his writings.

As we envision Africa and a planet that is just, peaceful, non-militaristic, non-violent, ecologically safe, equitable, prosperous, and socialist, Thandika’s immortal work will be among those that will help us resurrect radical Pan Africanism, think through a new free and emancipated Africa, and a new world without neoliberalism.

A renowned and well-respected Pan-Africanist intellectual, Thandika Mkandawire, joined the ancestors on 27th March 2020 in the early hours of the morning. Sadness enveloped his colleagues, friends and the African intellectual community at large. Issa Shivji could not find prose to express the loss – he just jotted down these words (a poem?) in Kiswahili on the same day. Ida Hadjivyanis translated it to English.

***
Thandika our beloved
We are grieving
The mat is laid for mourning.
Thandika smiles:
O Issa, why this mat!
Celebrate life
Death is but an interruption
Let it not unsettle you all
The struggle must continue
To liberate Africa
To Unite Africa
To create that alternative civilisation
That overflows with justice and equality

Prof. Issa G. Shivji, author, poet and academic, is one of Africa’s leading experts on law and development, presently occupies the Mwalimu Julius Nyerere Research Chair in Pan-African Studies of the University of Dar es Salaam.