Life Upcountry in a Time of Coronavirus 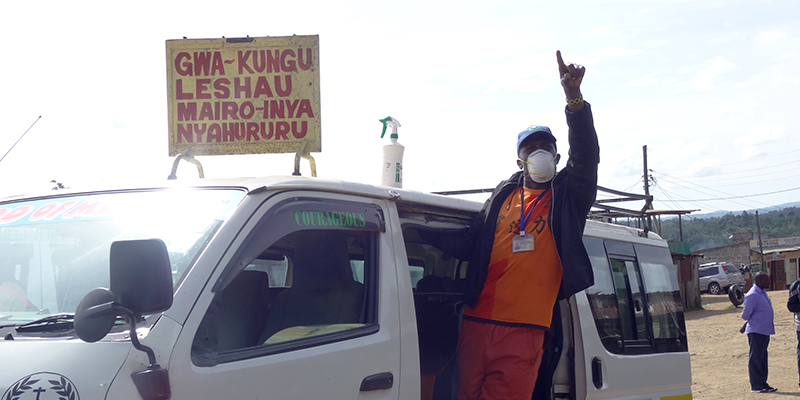 It’s ridiculous I know, but I have been reduced to hoping that the lady I met at an agrovet in Nyahururu town last week is right after all, that above all other peoples of the world, God loves Kenyans the most. She made this extraordinary statement when I hesitated to shake hands with her, citing coronavirus fears and pointing to the critical situation prevailing in Italy, which had gone into lockdown in an attempt to contain the pandemic. “We shall be ok, God will make sure of that because he loves us very much”. More than the Italians? Much more!

A few days later, a retired veterinary officer of my acquaintance came to have a look at Dolly-the-calf; the girl had weeping eyes and I was a bit worried. Upon arrival, the vet found me on the phone and I was able to avoid shaking his proffered hand by vaguely waving at him instead. He was clearly miffed and took off in the direction of the cow pen before I had got off the phone. When the vet was done with Dolly, I explained to him that I had not meant to be rude but that avoiding shaking hands and keeping at a distance from each other was the recommended thing to do but he pooh-poohed me and said that those were problems of Nairobi people. Here in mashinani we were perfectly safe from the virus, he said.

The following morning, as I was driving off to run an errand in the next township, I was waved down by a woman who looked vaguely familiar to me and, thinking she wanted I lift, I stopped. The woman came straight at me, grabbed my hand, shook it vigorously and proclaimed, “Praise the Lord! We will not die! The Lord is with us!” What could I say?

I live on the edge of a small township, about 30 kilometres from Nyahururu town, which nevertheless boasts a Level 3 health centre complete with a maternity ward and a functioning ambulance. The township is also host to many churches of various denominations; I have counted ten, including three of the main established churches, within less than a square mile. Sunday mornings used to be a competing cacophony of hallelujahs and hello-hellos as the pastors in their tin-shack churches tested their microphones before blaring out their summons and silencing birdsong. But a quiet word with the sub-chief seems to have worked and the noise has largely abated, with the loudspeakers back inside the churches and the volume significantly reduced. This is a largely church-going community and the arrival of the coronavirus in Kenya had not changed that in any significant way. When I enquired with the pastor of my church about the measures he was taking in the face of the COVID-19 crisis, he informed me that handwashing facilities would be placed outside the three entrances to the church and that the service would be shortened. Otherwise, life was continuing as usual.

Well, news of Nairobians beating a hasty retreat to their homes in the Kenyan countryside – or at least to the homes of their parents and relatives – has got me worried that the virus is already lurking among us, shortly to manifest itself to devastating effect. And so, being a mild hypochondriac, and convinced that the slight tightening in my chest does not augur well, I have decided to commune with my God from the relative safety of my house and compound.

Born and bred in the city, I came to live here a few years ago armed with a copy of John Seymour’s The Complete Book of Self-Sufficiency, a highly romanticised view of country life, no practical skills and absolutely no knowledge of farming. But I have endured and could remain behind my gate for a couple of months, living off my vegetable patch, my maize reserve, Daisy’s milk and the eggs from my chickens. The rains have been unseasonably generous and the locusts flew high up above our heads a couple of weeks ago, headed south, sparing us that particular scourge. How the market traders will fare is what I’m wondering though. Last Saturday morning county officials did the rounds of the township and asked the market traders, who flow in from the surrounding countryside and neighbouring townships twice weekly, to pack up their wares and leave.

Those who sell second-hand clothes can always store them until the Wednesday and Saturday market days are reinstated – whenever that will be – but what will the vegetable sellers do with their stock? And how will the traders get by if they cannot trade? I buy avocados from Mama Wangari who recently introduced me to her last-born daughter, a charming girl who, against the odds, had done extremely well in secondary school and was hoping to enter university to study pure mathematics. Her mother is the family’s sole breadwinner and sending Wangari off to college was always going to be a challenge. Given the uncertainties linked to the coronavirus pandemic, the odds of Wangari sitting in a lecture hall any time soon have just diminished.

The shops remain open for the time being but business is bound to suffer without the custom of those people who come into the township to trade and buy goods on the weekly market days. Bars have already taken a direct hit and those who like their tipple will have to take it in the comfort of their homes. The police did the rounds of the local watering holes last Sunday night, supervising the ordering of last rounds and, on the stroke of midnight, all bars in the township were closed until further notice.

Soap and water dispensers have been placed outside most shops and the grocery store that my city nephew refers to as The Mall – on account of its having two tight aisles and a large assortment of juices – is well stocked in toilet paper, although I doubt its sudden disappearance would cause as much distress here as it would in the city; maigoya (plectranthus barbatus leaves) are in plenty along the hedges. Prices of goods have already gone up, however; a kilo of sugar that I bought at SH95 last week is now trading at Sh105, a two-kilogramme packet of a popular brand of maize meal that was going for Sh110 is now selling at Sh140 and my butcher tells me that the number of customers crossing his threshold has diminished considerably in the last week.

Esther Wa Tu-Twins called me early this week, enquired after my health and assured me that she and her children were equally fine. We talked about the rain the night before, and how the patch of maize that she had recently planted was doing. Then she came to the point of her call and informed me that her store of maize meal was finished and she couldn’t find any work. Esther and her family of five – four children and a younger brother in her care – are among the 4,000 families that were resettled by the government at the Makutano Internally Displaced Persons (IDP) camp in Laikipia West following the 2007-2008 post-election violence, a region where the rains are uncertain and the hunger season long most years. Esther’s crop of maize and beans is still some months to harvest and the coronavirus pandemic has only come to compound an already serious problem for her family.

The police are also back on the roads, white masks over their mouths, ensuring that matatus are respecting the directive to carry not more than eight passengers and booking recalcitrant crews. It had been a relief for many, not least the boda boda riders, when the police were ordered off the roads in an attempt to put a halt to the rampant bribe-taking. (A pair was recently been discovered hiding in the bushes along a dirt road from which they would suddenly emerge at the approach of a boda boda, hoping to cow the rider into surrendering a bribe. Their business was short-lived, however; our boda boda community is no longer prepared to put up with that nonsense). Matatu fares have gone up though; a trip into Nyahururu town, a distance of just under 30km, will now set you back Sh200, a 100 per cent increase. And it is expected that shortages of diesel and petrol are soon to be experienced in my neck of the woods; a friend called me with advice that I should tank up and limit my movements to the absolutely necessary. I have no plans to leave my compound any time soon, however, so that quarter-tank remaining is sufficient for any emergency that might cause me to venture beyond my gate.

It has been barely two weeks since the first case of coronavirus was detected in Kenya yet the ramifications of the pandemic are already being painfully felt within my community. May the prayers of the woman I met in Nyahururu be heard.