They Call it Shalom 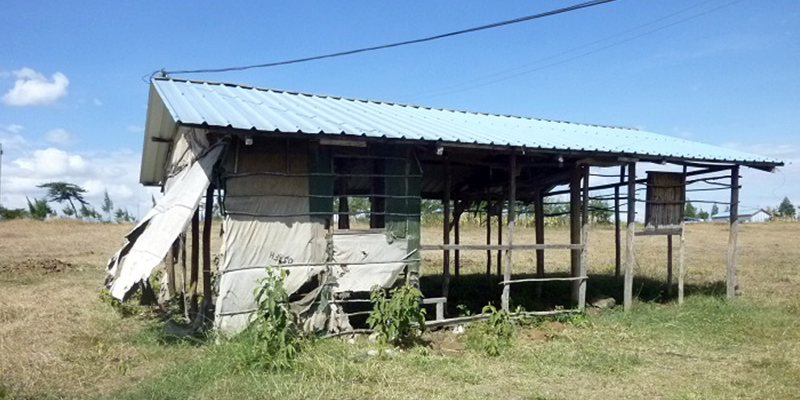 They call it Shalom. Peace. A vast plain in Laikipia East dotted with United Nations-blue corrugated iron roofing. The people who live here used to live elsewhere until the somnolent demons of tribalism woke up in December 2007. They had lived in Burnt Forest, Kipkelion, Kuresoi, Kitale, Kapsabet, Koibatek, Mogotio, Nakuru, Eldoret, Molo, Subukia, Nandi Hills, Kaptembwa, Eldama Ravine, Timboroa, Koru, Mau Narok . . . places with beautiful, evocative names. They had made their homes there over decades, generations even, raising children and farming their own land. Or renting housing and working for others. Running businesses.

Then, suddenly, they were not welcome any more, chased away by marauding gangs of their once friendly neighbours, escaping with only their lives (when they could), and the shirts on their backs. Their names are Wangari, Barasa, Wanjiru, Kwamboka, Wangui, Mugo, Muigai, Wagichohi, Rioba, Kariuki, Kombo, Nyaboke, Robi, Twethaithia, Karema, M’bwii, Otsiro . . .

They endured the hell that was the Nakuru showground, where many had sought refuge, and survived the punishing cold at Mawingu, high up in the clouds over the Aberdares, where the piece of land they tried to settle on proved to be too small to contain them. Years went by, children became young adults and parents died of illness or despair. Yet they endured, organised, lobbied, and finally—after years of homelessness—found themselves resettled at the Makutano Internally Displaced Persons (IDP) camp on land purchased by the government from a family of wealthy landowners.

A bunch of bureaucrats well ensconced in their important offices had taken the executive decision to organise the IDP families into four villages, creatively naming them Villages A, B, C and D. Each family in each village (there are around 1,500 families in the whole of Shalom) was given a quarter of an acre of land on which to establish a homestead. To this end, each family was provided with building materials in the form of 20 UN-blue corrugated iron sheets, wood for the trusses and 25 poles to hold the whole thing up.

The IDPs had to use their own resources to finish building the houses: for the external walls, they used the plastic tarps under which they had been living in Nakuru and at Mawingu, or whatever bits of carton, wood and sacking they could salvage. The government also brought electricity right up to every homestead—which is presumably why the families had been organised into villages in the first place—but, alas, the vast majority couldn’t afford to properly finish their homes, let alone pay for the luxury of having electricity to light them.

Each family also received two acres of land on which to farm. These two acres are not situated next to the homestead but somewhere else on that vast expanse of grassland, making it that much harder to fructify the land. Something as simple as keeping backyard animals and using the manure for fertiliser becomes impossible; finding fencing material is a challenge in this treeless landscape and keeping animals—both domestic and wild—away from the crops a constant fight.

Not that there is much agricultural activity taking place at Shalom. Finishing the family home was always going to be the priority and, having arrived with nothing in the pocket, money must be found to keep the family fed and, eventually, properly housed. Yet there is little work to be found here, your neighbours being in the same situation as yourself. Going further afield means walking for miles and earning Sh200 at the end of six hours of work if you are lucky, enough to buy some maize meal and a handful of greens.

You could always start a kitchen garden – and many do – but the rains are erratic here and the water from the two boreholes that feed the four water points in the four villages is saline. A well-meaning NGO did finance the digging of small water pans in some of the homesteads but these have not been of much use. The pond liners were not suitable and started leaking. Besides, the pans were a hazard to small children often left alone at home while parents went looking for their daily bread. And so they have been drained and abandoned.

Yet the resettled at Shalom are not completely forgotten. Indeed, they are every so often remembered when it is politically expedient.

I was running an errand for Isaac in Village C when I was waved down by Wa-Lillian, a grandmother of three orphaned girls. She thanked providence for sending me along just as she was about to give up trying to walk all the way to Makutano, a motley assortment of small businesses on the Nyeri-Nyahururu road, a couple of kilometres up a gentle slope. Wa-Lillian had been poorly of late and it would have taken her the better part of an hour to get there. As we drove up to Makutano, she told me that, together with other elderly women living in Shalom, she had had her name put down to receive a Meko, a combination gas burner and cylinder of the type one might take on a camping trip. Deputy President William Ruto was the eagerly awaited benefactor.

Shalom is in my neck of the woods, a few kilometres down the road and over the Nyandarua-Laikipia East border. I would have known nothing of it, would have had no reason to go there, were it not for Isaac. They used to call him Karaka because of the clothes he wore – a medley of rags that he had learned to stitch together with needle and thread from a young age to avoid going altogether naked. His father, under whose care he had been left when his mother returned to her people, was already an old man when Isaac was born, an old man whose only conversation were the stories he told about the Mau Mau and the war for Kenya’s independence, and whose parenting was limited to ensuring that Karaka never went hungry. Somehow, despite the grinding poverty, Isaac went through high school and left home to make a life for himself and, many years later, we met when I moved to Ndaragwa where he was now the project manager at a children’s home.

But even as he was going up in the world, leaving behind the poverty and want of his childhood and finally finding a steady, salaried job, Isaac also took up his true calling as a missionary among the people of Shalom. He would solicit material donations from well-wishers that he would then distribute to the neediest of the needy at the Makutano settlement, all the while offering them words of comfort from his Christian faith. And so it was that I once went along to help him ferry foodstuffs and clothing and came face to face with the grim reality of the lives of the victims of the 2007/2008 post-election violence.

Kariuki, whom we call Karis, is a tall, gangly fellow somewhere in his late thirties or early forties. When I first met him, Karis was living in a one-room hovel built with the government-issue UN-blue corrugated iron sheets and wooden poles, with black plastic sheeting for the walls. He slept in there with his one goat, his few straggly chickens and the ghosts of his wife and children who were murdered in the post-election chaos. Karis has a green thumb and, despite the water challenges, he had planted a promising kitchen garden from which he gifted me a handful of soybeans when Isaac and I passed by with some maize meal and porridge flour.

Much further down the road from Karis, at the furthest end of Village C, lives an elderly gentleman. Guka is small and slight, barely five-foot tall, and walks with a cane, turned out in an ancient suit and tie, his hat at a jaunty angle. Isaac was alerted to Guka’s circumstances by a village elder; hunger had been driving the old man literally insane and he would walk around the village weeping and wailing and talking to himself. He lived in his unfinished hovel on his own, his wife having long passed away and his grown-up children living elsewhere and unable to provide for him.

Njeri I met more recently, when, together with a foreign couple that was visiting me, I went to Shalom to deliver some building materials at Isaac’s request. We found her sitting on the ground outside her shack, listlessly sorting through a meagre portion of maize kernels. Hovering around her were two very young boys who should have been in school but, for want of Sh30, were not.

Njeri was very thin, almost skeletal, and I thought then that she must be suffering from some serious illness. She couldn’t fend for herself and if her equally food-poor neighbours did not share what little they had with her, then she and her two orphaned grandchildren went without. On seeing that Njeri had visitors, her neighbour came over, greeted us and asked me in Gĩkũyũ, “Woka kũmonia njaga itũ?” Have you come to show [these foreigners] our nakedness? I felt deeply ashamed. Njeri died last August; the neighbours tell me no cause was given but she may well have died a slow death from years of hunger and malnutrition.

Kwamboka’s mother died an internal refugee at Mawingu, leaving a teenage Kwamboka and her two younger brothers to fend for themselves. The relationship with the father of her children – two boys and a set of fraternal twins – did not survive the hardship and Kwamboka was left to raise her children singlehandedly in an unfinished shack with plastic walls through which the biting winds of the Laikipia plains blew relentlessly, giving the children snotty noses and permanent coughs.

These are just some of the many residents of Shalom whose lives have been made slightly easier because Isaac did not forget where he came from, and that he was once called Karaka—he who wears rags. With the help of self-effacing well-wishers, Isaac has over the last five years found the wherewithal to finish the houses for Karis, Njeri, Kwamboka, Guka and the many, many others who simply were never going to be able to do so on their own. The houses are nothing fancy, just corrugated iron sheet walls lined with plywood on the inside to keep out the cold, and a covered toilet outside. (There were families that used to have to ask to use their neighbour’s toilet.) Isaac has also found the wherewithal to provide tanks for rainwater harvesting, and solar lights for the homes with school-going children. The elderly also receive a monthly food parcel and this past Christmas a warm blanket was thrown in.

As for Wa-Lillian, she was one of twenty elderly women who each received a small gas cylinder, not from Deputy President William Ruto (who only delivered a political speech) but from Laikipia Women’s Representative Catherine Waruguru. Alas, it did not come with a burner or indeed the stand on which to place a cooking pot but Ms. Waruguru did promise that those would follow. Still, Wa-Lillian might only ever use the Meko until the gas runs out, after which she “will wait upon the Lord”, as she told me. A refill costs Sh900, and she is too old and sick to work. The family survives on the wages that her three school-going teenage granddaughters earn every Saturday and during the school holidays, and on Isaac’s monthly food parcels.