A Diary of a Young African Man 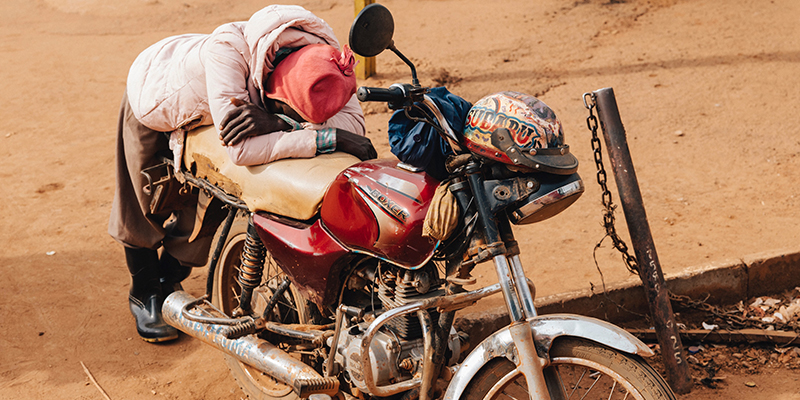 The details are getting hazy now, much to my annoyance. I know I have them somewhere in my many notebooks. But even then, I wrote them down unwillingly, as it meant beginning that process of converting a person I knew into a mere story, or statistic. As any writer will tell you, it is an alienating experience, the last thing you want to do when remembering someone after their death.

My August trip to Ethiopia was marred by the sudden death of one Kagwa. Within the details of the life of someone not yet twenty-five years old, was the story of the crisis of the upper end of Uganda’s youth population bulge, of what also happens when a government abandons its people to the ravages of an economy over which it long lost command.

The actual circumstances seemed clear enough: he was one of the many—estimated to be perhaps three hundred to four hundred thousand—mainly young, mainly male motorcycle taxi operators that have come to wholly dominate the road transportation spaces of Uganda, as in many other African cities.

They have very bad PR: they are seen as lawless, unscrupulous, and often chaotic, especially should one have the misfortune of a traffic entanglement with them. The expected modus operandi is for every other passing rider to stop and engage the motorist in a rapidly escalating war of violent words, and physical threats, usually ending in some type of extortion in which even those that arrived last, and certainly did not witness the accident leave with some form of “compensatory” payment. The issue of who was actually in the wrong is often irrelevant.

Kagwa was as similar to, and as different from, all the others, which is a normal thing with a stereotype—you would be hard-pressed to find any person who wholly conforms to one.

What I certainly do remember is that, like many of his colleagues, Kagwa was not as he wished to be seen. He was in fact a plumber by training, who had found little employment in his chosen trade. Much like the cliché of the restaurants of Los Angeles being staffed by waiting staff who see themselves as actors, many of these gentlemen seem to be at a remove from themselves.

Of the five or six I use regularly, one is also a land broker, another an electrician, there is a lawn cutter and even a police informant. Two others—brothers, no less—are also both grass cutters, and yet another two are chauffeurs who do the school run using the parents’ cars before joining their fellow bikers at the “stage”.

Like with all trades, their skills have deteriorated through lack of frequent use (the electrician once made some positively hazardous “repairs” for me), and so the skill that paid them was ferrying people through the grinding traffic to which they are a contributing factor.

As is to be expected with such a system, the oversupply has created a crisis.

On the one hand, the formal economy has simply not trickled down. There is little formal employment, skilled or otherwise, into which these youth can be absorbed. On the other, two decades of a government policy of dismantling the public institutions—such as cooperatives and agricultural banks—that facilitated a viable interface between traditional agriculture and the modern food commodities market, has progressively collapsed the informal economy, principally rural agriculture.

This has broken a previously frugal but stable rural family-based employment system, and left the youth streaming into urban spaces, or even just urbanising rural spaces in search of new occupations. Often, they have bought a one-way ticket out of the extended family network, cashing in their birthright to make a down payment on their first bike.

This essentially lumpenised economy is the pool into which the human resource from all the other failing sectors drains. It survives because it must.

Having said that, incidents of boda boda riders being killed or suffering serious, often permanent injuries are legion. These young men are heavily over-represented in the orthopaedic wards. Kagwa was in fact the second fatality in our neighbourhood in the space of a few months after one Jjemba was flung helmetless over the bonnet of an SUV that had made a sudden turn, never regaining consciousness after his unprotected head hit the tarmac. The driver—a Chinese expatriate—was forced by a small mob to drive the man to a nearby hospital, but he refused to pay for the cost of a head scan despite having a substantial amount of cash on him, as was later found out at the police station he was then dragged to. The cash may have been more useful to him there, as he was later released without charge after a couple of days’ detention.

And so boda boda riders have acquired a reputation as violent and quarrelsome, a reputation complicated by the interests that then latch onto their predicament, like the constant inducements to work as informers while, ironically, being robbed by thugs pretending to be customers.

To be young is to have hope. So all these hinderances did not deter Kagwa from pursuing his interests. He was a keen member of the very local soccer league, replete with its own legends, and of their occasional jogging gang. He also knew where to buy the most lethal strains of moonshine, which was to be his undoing.

Among those hopes was Kagwa’s desire to become a grown man by starting his own family. This is where the youth crisis bites: at that point of attempted transition into full adulthood, or some semblance of it, through the struggle to secure three things: a permanent home, a family, and a steady income.

Looking back, I can see now that that was the point at which all the situations in Kagwa’s life—born of the crisis in our city and economy-—became unsustainable, and may have indirectly led to his death.

After over a year of knowing him, Kagwa proudly showed me the logbook to his bike. He had finally paid off the last outstanding installments of the loan he had taken out to acquire the bike, which then died the very next morning.

The credit regime is quite burdensome. On taking the loan, one must pay a monthly installment which includes interest and administrative fees. Defaulting makes one vulnerable to repossession, no matter how long you have been making repayments, and then one has to pay off the defaulted amount, the equivalent of two months going forward, as well as a penalty fine to get their ride back.

With some companies, I am told, repayment terms are enforced by means of a hidden tracking device. I am not sure if one had been planted on Kagwa, as his usual ruse of parking the bike in the nearby churchyard and then skulking nearby until the heat was off, usually worked. I learned this from the occasions when Kagwa had apologetically declined to pick me up because he was in hiding from the loan company enforcers.

Once, to my surprise, less than a month after he had fixed his bike, he collected me on a brand new motorcycle, of which he was very proud. I became curious because it was me that had gifted him the money to get his old one back on the road.

This was a life of pressure.

I do recall late one night before Christmas receiving a phone call from Kagwa. He was in desperate search of a chicken, but could not afford the seasonal prices. His wife had made it clear that she expected there to be chicken for dinner, and was not interested in excuses. He knew that I raised hens in the backyard because I often hired him to deliver the chickenfeed.

Kagwa’s wife later left him. Her replacement came with other demands, foremost amongst which was that he begin formalising their union starting with a first customary visit to her parents. This is where the money from the sale of his original fully paid for motorbike went.

Then came the demands for an actual wedding ceremony. All this left him deeply in debt and under such pressure that, according to his colleagues at the stage, it led to him drinking heavily and then riding ever longer hours with hardly a break.

Part of me is left wondering just how much of an accident his crash was. We shall never know. Some witnesses report that he seemed to head straight into the path of the large oncoming car. His chest was crushed and he died on his way to hospital.

Kagwa’s burial took place deep in the countryside, on a piece of land so recently acquired by his estranged father, that his was the first grave in it. The stories that emerged from his colleagues, framed by his modest wake through to his internment, painted a picture of pressure and crisis. And it is from them that I pieced together this picture of an unfolding crisis of unrealisable and imposed expectations.

On my return from Addis, I thought to pay the customary visit to Kagwa’s home, but was discouraged by his resentful workmates, angry with the lady now technically his widow, with whom he had one child to add to the one he had had with his previous wife who had already taken up with another man.

And there we have it: hope and youthful energy preyed on from afar and at very close quarters. A life that begun already foreclosed.

And him nowhere near thirty.