Geometric Circles, Zigzags and Waves: The Anatomy of a Kenyan ID 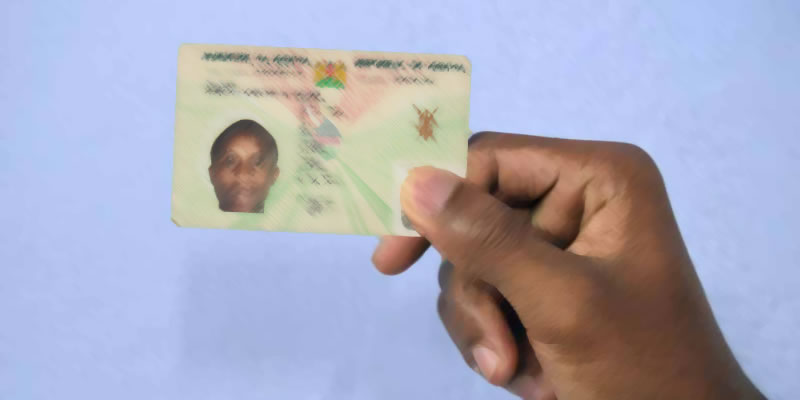 Some years ago, I forgot my national ID in a jeans pocket before a wash and it’s been steadily losing glue ever since. Now at least three corners of this sad rectangle have curled up to expose government paper with my zeros and ones. The card’s many adventures inside the small purse that lives in my handbag are evident. The open border is freckled with dust, eyebrow pencil shavings and a dash of blue ink. Imeona life.

Fifteen years before that peeling skin, that festering wound, had formed, I stood against a classroom wall in Embu to get my picture taken. It was a hot day and the man in a lab coat didn’t allow any of us to smile. We’d been advised to apply for our IDs while still in school to avoid the confusion and long queues at the chief’s camps that would really be practice for the first day we’d vote. (Many years later I would visit this hectic space and secure a new ID only to promptly lose it.)

I’d written to my father, giving him the list of information needed by all Form Four students whose 18th birthday fell within a particular window. His reply arrived by Kenya Posta’s express mail service and was written in red ink, greetings and all. Still visible on the top left column of the frayed card is the district of my father’s birth. Listed below that are the division, location and sub-location. Each concentric circle was intended to lead to where my grandfather lay sleeping. My father, the cartographer, even let me know the exact village and chief at the time, in case that was needed too.

A part of me likes to believe that the countless M-Pesa agents and watchmen and landlords and companies that have accepted this ugly and, quite frankly, suspect identification document all decided to show me a kindness. However, I’m also aware of the privileges that allow me to slip past. It is the security of a presumably harmless surname.

In 2013, I visited a cousin who worked as a dentist in Garissa. It was a largely pleasant nine-hour bus ride, but as we neared the township, our vehicle was stopped and soldiers boarded the bus. I watched with terror as they moved from seat to seat with bright flashlights, asking passengers to produce their IDs. I frantically pawed through my bag but as fate would have it, I only had my NHIF and job cards on me. My cousin had forgotten to let me know that I needed this crucial document. Perhaps it was an assumption that I would naturally have it on me. But at that time in my life, the fear of being pick-pocketed or mugged for my handbag was bigger than worrying whether anyone would question my Kenyan-ness.

That night, the police let me through. On the day I was leaving for home, the bus was stopped yet again. This time the soldiers used magnifying glasses and took their time scrutinising the tapestry of geometric circles, zigzags and waves. I had organized to have my ID couriered from home so I was able to board the bus after the first checkpoint. I had a seatmate, a young lady who was travelling with a small child and an elderly auntie. When we first sat down, she had the child on her lap and we shared polite conversation. At some stage, they disappeared to the back where her auntie was sitting. Later, the lady returned alone.

We got separated when we disembarked the first time but she made it through okay. That is, until we got to the second checkpoint. This time, the soldiers boarded the bus as on the night of my entry into Garissa. The waiting card that had served my seatmate well the first time wasn’t enough for these soldiers.

“Unaishi wapi?” (Where do you live?) asked the soldier, as he examined the laminated piece of paper.

“Basi kwa nini ulichukua hii kadi Wajir? Ebu toka kwa gari.” (Then why was this card issued in Wajir? Get off the bus), he replied.

And that was the last we saw of her. The bus pulled out of the checkpoint amid a flurry of animated shouts in Somali by the other passengers. As I craned my neck back towards the area we’d dropped them, I saw my seatmate being escorted towards a small mabati structure off the road. The conductor then came to sit by me and I asked him if the girl was coming back.

He said, “Huyo tumemwacha kabisa.” (We’ve left that one indefinitely.)

“But the slave who sees another cast into a shallow grave knows that he will be buried in the same way when his day comes…” – Chinua Achebe, The Arrow of God.

Mama, the last of Nyanya Kachui’s nine children, grew up right across from the mosque her grandfather had built and in the area her father had governed as chief. The story goes that her surname, Godoro, came from a joke her father had made when, as a young man, he marvelled at the length of a city bridge and how many mattresses one could fit on it. Her mother’s name was from her diminutive size as a child; she was as tiny as a chick, gachui.

Babu Godoro is buried beside him in Thika cemetery.

Mama was lain to sleep there too.

My other concentric circles.

If we traced my lineage through her, through them, if I was Salma, like my shangazis had wanted, would my tattered ID card still draw laughter if I’d given the district of their birth, listed the division, location and sub-location?

There’s a co-mingling of stupidity and smugness whenever I present my battered ID. They remain even when I’m trusted to enter my details into one of those large black notebooks as a nice security lady goes through my bag. To borrow Brenda Wambui’s term, that visitor’s log, beloved by procurement officers across the nation and no doubt purchased for its endless ruled pages and that no-nonsense hardcover, is speculative fiction at its best. I am simultaneously Wanjeri and Carol of ID 12345678 and neither of us is any safer.

“The alarm at the Ruiru base of the Recce Company of the General Service Unit was sounded at 6 a.m. on Thursday last week. As they gathered, officers of the elite paramilitary unit were informed that a possible terrorist attack had been launched on Garissa University College by suspected Al-Shabaab gunmen.” – Shame of slow response in 15 hour campus terror – Daily Nation

“The Kenya Police Airwing plane was not immediately available to fly the Recce Company on the morning of the Garissa University College terrorist attack because it was flying a small group of civilians from Mombasa.” – How police plane is misused for private mission – PHOTOS – Nairobi News.

One hundred and forty-eight people lost their lives in Garissa on April 5th, 2015.

Every once in a while I think about my seatmate and what fate found her. I hope she came to no harm. I hope her waiting card was accepted. I hope she finally got an ID. I hope her son, if indeed he was her son, was allowed to continue practising his family’s faith without fear; allowed to form a zebiba, a black mark on his forehead from constant contact with his prayer mat, like that on the foreheads of my wajombas; allowed never to experience either the Kasarani concentration camp or the Wagalla massacre; allowed to mourn with dignity first and only in the face of the loss of two sons like it should have been for Haji Yassin Juma.

It is not enough to empathise with the persecuted and the dead but it is a start. It is a virtue that is sorely lacking. This grand project called Kenya calls on all of us to hold space for kindness—the kind that M-Pesa agents and watchmen and landlords and companies and soldiers should show to clumsy girls who carry worn tapestries of geometric circles, zigzags and waves.