Confessions of a Football Widow 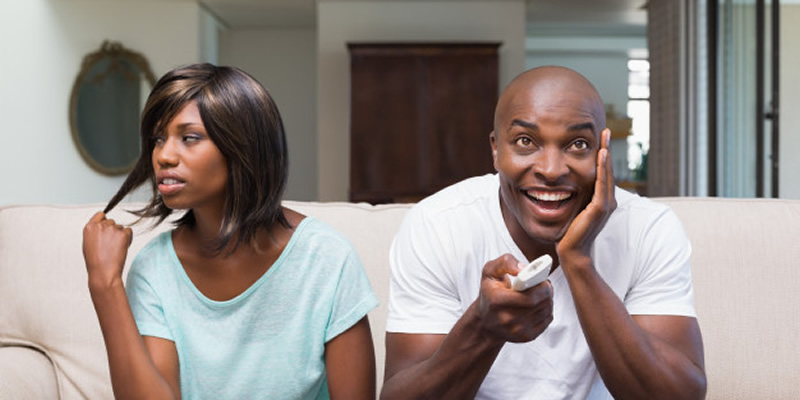 I first started suspecting that I was a football widow when, on a romantic night out with my husband, I noticed that he kept peeking at the TV screen at the bar which was showing a match between Arsenal (his favourite team) and Manchester United. As you might expect, the evening did not go well. I think at one point I might have even suggested that he stay behind and finish watching the match while I go home in a taxi.

There were other signs that indicated to me that I was joining the millions of other women who lose their husbands to the English Premier League every weekend and to the World Cup every four years. Like the time when my husband rushed out of a family gathering to go to his local to watch a football match. Or the time when he sunk into a mild depression when Arsenal kept losing.

Being a football widow – defined as “a wife whose husband spends the majority of his free time engrossed in football during the football season” is one of those unrecognised maladies that afflict many, many women around the world, but is not spoken about openly because football, like religion, has become a sacred sport whose adherents view those who are not converts as belonging to a subhuman species.

Yet, I imagine there are millions of women and children out there who are denied a husband’s or a father’s presence in their lives because of football. How many dinners did these football widows and orphans spend alone? How many conversations were not had because the TV was on? How many relationships were not cemented because there just wasn’t the time to talk, hug and cuddle? As one football widow put it, “At first I couldn’t understand how he could be so obsessed with a game that HE is not playing but just watching…and how does he remember each player on every team and their stats and not remember to pick up our clothes from the drycleaner?”

I have never enjoyed football. I do not support any Premier League team, and I am not among those people who stay up till the wee hours of the morning watching World Cup matches. I do not check the scores of any team on my phone, and as I write this, I don’t even know how many national teams have made it to the knock-out stage at the World Cup in Russia. It’s not that I hate the game; it’s just that I don’t understand the fanatical fascination people (especially men) have with it.

Maybe I just don’t get it. A Google search shows that men have been playing versions of football for centuries but that it only became a formal game with set rules around the 19th century. Some say it was invented in Scotland some 500 years ago; others believe that the Chinese invented it a couple of thousand years ago. What is clear is that men and boys have been chasing balls across fields in almost every culture and society, and that at some stage the game known as football became the most popular sport in the world.

It seems that football’s appeal has even extended to terrorist groups. It appears that Al Shabaab – which has in the past banned football, along with movies and music in the Somali territories it controls – couldn’t resist the “beautiful game” and invented a “halal” version of it, according to a report by Al Jazeera published about four years ago. Many Al Shabaab fighters are Arsenal fans, according to the report, and secretly yearn to play and watch the game. So they have “halalised” it with their own rules.

In an Al Shabaab football match, none of the players are allowed to wear shorts; they must wear tracksuits. Women are not allowed to watch the game, which must finish 15 minutes before prayer time. Team players are expected to abandon the game when there is a call to prayer. Al Shabaab referees don’t give out red cards – players who violate the rules can expect a public flogging. When a team scores a goal, players are not allowed to break into a jig or hug fellow team members. They must chant “Allahu Akbar”. (I wonder how many Al Shabaab members are watching the World Cup this year.)

It’s not like I hate all sports. For instance, I like watching Wimbledon tennis. It just seems like a more mature sport with just two individuals competing with each other. There is brain and brawn in tennis. It is an elegant game, with etiquette. Spectators clap quietly when a player wins; they don’t shout or burst into song. And they don’t beat each other up after a game and go on a beer binge afterwards. There’s no pushing and shoving, no spitting or swearing on the court (US tennis champion John McEnroe being an exception to the rule). But football? Well, it just seems so childish. Grown men running after a ball and bursting into tears or dance when the ball enters a net. And fans screaming and shouting and cursing.

In my opinion, the reason men obsess so much about football is because, like religion, it has become the “opium of the masses”. It numbs people, makes them think less about things that really matter. If everyone is watching football, then maybe they will not notice or worry too much about the billions of shillings being stolen from the Treasury? Politicians prefer it when citizens are in pubs watching football instead of on the streets protesting.

Football is a form of escapism. Men watch football to avoid uncomfortable feelings – it allows them to disappear into a world where they do not have to deal with problems, like a sick family member, the high cost of living, corruption or why their kids are doing badly in school. Maybe football is the cave that men enter to block out the rest of the world.

Football also makes people feel like they belong. Manchester United fans – regardless of tribe, nationality or race – around the world become one community when their team is playing, and go into collective mourning when it loses. While I support the unifying influence of the game, and the camaraderie that it generates, I also question whether it has been invented and promoted to prevent people from confronting real-life issues.

What most football fans don’t realise is that football is a big business that only benefits the players, the coaches, the team owners and sports gambling outfits. The English Premier League, in particular, is a big money-making scam. Millions of dollars are spent in buying players, getting sponsors, advertising and the like so that billions around the world can watch Europeans (with a sprinkling of Africans and Latin Americans) chase a ball across a field. None of this money trickles down to the spectators. Some Kenyan football fans have even committed suicide when their team loses. And now with the online sports gambling craze, many Kenyans are also most likely losing their savings.

In his defence, my husband says that I should be glad that he is only addicted to football, and not to drugs or other harmful habits, and that he only goes to sports bars to watch football and not do things that would truly hurt me – like be with a mpango wa kando. I guess he is right.

But how to fill the lonely hours? My niece, who is a fanatical football fan, tells me I should learn to love the game and watch it with my husband, at home. I tried that and it didn’t work. I was bored within the first 20 minutes.

Stacey Taylor, a football widow writing in the BMWK (Black and Married With Kids) website suggests various things you can do when your husband is glued to the television, such as read a book or two, learn a new language, redecorate the house (except the TV room, of course), take up dancing classes or start a support group for football widows.

I find that writing helps. So does watching Hollywood and Bollywood movies. Nothing beats a good movie with a glass (or four) of white wine while waiting for your man to come home.