Now I Know That I Knew Nothing About Winnie Mandela 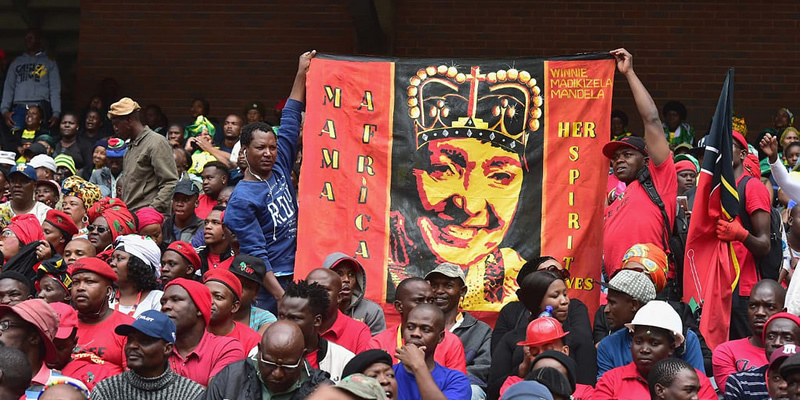 First of all, let’s dispel the myth that ignorance is bliss. It can be. States of unawareness can be a cushion, feathered down and fuss-free, when one needs a respite from the little annoyances of life. But ignorance is not a day-to-day frivolity that many of us, who have always lived on this continent and know the violent repercussions of one misstep, can afford. Clearly there was not a lot of bliss prancing about during the apartheid years and Black people just conveniently forgot to throw a celebratory parade. To call what happened to the majority population during this regime anything less than what it was – a brutalizing of human spirit – would be a supreme disservice.

So let’s rather call ignorance a journey. A series of stops and way-stations where, the passenger, draws ever nearer to something approaching the truth. Or a truth, whatever the case may be. You may, of course, decide to stay where you are. Never exploring, never wandering or wondering, and thus never knowing. There is a smug comfort in knowing that one day the world will come to you, because that is the pervasive and diffusive nature of all things human. The truth may one day find its way to you. But when you’re Black and female, it’s more likely to kick down your door than knock.

I met Mam’Winnie in stages.

My earliest memory of hearing the name ‘Mandela’ was in the mid-eighties. My parents had a staggered bedroom, with a main bedroom that opened onto a dressing room-foyer where us children were sometimes allowed to play, listen to the radio and just watch our parents be parents in muted fascination. On a Liberian radio station is where I heard the song ‘Free Nelson Mandela’ by The Special A.K.A, which was quite a hit back then.

“Who is this Mandela man? Why is he…unfree?” I didn’t even know what to call the opposite of liberty. The concept was very contrary to an ideal that every African and we Liberians especially enjoyed, or so my young mind believed. The only opposite of freedom and joy I knew of was BellehYalla. BellehYalla was our nation’s worst prison, mythical and monolithic in the way it blocked out the sun in every child’s imagination. People sang songs for criminals who ended up in such places?

My father went on to explain some of what life was like under segregation in South Africa, how Mandela was a freedom fighter in jail for a long time for trying to level the playing field for the Black citizens. I fired a lot of questions. My father was one to joke if the rare mood took him so surely he was joking now, about an African country where people had so little and could do even less. Didn’t they own things, like land? Yes, apparently the country was theirs, but then White people came along and took it. But how could that be? Did White people often go around taking massive things like whole countries away and no one did anything to stop it? My father looked especially wry as he answered yes, it did happen all the time and when I was older and studying history, I would learn all the colourful ways how.

I remember one thing I could not wrap my head around: where was this Mandela’s wife, while he rotted away for a million years? What was she doing in the meantime? My father cleared his throat and adjusted his clothes and muttered something about minding the children and keeping the home and waiting.

My mother, who tended to silently watch these occasional educational exchanges between my father and any one of us five children with a mysterious wry smile of her own, came over when he left the room to busy himself with something else. “She’s helping in her own way,” my mother soothed me, knowing I had the tendency to overimagine and get overwrought. “She’s fighting how she can.”

A few years later my own idyll was shattered, if indeed my country had ever truly been the beacon for Negritude and hope that it believed itself to be. The 1990 civil war had me exiled from home and confused about wars, politics and the courageously destructive statements men make. Several years and one too many new countries later, any political appetite I could have had was snuffed out. Coming to live in South Africa, Cape Town no less, as a postgraduate student perked up my interest somewhat. I got to look at a different sort of beast close up. Stories about apartheid came alive. I had learned in my many junior and secondary schools about Bantu homelands and the regularity with which children grew up without a constant imprint of their father because he was away somewhere. Swallowed by the mines, by the cities, by the struggle. I heard much of Robben Island; you had to, with the White tourists pouring in every summer and interrupting your delicious restaurant dinners with their typhoon of tears of how this lovely man had suffered so much and still he forgave. I did not visit that white rock prison until I had some years under my belt, until the Capetonian sunshine had properly baked the overindulgent Mother City into my skin. I wanted to really feel things when I went to Robben Island.

I did not, not much. It was interesting and educational, but not riveting and wrenching. Bear in mind, I considered myself a pretty jaded young woman by this point. Proximity dulls the knife even more. Robben Island was a major tourist attraction in my city and I had learned too much via osmosis to be well and truly, pearl-clutchingly shocked. I was going for the most part to treat my mother, who was visiting at the time. Most of all, it turned out that Robben Island was no BellehYalla. I expected dungeons and neck chains. But flushing toilets, separate cells, regular meals… My knowledge of the typical African prison had never evolved beyond “no mammal should be here”, and justifiably so. But from the looks of things, all prisons were not created equally. Troupe Nelson had suffered, yes, but they’d had some dignity. As I studied the commemorative plaques on the walls, photos of revolutionaries in action, the sacrifice is not lost on me. Still, I looked around and wondered: where were the wives? Where was The Wife?

Sometime during my Cape Town years, in the mid-2000s, a biography of Winnie Mandela was foisted on me. It was ‘Winnie Mandela: A Life’ by Anne Marie du PreezBezdrob, a popular one during that time. I was going to read it without prompting, really I was, but other books of a more fiction-bent, galvanizing nature kept getting in the way. The jaded young woman considered the nature of non-fiction too invasive to be reading material she sought out willingly. Autobiographies and biographies were heavy work of the navel-gazing variety, the payoff often too slim for my liking. I tended to steer clear. But the look on my best friend Inonge’s face brooked no nonsense as she thrust it under my nose, after days of heavy hinting did not work. This was a book we as women, Black women, had to read. I could return to my silly crime and fantasy novels afterwards. Still, I did not immediately relent. Why did I need to know more about Winnie? I knew enough. She had done some important stuff, she was the ex-president’s ex-wife. Wasn’t she bitter now? Wasn’t there a short Google page I could read with just the highlights, some ANC cliff notes? This felt like homework.

So I did some preliminary digging. There was a wealth of intriguing archival memorabilia and articles just a mouse-click away. One online photograph in particular struck me. Winnie in the 1960s, toting a metal pail of water, of something, in the township. So this was where she had been. Gone was the girl in the iconic wedding picture giggling beside her new husband, a girl who, let’s face it, had no goddamn idea what she was getting into. No idea that a nation would start to look up to her in his absence. In her place was this woman forging herself under fire: raising kids alone, facing the daily grind of laundry and assembling meals and assorted etceteras, all whilst in the grip of a police state.

This was what being the satellite parent entailed. The power of notoriety and glory of mystique were never yours, not fully, not when national security perpetually kept your business in the street. You would never be a son of rebellion or sun around which revolutions revolved. The satellite stands vigil and waits. But satellites also absorb information and detonate strategically. The girl was a woman now, her body underneath her cheap polyester jersey softened by children, the stress of her day already shadowing her face. She looked so ordinary it was frightening, because I knew she was frightening. Any woman raising children alone and fielding threats on their behalf knows this reality too well.

She reminded me of my mother. That photo hit me hard.

So I read about the Nomzamo before the Winifred, and put the two together. The book was not without its flaws and omissions of nuance, but it gave flesh and breath and breadth to a woman I had not known, allowed myself to know, was in there. I read more, picked up information from her career over the years and blended colours to make a more complete picture. As I have matured, so have my empathy and understanding. My desire to be acceptable, to apologise like a good girl, to always have my interior world and motives understood are things I crush underfoot as many times as is required to keep my spirit intact.

I knew nothing of Nomzamo-Madikizela. But we journeyed out to meet each other, she and I.