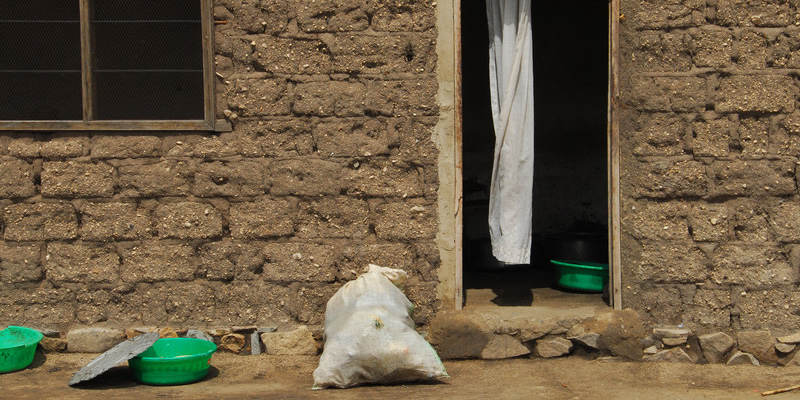 Felistas Waguthi’s mirth is unmistakable: She laughs easily and has lot of hilarious stories galore. When she was young, she must have been stunningly beautiful: chocolate-dark skinned, she is tall and has an athlete’s body. At 75 years and living in Kirimukuyu location in Tumu Tumu sub-location in Mathira constituency, Nyeri County, 140km north of Nairobi city, she has seen it all – but one thing that has been constant – her life has been riven with staggering poverty.

I found her peeling some pint-sized potatoes that looked like marble balls. “The harvest was poor, there wasn’t enough rains,” Felistas told me, in her mud-house that had dangerously hanging soot in the “sitting room”. She cooks, entertains and sleeps in the oblong shaped mud house. I have experienced and lived poverty, but Felistas’s searing poverty was mind numbing in a county celebrated as agriculturally fertile and rich. “We are looking to being given relief maize by the (national) government,” said Felistas. “Many people in my locale do not have enough food.”

On my way to visit her, I had passed through Murang’a County using Kenol-Saba Saba-Murang’a road. I noticed the stunted maize crop that had obviously failed because of the inadequate rains. Stopping in Murang’a town to refill, I engaged some local residents, who told me Murang’a County was already receiving relief maize. I arrived in Kirimukuyu in time to find Felistas with a 2kg packet of unga (maize flour) and a kilo of Basmati rice. “There is a young man here in my village, I knew his father in the 1960s, he is been sending me some foodstuff, especially rice and maize flour – like he has done today,” said the granny.

“All our leaders are capricious and greedy,” ventured the old lady. “They do not care for anything or anyone. They are just interested in self-aggrandizement. They have contributed to this poverty that abounds in this area.” To illustrate her point, she digressed and told me the story of her elder brother. “My elder brother – now deceased had been born disabled, so as the last born, I spent many years looking after him. In his last five years of his life, he suffered greatly, and couldn’t leave the house. ‘Isn’t there something like a national fund for the disabled?’ she posed aloud. There is not an office in Nyeri I didn’t enter. I wanted some help from our elected leaders and government for my brother. When I tell you all these leaders – from the top to the lowest – are only interested in grabbing everything for themselves, believe me. “It is the same young man who frequently sends me flour and rice my way that helped me in those five years that my brother was sick.”

Felistas told me she used to work for an English master in Nairobi in 1965, two years after the country gained independence. “My white boss treated me better than any of our leaders have ever treated us,” said a nostalgic Felistas. “I gave up on our leaders a long time ago: They are masters of deceit and subterfuge. My life belongs to the Lord, who sustains me and who has kept me going all through these hard times. If I had relied on the leaders, do you think I would be alive today?” She was not asking me, she wanted me to  know the contempt with which she held the politicians, who every cycle of five years, came to lie to her, on how they were going to improve her life.

Barefooted, Felistas’s feet told the story of a resilient woman who had faced the vagaries of life stoically. The feet had trekked many kilometres in search of food for her children in yester years and, they were still doing the same for her grandchildren, who were playing outside her mud structure.

“Mathira ya githomo”. The educated Mathira. That was how Mathira, her constituency was once referred to. In the days gone by, Mathira produced some of the best and most educated Nyerians. But today, it has sunk to the bottom of the ladder. “Illiteracy, poverty and unemployment are the order of the day,” said James Karani, my boda boda ride when I was in Karatina. “Do not forget that Mathira is where competing politicians brag on how they can boil a pot of githeri with KSh1000 notes, until it’s cooked.”

Karani took me to Wariruta trading centre, an outpost on the Karatina-Nyeri Road. We met young men who were chewing muguka – a bitter-sweet stimulant of the miraa species, whose leaves chewed long enough makes you feel high. Others were playing pool, still others idled around. “It is at Wariruta that you will find all manner of drugs,” Karani reported to me. “Cocaine, heroine, marijuana, you name it. I grew up in Wariruta and went to school with many of these guys, so we interact, but I am puzzled by how the drugs find their way here.”

Karani told me the young men and women had refused to take up farming. “Look at the farms, there isn’t anything growing or any animal movement. Farming takes too long, the young people do not have the patience for the crops to grow up, when there is betting and hustling. In idiomatic English, a hustler is a prostitute. So, drunkenness among the youth of Wariruta, has become the norm. “The youth have become fatalistic and hopelessness and restlessness has become their way of life,” said Karani. “They no longer believe in the country’s politics or politicians. When Uhuru came to Karatina town to campaign for the August 8, 2017 general elections, the youth yelled and shouted at him when he asked the Mathira people to vote for the Jubilee six-piece-suit. ‘We are farmers, we don’t wear suits’ replied the youth. It was their way of telling him, they were tired of five-year-cycle of politics that had failed to improve their lot.”

On my way back to Nairobi, I wanted to sample the Sagana town nightlife. So, I used the Nyeri-Sagana highway. Sagana is at the “Makutano” junction of Kagio-Kutus-Kerugoya road that took you into the heartland of Kirinyaga County and the Nyeri-Sagana highway. I saw, in the one street town, twilight girls, peddling their wares to the truckers who stop at Sagana, on their way to Meru, Isiolo, Marsabit, Moyale and Mandera. I remembered what Karani in Karatina had told me: many of the youth in Central Kenya have chosen the “hustler life”, which though is replete with avoidable risks, they opted for it nonetheless, because the returns are immediate and rewarding, as opposed to waiting for the rain-fed crops to sprout and be sold in the markets for peanuts.