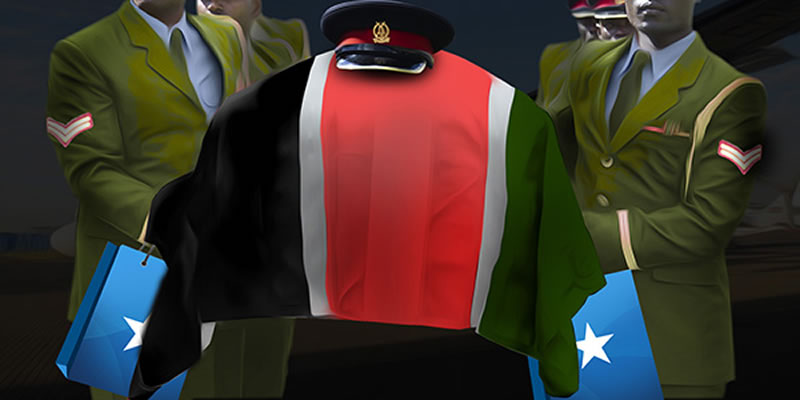 News of Mwalimu Miriam’s son’s death spread in our little cosmopolitan village in Bungoma County late in the afternoon of the 28th of January 2017. I had arrived home the previous day to support my family in the burial preparations for my uncle who had passed away during the week as Kenya’s doctors’ strike persisted.

The immediate reaction of my aunt, as we digested the village’s misfortune in having two funerals in one week, was that the young man’s last sacrament had come too soon. She had attended the thanksgiving service when he had just joined the Kenya Defence Forces (KDF). I gathered that this must have been around 2014.

Soon after, word got around that there was a possibility that 14 men from our constituency could have died in the Kolbiyow attack. I had no way of verifying this. However, understanding the place of gossip in rural areas such as this, I took it to mean that the folks here must have equated this one death to the rumoured number.

I made a point to attend the funeral after we buried my uncle. This was the first time a man on active duty had been buried in this village. The spectacle of a twenty-one gun salute would surely attract many from far and wide.

As the day of the burial approached, I made small mental notes. Mwalimu Miriam is a fellow congregant of the budding Catholic community of which I am a member. I received my confirmation sacrament here. However, many years of travel – for study and work – have turned me into somewhat of a guest there.

Soon after, word got around that there was a possibility that 14 men from our constituency could have died in the Kolbiyow attack.

Mwalimu Miriam is member Saint Lwanga, a small Christian community that my family was once a part of. We are now members of Saint Kizito, following an administrative split due to growing numbers as the church transformed into a parish. I wondered if Lwanga, the Ugandan saint, would receive Mama Miriam’s son in heaven as a fellow martyr.

Word was that Miriam was the last person to speak to her son. He told her they had been attacked. He asked her to pray for him and asked God to bless his family. Later I learned his phone went dead after this. Follow-up calls from his family went through but nobody answered.

Villagers were initially confused about which burial to attend but luckily our committee picked a day earlier for my uncle so that there would be no confusion that weekend. Ambrose had village elder status there but Senior Private Antonio Centenio Kaseyani would have the day on Friday 3rd of February 2017.

In the evening after my uncle’s burial, the tents and plastic chairs borrowed from Saint Peter’s Catholic Church were picked and moved onwards to our hero’s home. I was told his body would be arriving that evening, the first day of the month.

From about 9 to 10:30 at night, loud hooting broke the silence of the evening. The vehicles’ honking announced the hero’s arrival and wailing began. I picked out, from a great distance, the shrieking of a woman shouting for her husband. Was he married?

On the slated day I arrived late for the funeral. My body was still aching from all the chores I had done over the past few days. The ceremony had begun uncharacteristically early. The army wanted to conduct the ceremony and be on their way in good time as well, since they had come all the way from Gilgil.

Various people were giving speeches, as per the programme. The gist was obviously to console the bereaved but I picked out that the community was also in awe of the servicemen. They knew that these young men and women worked under very difficult conditions. All they could do now was pray for the soldiers.

Looking at the burial programme, I noticed it said very little: name; sunrise and sunset; 25 years old; a faded colour picture of the deceased sitting on top of an army truck wheel in combat fatigue trousers and a black Duracell T-shirt.

The local Kenya National Union of Teachers (KNUT) officials came out in full force to support their colleague. Mama Miriam’s son was their son. Solidarity between these public servants was palpable. Teachers and soldiers communed over what it meant to serve this country. It was the best public expression of familial bonds I had witnessed in a long time.

Looking at the burial programme, I noticed it said very little: name; sunrise and sunset; 25 years old; a faded colour picture of the deceased sitting on top of an army truck wheel in combat fatigue trousers and a black Duracell T-shirt.

The testimonies fit well because, according to the history provided, Tony came into manhood at 10 years of age, following his circumcision during Riambuka, the millennium year. It seems he then exhibited unprecedented responsibility in his behaviour from then onwards and took pride in being the disciplined son of a school teacher. Another visible sign of his responsibility was evident from the house he had helped build for his parents and other small improvements he had made on the property.

Family members and friends spoke of anxious moments: a cousin could not reach him; the hope for his safe return; the dismay at his demise: questions to God and self-blame. A role model was lost that day, yet there was no anger expressed by the family. Maybe it’s because they still have relatives who are still in the security forces. Their prayers turned to his surviving comrades.

Every community has its lingo and the word “protectors” emerged when describing the servicemen and women in attendance. Ezekiel, Tony’s father, spoke to the growing numbers of fellow mourners. He thanked the military for their courteousness. The information they received as a family was clear and so his mind was at rest.

Tony had been supporting his father and his family in whatever way he could ever since the old man had a near fatal accident some years back. The father walked with a crutch but it was clear that the loss of his son was hurting him more than anything else.

Family members and friends spoke of anxious moments: a cousin could not reach him; the hope for his safe return; the dismay at his demise: questions to God and self-blame.

I had the opportunity to meet Lieutenant Colonel Paul Njuguna, the Kenya Military Spokesman, at a seminar on countering violent extremism. He is a tough intellectual cookie and knows how to handle information in the wake of a tragedy. At the service, he was adamant that the military’s improved communication strategy was primarily to: maintain operational security during the occurrence of an event; to preserve the morale of troops since others would still be sent into dangerous theatres either to rescue or replace comrades, among other roles; and to show concern for affected families whose members have either been injured or killed in action. For him, no amount of social media white noise could derail this mission. He believes that soldiers are not politicians and they have work to do. It dawned on me that sometimes it is so easy to infuse our politics in all manner of events without any hint of compassion.

Mzee Ezekiel revealed the love of Tony’s life. His relationship with Rispah had not been known to the family but as the old man got to Nairobi it came to light that his son even had a six-month- old child named after his mother. He had mixed emotions: the pain of losing a son and the joy of having a grandchild. He blessed the KDF soldiers and introduced Rispah.

Rispah’s relatives had come to terms with the nature of their daughter’s relationship and were patiently waiting for the young man’s return from Somalia before formalities could be initiated. This loss was a shared pain with their daughter that obligated them to travel beyond all the ridges and rivers of Tetu in Nyeri to say farewell.

Elder uncle Maina introduced the family. A retired soldier with 15 years of experience under his belt, he spoke of the oath to defend Kenya’s internal and external interests. He acknowledged the deceased as his son’s age-mate. Rispah did not say a word but her sister spoke of phone conversations over two days before the Kolbiyow attack. It was heart-wrenching to fathom how this blossoming friendship would now be a sad memory. Tony’s friends followed. Their youthfulness failed to disguise their hidden fury as they gave tributes. They wanted to go get back at “them”. A younger cousin now wants to join the army.

A colleague, an instructor at the KDF Nairobi School of Transport, took the opportunity to urge others within the constituency to join a welfare group they had conceptualised with Tony for those under the age of 35 years. It was clear that mine was a war generation.

The oath in defence of the country came up time and again. It was obvious that enlisting in the army for these people was more a duty than a burden.

Tony’s other cousin turned out to be the young man who came to pick the tents and chairs from our home. He mentioned how he encouraged Tony to join the military and how they subsequently became part of the same artillery unit 155. He is stationed in Garissa.

The oath in defence of the country came up time and again. It was obvious that enlisting in the army for these people was more a duty than a burden.

The village “headman” – who happened to be a woman –urged people to register as voters. I found it interesting that her speech followed the speech by Tony’s friend who served with him in Mombasa and lived near his place in Nairobi. She wanted to kick ass too.