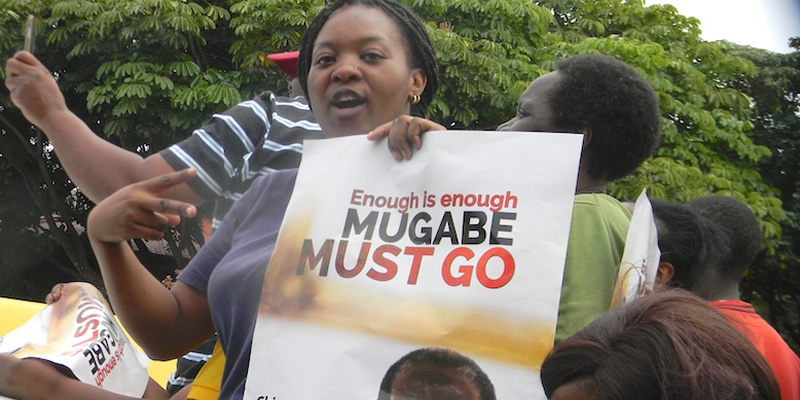 18 November 2017. A day that polarised Zimbabweans. The majority of Harareans heeded the call to march for Robert Gabriel Mugabe to resign after 37 years in power. People who had never attended a single political gathering came out from the suburbs, the ghettos, everywhere.

“I had to play my part in putting paid to the ever increasing horrific prospect of his loose cannon mouthed wife, Grace becoming our next president,” said Tatenda Shava (27) of Highlands, one of the affluent areas of Harare. This was the “Walk” crew.

Zimbabwe had been simmering for some time. The economic downturn was worsening by the day. But the ruling party leadership was focused on its own factional fights instead of looking at the plight of the people.

In a perfect world no one would have wanted the army to step in. But they did and there was no turning back. Rumours of the regional block Southern African Development Community (SADC) intervention to prop Mugabe’s continued rule galvanised the people. Anything, even the army, had to be better than that.

But even then, there was a small number who were warning that unwary citizens were celebrating a military coup and would soon live to yearn for the return of Mugabe. Emmerson Dambudzo Mnangagwa, the deposed Vice President, and his miltary handlers would turn on the citizens and cause us untold suffering. Someone quickly labelled these naysayers the “Woke Brigade”. ‘Why join ZANU in their rejuvenation?’one of them, a Zimbabwean writer, asked. Despite this, Mugabe was toppled and Mnangagwa is now the interim President.

In all this, the leading opposition, Morgan Tsvangirai’s Movement for Democratic Change (MDC) has been caught short. After years of fighting for Mugabe’s removal, suddenly they find themselves in the battlefield with their main opponent gone. They are struggling to deal with the new ZANU whose leader seems determined to show that he is not the usual wine in the same bottle. Self-serving concentration on issues like enfranchising Zimbabweans in the Diaspora for the 2018 key elections and nitpicking on election dates because of a few weeks discrepancy is sadly not winning the MDC any voter sympathy. In addition, among MDC supporters, there is a call for Tsvangirai to step down and let his party rejuvenate itself.

“I did not want to vote for Mugabe. But I could not in clear conscience vote for Tsvangirai either. The man has fought a good war, but he is just not fit to run for presidency any more. He needs to step aside, let his party find new leadership and he can use his brand to drum up support for that person,” said a prominent Harare lawyer.

And here we are.

President Mnangagwa, commonly known among Zimbabweans as ED raised expectations of immediate change with his ‘hitting the ground running’ inaguration speech. Then he announced a cabinet which mostly consists of many of the old faces who failed dismally under Mugabe.

“I don’t know who I would have put in considering that he needed some sort of continuity and also that the pool of elected ZANU MPs is diluted by factional issues. But still this was a disappointment,” summarised Douglas Muwani of Harare.

Dr David Parirenyatwa remains in charge of the Health Ministry. This is a sore point for most citizens. The health delivery system is deplorable. Are we to see a continuation of leading politicians getting medical attention outside the country while the ordinary citizen struggles to access ARVs, insulin and other lifesaving medications?

Military faces are in.

Retired Air Marshall, Perrance Shiri who was in charge of the Air Force of Zimbabwe is the new Minister of Lands, Agriculture and Rural Resettlement. Retired Major General Sibusiso Moyo who became the face of the ‘Corrective Action’ for the Zimbabwe National Army is now the Minister for Foreign Affairs and International Trade.

The police are being ‘assisted’ in their duties by the army. The combined teams have brought order in the small towns of Kwekwe and Mutare by moving vendors and public transport operating from undesignated points.

The police-army teams have moved to change things in the capital, Harare.

Not everyone is happy to see clear pavements and the smooth flow of traffic. They empathise with those trying to earn an honest living in the face of high unemployment rates. More importantly there is worry over the constitutionality of using the army as a supernumerary police force.

There is speculation that General Constantino Chiwenga, the Security Chief who announced the ‘Corrective Action’ will be appointed Vice President. It was reported that the army generals actively took part in discussions on the cabinet make up.

This has fueled conspiracy theories: What else are the military involved in behind the scenes? Is Zimbabwe under a military state?

The Woke Brigade are crowing about how they were right. Daily they find a reason to ask the Walk Crew: Do you regret cleansing this coup by marching on 18 November?

But logic says it is too early to feel disappointed. For too long the opposition and ordinary citizens were pining for the departure of Mugabe. He became the sole face of Zimbabwe’s woes. In some people’s minds once Mugabe was gone, the situation would auto-correct. Now we are finding out the hard way that there are no miracles and we have to live the change one day at a time.

Right from the beginning General Chiwenga spoke about the economy. President Mnangagwa keeps repeating that the economy is his main focus and after less than two weeks in office it is too early to say if he will make a difference.

The cabinet has been trimmed, even if it is not ideal. Ministers have been told to come up with short term achievable targets to improve the lives of the ordinary people within a week. There has been no presidential trips for more than four weeks, a first in a long time. I am sure we have already saved considerable millions in foreign currency right there. Mugabe’s last jaunt to the United Nations General Assembly reportedly cost the Zimbabwean taxpayer US$3 million.

But the real suffering is still there.

Queues of people waiting for hours to get a few dollars from the bank are growing longer by the day. While the jubilation over Mugabe’s exit has been going on, somehow prices have been creeping up in the shops. A 2 kg packet of rice that costs $2.30 at the beginning of the month is now at $3.

Can the finance minister pull off a budget that will jump start the economy? Britain and China expressed their willingness to work with the Mnangagwa government. Indeed there even seems to be a tussle between the two countries as to just who deserves the honour of being the new best pal for Zimbabwe. The UK named itself Zimbabwe’s oldest friend. China restated their position as the all weather friend who has stood unflinchingly with the country. The US also indicated that they expected to enjoy better economic relations with the new government.

The road ahead is tough. But hope is still in the air.