I Long for a Different August 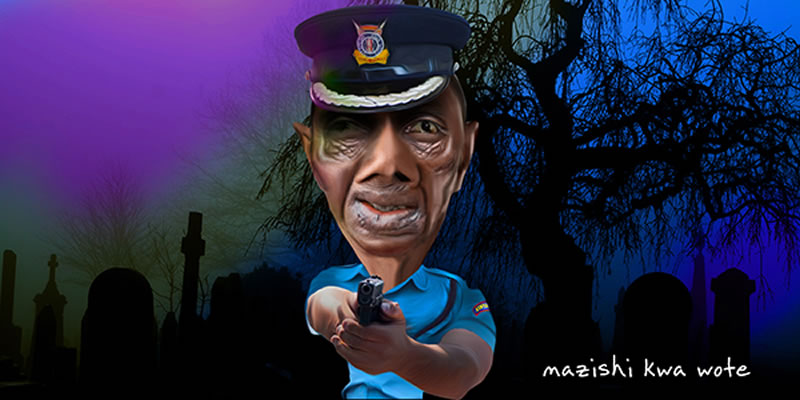 Since I was a child, I have been acutely aware of conflict and deeply concerned with resolving contentious problems. That has made for an interesting outlook considering that since my birth in August 1982 until this day, my community in Nyanza, Western Kenya has been under regular attack from state forces because of the egalitarian values we seek to uphold, in stark contrast to the neocolonial, capitalist, patriarchal ideology steering government.

I now live in New York City and have lived here most of my life. I do not have the privilege of a single point of view. I hold at least four in my mind at all times: a Kenyan Luo woman, a feminist, a black person in the diaspora and an African aware of racialized scrutiny by Westerners. Right now, I am writing this editorial from my apartment in New York. Yet, the sounds of jackhammers fixing the road, people on their daily commute, children goofing around and sound systems blasting classic tunes, cannot take me away from Nyanza. Though I have lived abroad for years, returning now and then, Western Kenya is always very close to my heart. Even in this bustling city, I have a palpable sense of urgency. I feel as though this moment, with Luo identity under attack amidst disconcerting apathy in Kenya and abroad, is different from others.

In this moment, as America shows itself to be a feckless global leader, with a government incapable of healing national divides and Kenya bumbles along in similar fashion though with greater promise as a nation ascending rather than in decline; this is a time when truth comes to light no matter how long it has been kept in the dark.

In America, the lie of white supremacy is coming undone while in Kenya, the neocolonial construct of “tribal” supremacy and unfettered corruption is being confronted.

I was born during the coup of 1982, in August. The story goes that I was born just before the evening curfew and my father was able to see me before he had to rush home. Daniel Arap Moi was president and his brutality as head of state was highly effective in suppressing dissents and crushing the notion of Kenya as a democratic republic. The story of my birth and politics swirling about at the time have informed my entire life, though not intentionally.

From my first breath, I intuitively understood that freedom isn’t free and yet it is the thing I value above almost all others. One might say that I have committed my life to the preservation of freedom of expression as writer, producer and activist. My mother, is a doctoral anthropologist and feminist, while my late father was a civil servant. Both of them led very improbable lives, committed in their own way to the promise of post-colonial Kenya having been born under British occupation. My mother made the greatest impression upon me with her keen understanding and research of our ethnic culture before colonization as a matrilineal society where land passes down through the women. She was fortunate to be raised by a feminist mother and father who did not undermine her potential as a girl child. Thankfully she treated me with the same respect, empowering a critical thinker, open to sometimes contradictory ideas in pursuit of universal truths.

In America, in the month of November 2017, a white man with a history of domestic violence walked into an idyllic Texas church in Sutherland Springs and indiscriminately murdered 26 people, injuring 10 more with a semi-automatic weapon. In the States, this has been the deadliest year on record for mass shootings. A nation that purports to be the leader of the free world. Please! Although this country works very hard to churn out propaganda that makes it seem that radical Muslims and rabid black protesters or gang members are out here shooting people left and right, it’s patently untrue.

According to research by Mother Jones, since 1982 Muslims have committed arguably 4% of mass shootings and black people 16%. But whites, mostly men, are responsible for some 54% of mass shootings. They are never called terrorists. Even Timothy McVeigh, a white supremacist, who by most accounts is a terrorist for the 1995 Oklahoma City bombing that killed 168 people, was never formally charged as a terrorist because the U.S. ascribes all federal charges of terrorism to foreign agents. White men are the true American terrorist and yet, the capitalist interests of bodies like the National Rifle Association (NRA), a pro gun lobby worth $27 billion, and political interests like the Republican party, funded by an oligarchy of racist white male billionaires, have no interest in the truth. Some are actually calling the American problem with mass shootings, an epidemic, because incidences of gun violence are spreading and body counts rising.

Just this past week, a self-proclaimed ISIS terrorist of Uzbek descent killed 8 people in New York City with a rented vehicle and a gun. Following this tragedy, most Republican politicians were calling for stricter immigration laws to stop the scourge of “Muslim extremists.” And yet, about a month prior a white man murdered nearly 60 people and injured about 600 more with an arsenal of many legally purchased guns, and there was no political will from the White House to handle the situation.

You see in America, arguably the leading third world democracy given they trail every developed nation in analytics, the single story of white male supremacy trumps any potential remedy to the epidemic of gun violence. If this nation were to admit that billionaire white men are pulling the levers of the Republican government. That these same oligarchs do not care about their poor and working class white male counterparts. That all they really care about is money and power that would disturb the carefully crafted single story that white is right in any form that white male domination takes.

And yet, the cat is kind of out of the bag since the election of Donald Trump who has inspired unprecedented pessimism in white male leadership in the midst of rampant violence.

Thinking about the emergence of Kenya after independence from colonization, I can see that the apathy Kenyans feel for the unbridled violence and cruelty towards Luo leadership and citizens is similar to the marginalization and misinformation piled on Muslim residents or citizens and African Americans in this country. The single story in Kenya entails that the wealthy are the most qualified to lead. That the Kikuyu hegemony and whomever aligns with them are the most competent to hold public office. That the Luo critics are the most insolent in their consistent challenge to oligarchic power. That bombastic self interest is a signifier of true leadership while egalitarianism is a pipe dream. That those who beat and kill with impunity have the divine right to do so. That like people of color in the US, Luo people are deserving of demonization despite overwhelming facts to the contrary (even allowing for those who fall short of appropriate conduct), and that British imperialism by African proxy like American imperialism propagated by whiteness is paramount to human rights violations.

Since Kenya entered a war with Somalia, Kenyan people have endured unprecedented mass killings with innocent people falling victim to Islamist terrorism at the hands of Al Shabaab. To witness the slaughter of 148 students with dozens injured in Garissa or see the horrific charred remains of upmarket Westgate mall following a mass shooting that claimed the life of 67 people and nearly 200 injured, has been difficult to say the least. Its public knowledge the war with Somalia is a proxy for U.S. interests. This conflict has only made Kenyans more cynical and mistrusting of one another and I cannot see how it helps Somalia given all the tragic attacks recurring in Mogadishu. So when America like other foreign observers claims the August 8th elections were free and fair after the murder of a high ranking IEBC official, Chris Musando, the whole affair becomes wholly suspect.

The Luo as a community, not to dismiss the sacrifices of other Kenyans, have suffered a lot in the challenge to contentious governance. We can look to the laundry list of assassinations including Tom Mboya and Robert Ouko, the countless imprisonments of dissidents like Jaramogi Oginga Odinga and Achieng Oneko, or the recent murders of IEBC officials Chris Msando and Caroline Odinga, who sadly suffered sexual assault before her cruel end. All Luos on the frontline challenging the status quo have been released from earthly duty by unchecked violence. And these are just some notable figures, there are countless more “nobodies” whose deaths remain unacknowledged and their memories erased.

In this moment in America, black people have learned their lesson about being scapegoated, mistreated and killed by white men with unchecked power. Muslim Americans are learning the same lesson. This is not to say that all of the oppressed are saints, but that most of the oppressed are indeed victimized. When we look to ongoing protests that employ nonviolent tactics akin to Mahatma Gandhi and Martin Luther King, Jr. in the fight against modern police brutality, racist violence and mass incarceration that too often claims black and brown people’s lives, I feel optimistic.

This optimism holds true because advocacy for one’s community can sometimes remind those capable of empathy that there is value to every human life. Though, justice is unlikely to come from the state; people who understand their human dignity, patriots in search of a nation that lives up to its constitution and citizens who understand the power of their vote have the means to change hearts.

Mandela showed us once before and young American activists in various urban centers protesting police killings and the questionable Muslim travel ban remind us today. My experience as a Kenyan immigrant with consciousness as a Kenyan Luo woman, feminist, black person and African among Westerners is one of longing.

Longing for the day that my people, who have often been on the right side of history, will be respected and protected, for the enormous love we have for Kenya and her children. Until then, as always, we will lead by example and I hope that is enough.

And maybe one day, in another August, outcomes will be different.